Shortening Towers: The Pyramid and The Obelisk

Supertall buildings seem to get a bad rap in most cities, apart from New York, Chicago and anywhere in China. Ok, so they aren't always appropriate. Placing something 2000 feet tall like the Burj Khalifa in San Francisco - I would oppose due to being so way out of scale with the rest of downtown.

That all said, seems like whenever the new tallest building is proposed in San Francisco, it's always shortened. When we look at the Transamerica Pyramid and the Transbay Tower they have experienced somewhat similar fates. (For simplicity, let's call these two brotherly "Trans" towers, Pyramid and Obelisk. America and Bay doesn't have quite the same ring.)

So what would the Pyramid have looked like if it were built to 1,150 feet. Images of the design are very scarce apart from one shown on SF Gate (see black and white image below). So using my crude Photoshop skills I made an image of what it might look like from Alamo Square. The second image shows what the pyramid's original design looked like.
Based on the view from Alamo Square it doesn't look so bad from what I see. Sure it would have been MUCH taller than anything else, and probably a bit out of context. However, the pyramid shape does indeed reduce the impact, and would have been more graceful with steeper pyramid sides due to the taller height.

More on the Transbay Tower, Towering Inferno and images after the break.


The original Transamerica Pyramid was to rise 1,150 feet, only 50 feet shorter than 1,200 foot proposed height of the Transbay Tower. The Pyramid was only built to 850 feet, while the Obelisk will be built to 1,070 feet. It is interesting to note that the proposed Pyramid would have been taller than the currently planned Obelisk, by 80 feet.

Both have had their designs adjusted and heights reduced by over 100 feet. Seeing as the Transbay Tower, er Obelisk, has only been reduced 11% compared to Pyramid's 26% reduction, maybe San Francisco has warmed up to taller buildings. Below is a chart looking at their differences and similarities including their height reductions.

So at least the Transbay Tower has played a trick – by increasing its "crown" height from 127 feet to 150 feet in spite of reducing the overall height by 130 feet. Is this a trick to make the tower look just as tall as before or is it just a concession as has been mentioned to concerns over shadows since the crown will allow much more light to pass through? Who knows. 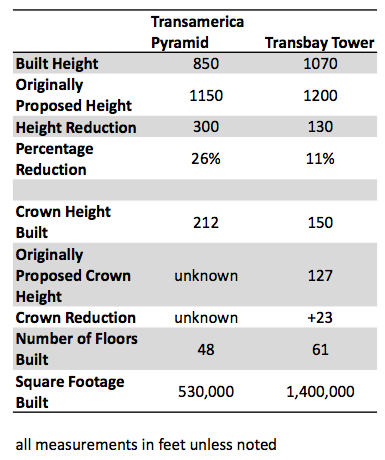 I won't be commenting on the new "slit" being added to the crown. All explanations I've heard sound like architecture smoke screen for "Oh no, the building looks weird and squat now that it's shorter, so add a slit." or "Oh no, you guys in San Francisco all realized the building is a virtual copy of Hong Kong's Two IFC Tower. 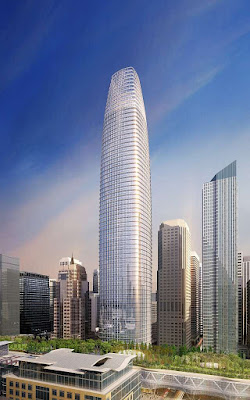 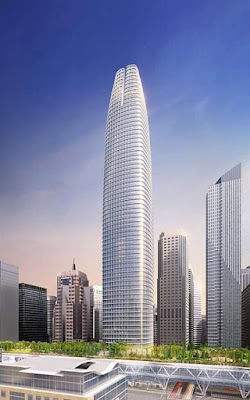 Transbay Tower (renamed Salesforce Tower) before and after the slit was added to the crown.

Before ending this curiosity over tall buildings and their height reductions. Let's not forget the "greatest" of all tall buildings "proposed" in San Francisco. The Glass Tower from the film, The Towering Inferno, was a tower you couldn't forget. At 134 stories tall, and a reputed 1,834 feet tall, it would have sure stood out, so much so that the film makers had to add an extra fictitious tower in San Francisco to balance out the height (and allow folks on the top floor to escape by a wire jerry-rigged between the two buildings.)