SPUR just published it's new Urbanist (March 2012) with the title: Navigating a Better Future for Transit. The cover has my map depicting current Bay Area transit (rail and rapid buses). Inside, there's also an article on "A Possible Future" with an article and map showing potential future rail and rapid and BRT buses like Geary BRT, and El Camino BRT. I specifically made the map for SPUR. The map shows what is possible, but is also offered as a discussion piece to help determine which projects are most important and what mode might be the best for certain corridors.

Note that the majority of the projects, routes, and modes reflect current Bay Area planning. However in some cases, the mode or route has been changed. In other instances, some new routes have been suggested. For example, BART to Livermore and Dumbarton Rail are two projects that are not included in this map. Instead, access to Livermore from BART is provided by bus rapid transit, and the Dumbarton corridor is served by rapid bus service. New projects that are not currently part of planning, or are in their early phases include projects like the Oakland Emeryville streetcar down Broadway, Capitol Corridor crossing at Vallejo, and 101 Rapid in the Peninsula.

The map shows all major rail, light rail, streetcars, and rapid bus lines. Each mode is differentiated by their line width. Colors vary to show each mode of transit.  All rapid bus lines are marked in light green, BRT is light blue, metro commuter rail is orange, and metro subway is red. You can see these maps and some of my map photography at my flickr account.

If you would like to have a larger version of the map, which shows much more detail, send me an e-mail at brian.stokle@caa.columbia.edu. 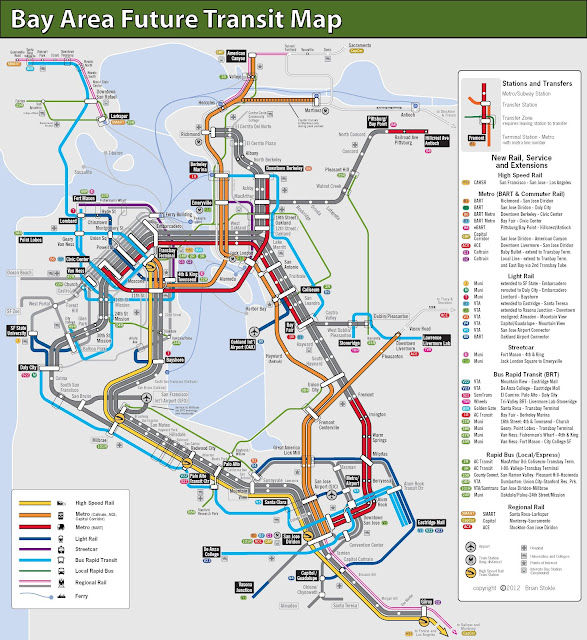 Close Up of Oakland and Berkeley

Close Up of San Jose

Close Up of San Francisco

Close Up of Vallejo and the Carquinez Strait Area

Please feel free to comment. The maps are not meant as a definitive plan or my own opinion, but rather a discussion and debate point.