What with today's BART Transbay Tube Maintenance Train Tossup and the ongoing Bay Bridge Bolt Bust, it calls to mind that we really need a third viable option for crossing the bay from Oakland to San Francisco. Our region's economy and vitality relies on these two work horses of transportation. However, they are at virtual capacity and if anything goes wrong, the whole region goes into a traffic tailspin.
In the last few years, several events have caused the Bay Bridge or BART to shut down or severely reduce capacity and create traffic hell. Remember the falling steel brace in 2009 that caused a 6-day emergency closure of the bridge? That caused BART to break its one-day ridership records at the time.  Likewise, remember the three alarm fire near West Oakland BART station that shut down the tube during the morning commute. That same day, a major motorcycle accident closed all westbound lanes of the Bay Bridge for several hours.


So we have had several incidences of the bridge closing, or the tube closing, and in one instance BOTH!

THIS IS NOT GOOD. We must be better and call for and build a much more resilient system with multiple redundancies. A Second Transbay Tube must be built. So many issues are calling out to have a second tube built:

We must prioritize our transportation projects. Building BART to San Jose, although good overall, is a lower priority, than a second tube. Adding carpool lanes and widening freeways (e.g. I-580, US-101) are great, but the work horse of the Bay Area that provides the most commuting muscle are the Bay Bridge and the Transbay Tube and they need help.

Building a Second Transbay Tube would be very expensive. Being expensive means we need to plan now! because it will take up to 10 years to plan. We must also  find ways of funding this critical piece of infrastructure. Too often we through up our hands and say, "oh it's expensive, but we need it." and then put our heads in the sand. It will be MORE EXPENSIVE to the region if we don't build the Second Tube and the regions economy slips or fails due to an earthquake or ongoing emergency bridge and tube closures. In the meantime, a contraflow lane should be set up on the bridge so more buses can cross the bridge.

A new tube could be built using BART tracks, regular train tracks (Capital Corridor, Caltrain, High Speed Rail) or both. Linking a new BART tube would go through SOMA and on to Geary Street in San Francisco. The commuter rail tracks could bring Caltrain to the East Bay via the tube, or Amtrak Capital Corridor to San Francisco and the Peninsula.

SPUR has looked into this issue in its Resilient City series. The SPUR transportation report found, as the graph shows below, that the Bay Bridge and BART cannot meet the demands of the other when one is shut down (Scenario A & B), although they have some extra capacity. However if both are out of service, ferries cannot take the slack and we have an economic meltdown if the crisis were to last several days or weeks.

We already know where we could build the Second Transbay Tube. If a joint "four-bore" tunnel were built (2 BART tracks, 2 commuter rail tracks), the Oakland side could have BART from its existing Broadway or 7th Street alignments. A commuter rail tunnel with future high speed rail capacity would branch off of the existing rail line near the Port of Oakland. In San Francisco, the BART tunnel and/or the commuter rail tunnel could enter the city at Folsom Street, King Street or even Mission or Howard streets. 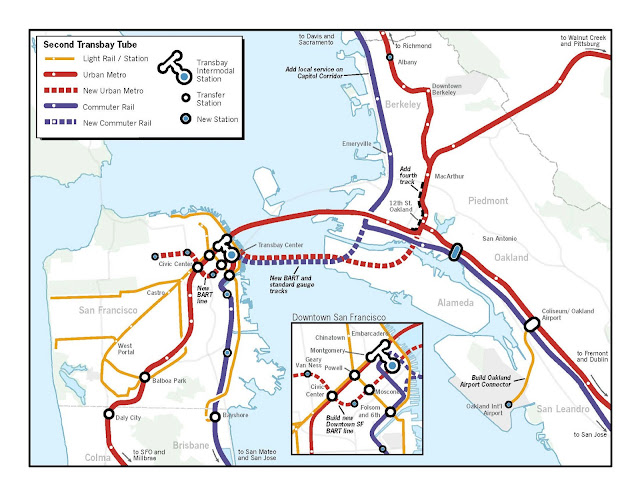 So let's get started! Stop making stop-gap fixes to the system, stop wasting time and money with extensions that bring few riders. Build the infrastructure needed to make the East Bay and San Francisco and the whole Bay Area resilient, strong and reliable.