The results from June's SoMa BART poll have been collected and tabulated. Thanks to all of the 93 people who voted. Not quite the 100 I'd hope for, but a sufficient number to be statistically significant.

a TIE between Folsom Street and Townsend/King St! - both of which received 30 votes or 32% of the votes. 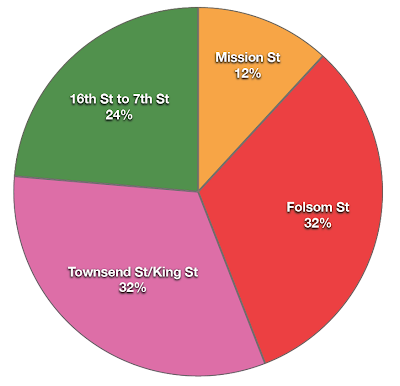 All throughout the voting Folsom Street and Townsend/King were neck and neck. Alas, they are both very popular alignments. The dark horse candidate, 16th St to 7th St received a surprisingly high 24% of the vote, while Mission Street tripped out of the gate and never had a chance.

Although this was in no way a scientific poll, it does show that there is great support for both the Folsom and the Townsend/King alignments. I introduced the 16th St/7th St alignment to shake things up a bit, and succeeded in doing so. Many folks supported it for going to many areas that wouldn't be served by either the Folsom or Townsend alignments.


Here's a rundown of the pros and cons of each alignment based on the criteria laid out in the initial poll announcement. I've used a point system ranging from -1 to +2 to demonstrate how each alignment succeeds or fails in each criteria.

Based on the final scores, it makes sense that Folsom and Townsend/King tied for first place. However, they achieved it through very different means. Folsom earned its score through earning points in each category, while Townsend/King earned points in all categories except alleviating Market St demand while receiving especially high marks for serving new areas, but did not alleviate the demand on Market Street due to its 0.8 mile distance from Market St.

Service to New Areas
Folsom provides the best access to areas that will receive the densest job growth in the next 10-20 years based on existing zoning. However, if zoning is changed in parts of SoMa, including the 4th Street corridor and the Caltrain Railyard is redeveloped, then the Townsend/King and 16th/7th St alignments could serve much more dense employment areas.


Interconnections
All of the alignments connect with the existing BART and Muni Metro lines along Market Street, and all of them connect with an existing or likely future Caltrain Station.

High Job Growth Areas
The issue of high job growth areas is very debatable. Although Mission Bay is receiving much of the attention now, it will ultimately only add moderate job growth compared to the existing Financial District (between Folsom and Washington Streets). What can change these scores is if employment density can be increased along any of these alignments. If parts of SoMa (e.g. along Townsend or 7th Street) or Mission Bay/Showplace Sq were allowed to have more dense buildings, including midrise (~10-15 stories) and some high rise buildings, then there would be room for much more job growth. If such zoning were changed, then the Townsend/King Line might earn 2 score instead of a 1, and possibly the 16th/7th St alignment.

Alleviate Demand on Market St
Clearly the Mission and Folsom alignments (and a Howard alignment) would help alleviate the high demand at BART's Embarcadero and Montgomery St stations. Townsend, King and clearly 16th Street are too far away to spread out the demand. However, if BART builds the new side platforms at Embarcadero and Montgomery before a Second Transbay Tube is built, then the need to alleviate demand there is not as pronounced, with both Townsend/King and 16th/7th St fairing better.

Some have indicated that it appears pointless to place a subway parallel to an existing line. However, when we look at other large cities in the world, there are often 2-3 lines parallel for multiple blocks. In Chicago, the combination of the Loop and the Blue and Red lines are parallel for on 3 to 4 stations on each line.

New Stations
Although the new line would have new stations built along it, this subject covers where a new station would be created in areas where no stations currently exist. Although my initial maps do not indicate station locations, the second post showed rough locations where they could exist. The Mission line creates no new stations when you consider it's at the doorstep of the Transbay Center. This is somewhat true with the Folsom line, although it could be argued that a stop between Fremont and First on Folsom does not exist today and is sufficiently far from Transbay to be considered a "new" station.

For Townsend/King, if the route followed either Division/Van Ness or the preferred 7th Street a new station could be created on Division or at 7th and Bryant respectively, and open up regional access to these areas. It's the 16th St/7th St alignment that would add two new stations - one at Mission Bay on 16th St at the UCSF Mission Bay Campus and its hospital, as well as a Showplace Sq or 7th Bryant Station in Southwest SoMa.

Final Thoughts
Finally, all of this is somewhat of a premature analysis, as it doesn't really integrate the other tunnel - the Downtown Extension Tunnel (DTX) for Caltrain and HSR. In an upcoming blog, I will fully analyze how the combination of a SoMa BART and a DTX alignment can work together, along with the existing Market Street Subway and the Central Subway to create a very well served greater Downtown San Francisco and strengthen it as a job center for the entire Bay Area.
Email Post
Labels: 4th and King alignment BART Central Subway density employment growth Folsom future Mission Bay poll Powell Street results Second Transbay Tube Townsend Transbay Terminal Transbay Tube