Muni's New 55-16th Street Route, Where have you been all this time?

Next Monday, January 31, Muni officially starts a brand new bus route to service Mission Bay from the Mission District. The temporary 55-16th Street route will run from  the 16th Street Mission BART Station to Mission Bay at Third St and Mission Bay Blvd. With the growth of Mission Bay with the UCSF campus, new office space, residents and the opening of the UCSF Medical Center, transit access to the area desperately needed.
However, Mission Bay with the university campus, biotech firms and other companies, has been quite developed for over five years now. Why hasn’t a Muni bus route from the Mission been started earlier to meet transit needs?

The short answer: Muni has lacked funding, but more importantly, a quasi transit service was getting folks to Mission Bay anyway.

The Original Plans
Transit service from the Mission and points west has long been planned for Mission Bay. The original Mission Bay Project EIR (1998) called for rerouting the 22-Fillmore to follow 16th Street to Third Street, and terminating at Mission Bay Boulevard and Third Street. This was reiterated in UCSF Mission Bay CampusMaster Plan and Design Guidelines (1999) planning documents. However it appears that Muni ran into logistical and funding challenges to have the overhead electric wires added along 16th Street between Kansas St and Third St. I haven’t been able to find the exact history of Muni’s funding requests, but it appears that it has yet to receive funding to for electrification of 16th St that a rerouted 22-Fillmore would require. In addition, installing wires at the Caltrain railroad crossing  has proven technically challenging, due to the high vertical clearance required so trains do not hit the wires, but the buses trolley poles can still reach much higher wires at the crossing.

The Red Line
The UCSF Red Line shuttle has ensured service for UCSF’s employees and students to and from BART at the 16th St Mission Station. Although the shuttle only allows employees, students and patients on board, this policy hasn’t been enforced on any UCSF Shuttle line (until recently). We’ll get into this more later.

Consequently, with the opening of Genentech Hall, UCSF Mission Bay’s first building, in 2003, the Red Line essentially provided a de facto public transit service between Mission Bay and Mission Street, even to non-UCSF affiliated employees or residents living and working in Mission Bay. Although most shuttle riders would have been to UCSF back in 2005, growth in non-UCSF employment has grown rapidly in the past five years. According to the UCSF Transportation Department, the Red Line shuttle service more than doubled from 2005 to 2014’s 3,000 weekly riders. This unofficial arrangement whereby UCSF shuttles permitted non-UCSF affiliated riders on board worked well until ridership growth created overcrowded buses.

I know of several people who worked at Mission Bay, but not for UCSF, that used the UCSF Red Line shuttle from the 16th St Mission BART to get to work in Mission Bay almost every day of the week. The shuttle was free, convenient, and was a virtual express bus with only one bus stop in the middle at the UCSF Mission Center Building (at Folsom and 15th St). However, in the months leading up to August 2014, the shuttle had been getting quite crowded during peak periods - sometimes even having folks stand. This on shuttle that aren't really set up for lots of standing room.

UCSF was aware that non-UCSF people were using their service. In August 2014, five months ago, UCSF changed its practice of not requiring IDs, and started requiring Red Line riders to present UCSF IDs to verify their affiliation to the university. When asked why they started enforcing their long held policy, the UCSF Transportation Department said, “When shuttles are too full, our internal community has to shift to personal vehicles, which increases our impact on both the local community and environment.” So the shuttles had be come too popular and UCSF riders were sometimes not able to board buses.

Furthermore, UCSF seems to have clarified their thoughts on what their shuttles are and what they are not in their 2014 Long Range Development Plan states:
The shuttles are not a substitute for City transit,
which is used primarily for commuting between home and campus,
but as an alternative to traveling by private vehicle between campus sites.

Mission Bay Shuttle
Some may be recalling that there is a different shuttle that is called the Mission Bay Shuttle. This shuttle is not affiliated with UCSF, but rather is a private service of the Mission Bay Transportation Management Association. In non-transit speak, it’s an organization of Mission Bay employers and residents (but not UCSF) that offers commute hours shuttle service from Mission Bay to the Caltrain Station and Powell St. Station. Unfortunately the Mission Bay shuttle does not provide service to the west to the 16th Street BART station. 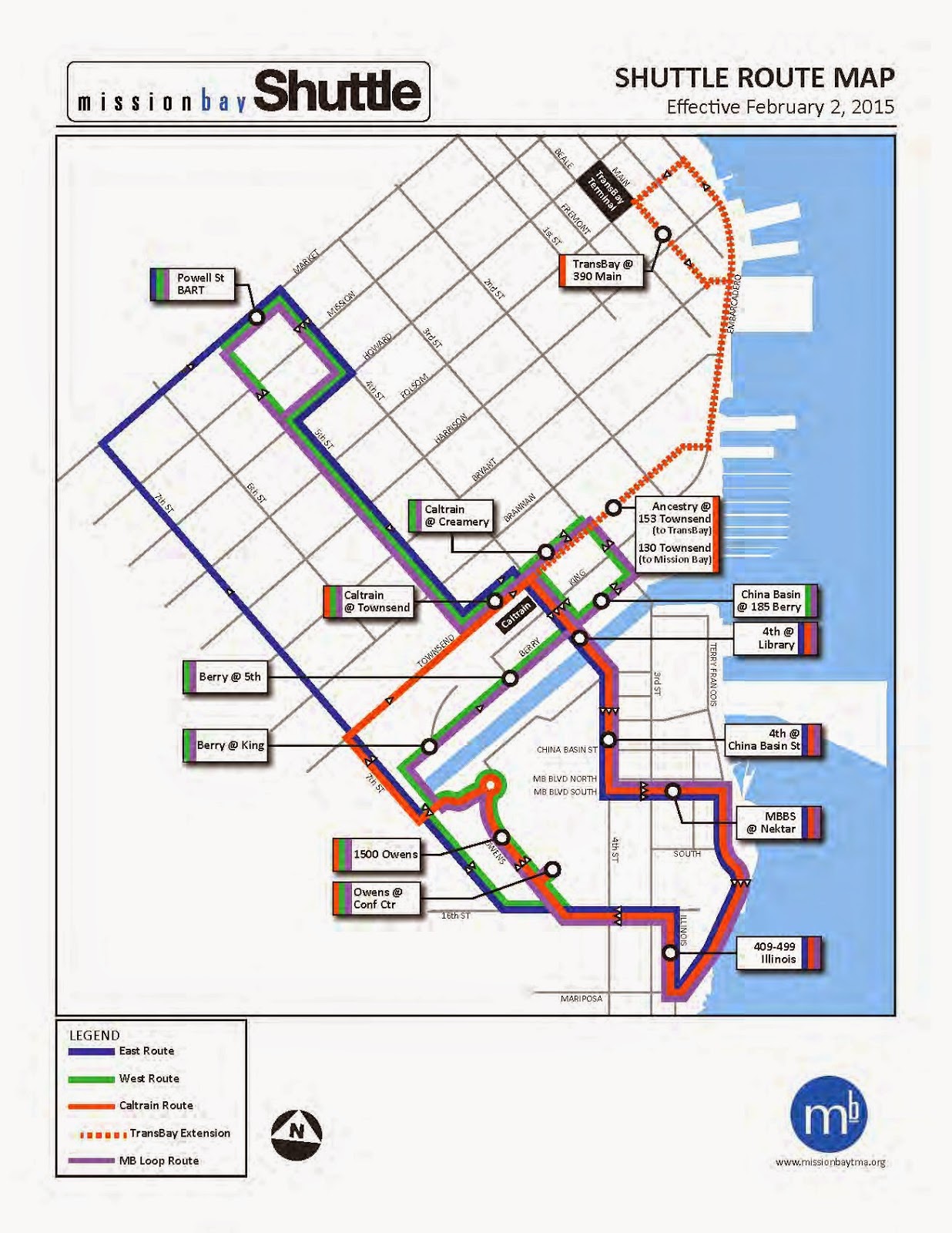 Out of Luck
When UCSF started requiring IDs, all of the non-UCSF employees were out of transit luck. Sure they could take the T-Third from Embarcadero BART station, but as many know, the T-Third is neither frequent or reliable. In addition, a journey that once took 15 minute shuttle ride, would take a 30 minute BART and T-Third journey that requires a transfer.

Luckily the Mission Bay Shuttle is more reliable than the T-Third. So some employees who once took the UCSF Red-Line may have shifted to taking BART to Powell Station and transferring to the Mission Bay Shuttle there. Unlike the BART train, or the T-Third, which had their own rights-of-way, the shuttle bus mixes with general vehicular traffic. During morning commute hours, the journey from Market St to Mission Bay was not congested. However, during the evening commute, traveling from Mission Bay through SoMa to Market St proves very congested.
So from August 2014 to January 2015, there was no effective public transit from 16th St and Mission St. Muni has been planning to upgrade 16th Street with some transit only lanes, as part of its Muni Forward project. Unfortunately, UCSF did not inform Muni of the new enforcement policy. Might Muni have ramped up its 55 line service earlier if UCSF had warned Muni of its upcoming enforcement practice change - probably not, however Muni may have been better prepared.

New Muni Line Begins
Luckily the 55-16th Street will officially begin this Monday, January 31. In fact it actually already started its “soft” launch yesterday, January 26, so you can already ride it. According to SFMTA’s Jeffrey Flynn, the soft launch is meant to tie in with UCSF Medical Center’s own “soft” launch of the new hospital. The new route will be on system maps. However the "New Muni Map" will not be released until Spring 2015, in a few months.
The 22-Fillmore is still planned to be rerouted and have the 33-Stanyan rerouted to cover the 22’s routing through Potrero Hill and ending in Dogpatch. The rerouting will be part of a larger Muni Forward project to improve service to the 22-Fillmore in addition to physical improvements along 16th Street including transit only lanes and transit bulbs. Sadly we likely have to wait for a few years before electrification and street improvements occur. We have to wait for funding and transit planning to go through its community process.
Email Post
Labels: 16th St 22-Fillmore 33-Stanyan Mission Bay Mission Bay Shuttle Mission Bay TMA Muni bus overhead wires Red Line rerouting Sixteenth St UCSF UCSF Medical Center