Normally, a high and prominent peak it get's noticed. However, when it's a ridge, often shrouded in fog, and has two different names, you get confusion. On top of that, in San Francisco, it's a crowded field of peaks, so it's hard to get noticed if you don't have a monument, lavish homes or a radio tower on top. Welcome to Golden Gate Heights, err Sunset Heights - some of the highest peaks in San Francisco you never knew existed. 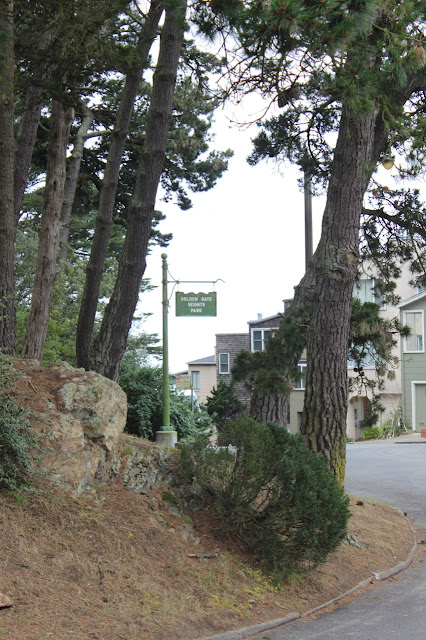 In this installment of Forgotten Hills, we look at the Forest Hill-adjacent hill, that's really a ridge that has two competing names. The hills are less like Mark Twain/Samuel Clemmons, and more like Franklin W. Dixon/Carolyn Keene/Edward Stratemeyer of the the Hardy Boys and Nancy Drew book series. You probably barely know of the authors' existence, let alone the fact that the Hardy Boys and Nancy Drew series were originally written by the same man.

Golden Gate Heights are a north-south ridge between Kirkham St to Taraval St. The ridge has four peaks, although the USGS map technically shows six peaks. To me, GG Heights is essentially a prominent and high ridge with three somewhat prominent peaks:

The heights lie due west of Twin Peaks and slightly southwest of Mt. Sutro and Clarendon Heights with the Midtown Terrace neighborhood and Laguna Honda ravine lying between them. To the east is the Sunset District gradually sloping down to the Pacific Ocean. The West Portal neighborhood to the south. To the north is the Inner Sunset neighborhood, with Golden Gate Park with Strawberry Hill a further north. 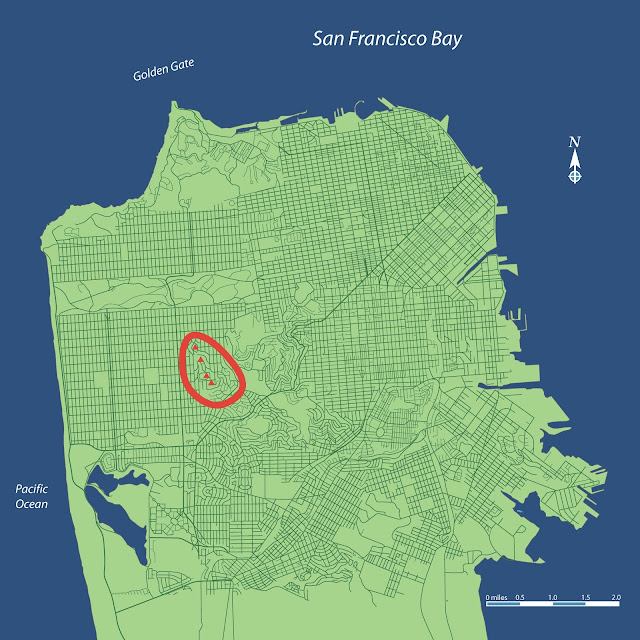 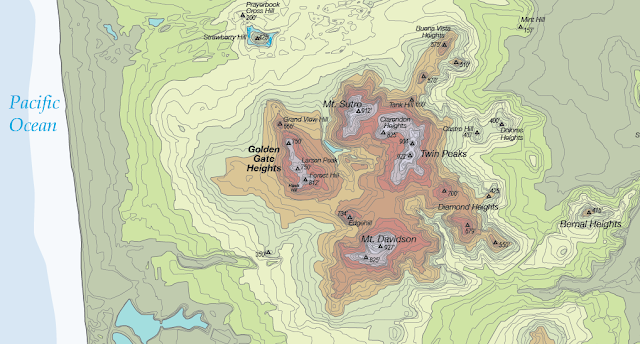 Even the peaks have naming confusion. Grand View Hill is sometimes called Turtle Hill, and has also been found misnamed  as Larsen Peak. Larsen Peak is sometimes called Golden Gate Heights or Sunset Heights. Hawk Hill is not really a hill, but rather a steep slope of the southwest flank of Forest Hill. The only peak void of confusion is Forest Hill, the highest peak. Below is a breakdown of each peak, going from north to south. 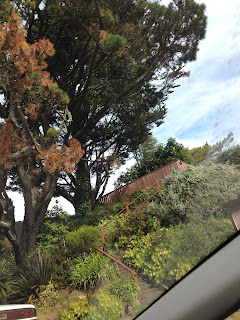 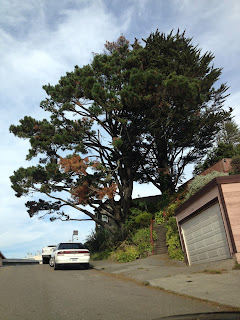 However, we're talking about a geographic feature AND a neighborhood. When confronted with the street grid imposed on a hilly area, we generally follow streets to define neighborhoods. Several sources have given Golden Gate Heights its boundaries: 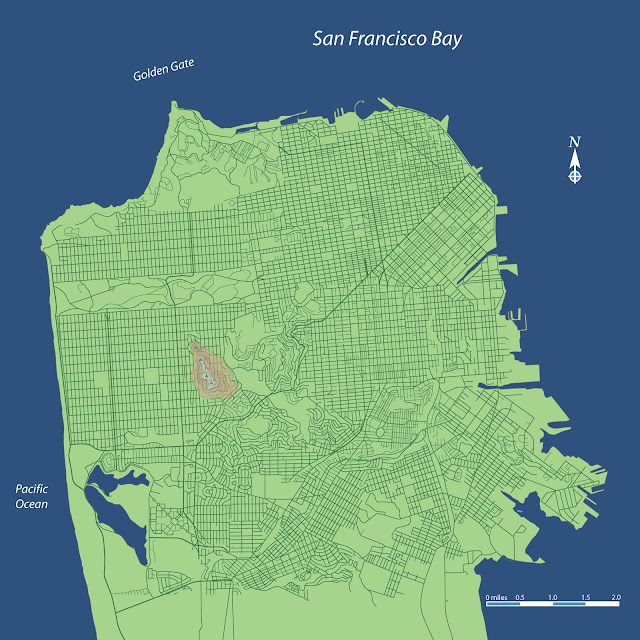 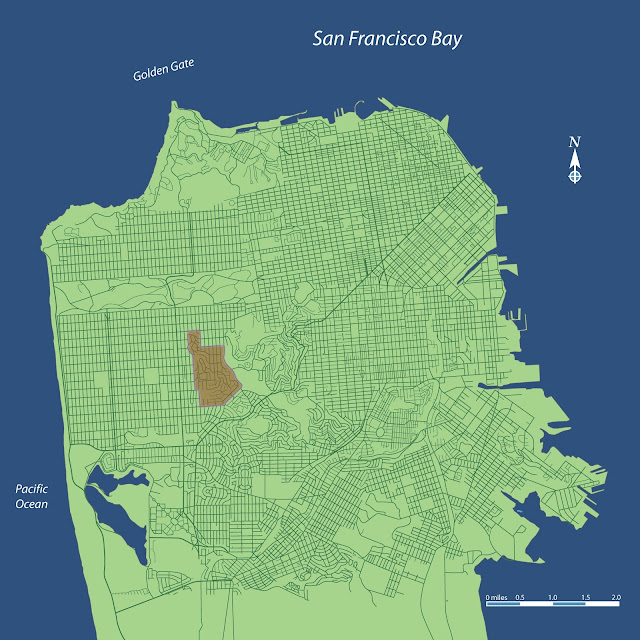 History
The heights themselves seem to have been developed with streets in the 1920s. Most home construction occurred in the 1940s and 1950s.

Height
The peaks of form a bit of a sloping ridge. Forest Hill rises the highest, up to 812 feet above sea level. The peak is topped by a water tower and a small radio and cellular tower. Several 20th Century condominiums are located at the deadend street of Mendosa Ave where the peak can be reached. 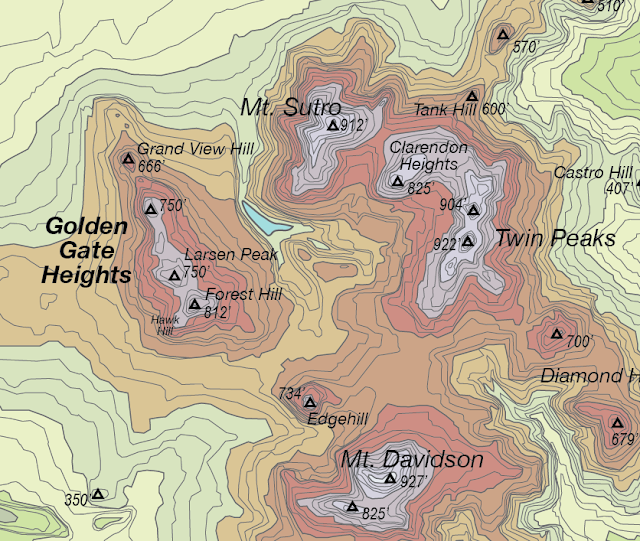 Nearby Larsen Peak is located in the wooded Golden Gate Heights Park. Rising 761 feet, it sometimes appears closer in height to Forest Hill due to the trees atop it. An unnamed peak is located further north on the ridge, rising to 750 feet, slightly lower than Larsen Peak.

Finally, Grand View Hill ends the ridge to the north. The peak is more prominent that you'd imagine and has a very recognizable peak covered in grass and a single tree.

Views and Prominence
The views from Golden Gate Heights quite stunning. Looking west to the Pacific, you feel as if you're perched above the ocean at 700 feet high, in spite of the 2 mile distance to the beach. To the north, Grand View Hill offers stunning views of much of San Francisco including Golden Gate Park, The Presidio, but also to Marin. I have yet to climb to the top of Grand View Hill, but am due to.

Due to the ridge nature of Golden Gate Heights, only the highest peak, Forest Hill has a higher degree of prominence at 312 feet. The three other peaks have very little official prominence:
However, if you figure in my version of "relative prominence, the Golden Gate Heights ridge overall has the following prominences from each direction:
If you're interested in finding a more comprehensive list of San Francisco's hills I suggest going to SF Gazetteer, or to 47hills.com. SF Gazetteer is true to its word when it states "The most complete and accurate list of San Francisco hills." I am in a huge debt to all the work that SF Gazetteer did to compile its list of over 70 hills and the research on each of them. 47 Hills has a shorter list but many more photographs of the hills, or the view from them.v
Email Post
Labels: 360 degree view golden gate heights Grand View prominence ridge sunset heights