Golden Gate and SamTrans do it? Why not AC Transit?

All buses converge on San Francisco's Transbay Terminal, all buses from other counties that is. SF Muni buses can go wherever they want to - it's their county right?
But you, the bus rider, the customer, simply want to get to your destination, whether to work, to visit a friend, or to enjoy a ball game or a night out. If you come into San Francisco from San Mateo County, or Marin County, you can take SamTrans and Golden Gate Transit buses respectively. If you're coming in from the East Bay, most folks take an AC Transit bus. Sure there's BART, and ferries, but many folks do not live near a BART station, so a long distance bus does the job.

Golden Gate Transit and SamTrans weave their way through the city's streets along Van Ness, Mission, and Potrero streets, dropping off folks as they enter. The Transbay Terminal (currently the Temporary Transbay Terminal) in downtown San Francisco is their final destination, and their first pick up point. They then pick up people along their route through San Francisco as they leave. This allows for some of customers to get to destinations other than downtown with a once seat ride, or a single transfer.

AC Transit does not offer this option. If you're going to San Francisco from Alameda or Contra Costa counties, and you're on an AC Transit bus, you get off at the Transbay Terminal. If you're going beyond Downtown San Francisco, you're required to make a transfer to a Muni bus or Muni Metro, or BART (if you're lucky). Note that when the new Transbay Transit Center opens to buses in 2017, bus routes and operations will be very similar to today's operations.

Let's consider some destinations in San Francisco that an East Bay AC Transit Transbay bus rider might want to get to, and how they'd get there after arriving at the Transbay Center.

The bus transfer makes sense in most cases. The majority of AC Transit Transbay Riders are likely going to Downtown San Francisco, so a special AC Transit bus to the Haight may not make sense due to low demand. However, what about high demand locations in San Francisco that are not within walking distance of the Transbay Center? An AC Transit route to a high demand location might be better served by an AC Transit route to avoid transfers and possibly induce more transit ridership (and reduce vehicular traffic on the Bay Bridge).

In addition, some AC Transit Transbay riders, may not even have San Francisco as a destination, but rather somewhere in San Mateo County - which they would reach via Caltrain. In this instance, a rider must walk 2-3 blocks from the Transbay Center to the Folsom St. Muni Metro Station. Board an N-Judah or T-Third, and then transfer again at the 4th & King Caltrain station to board a Caltrain train. For example, if you live in Alameda, but work in Downtown San Mateo, you must transfer twice, and pay three times.

I propose that some AC Transit Transbay buses go to a handful of high demand San Francisco destinations other than the Transbay Center. The 4th & King Caltrain Station, Civic Center, Mission Bay, and even parts of SoMa far away from BART. Buses serving these new SF destinations could be extensions of existing routes - stopping at the Transbay Center first, and then moving on to another area in San Francisco, or they could be completely new routes.

"Passengers utilizing AC Transit to cross the Bay Bridge must transfer to another transit service to reach their destination, unless within walking distance. The forced transfer is a deterrent for potential AC Transit passengers.

If the Bay Area Toll Authority recommended this idea in 2012, then why has it not gained traction. Is it funding (for drivers and/or vehicles)? Politics as in Muni won't let AC Transit do it, or AC Transit isn't interested? or something else?


East Bay - Peninsula Connection
While we wait for the Caltrain Downtown Extension (DTX) to find funding and be constructed, we need an interim solution for folks to get from the East Bay to the Peninsula. Currently BART users have the option of getting to Caltrain by transferring at Millbrae or switching to Muni to reach the 4th & King Caltrain Station. Both options take a long time.

BART to Millbrae (BART - Caltrain)
Transfers at Millbrae are not timed well, and only Red Line trains (Richmond to Millbrae) serve the line. This means that if you lived in Rockridge or East Oakland, you would require a transfer at Daly City to get to the Millbrae station, then a transfer in Millbrae to get onto Caltrain. Such a trip would cost $5 on BART, and $2.75 on Caltrain (assuming use of Clipper Card) for a total of $7.75.

BART to Muni to 4th & King (BART - Muni - Caltrain)
This path requires two transfers, and requires folks to pay three times, not just twice as a BART-Caltrain would. A person going from Berkeley to Redwood City who takes Muni would pay $3.90 for the BART trip, $2.25 for the Muni trip from Embarcadero to 4th & King, and $4.75 on Caltrain, assuming they used a Clipper Card. That is a total trip cost of $10.90 one-way.

AC Transit Transbay Bus to 4th & King (AC Transit - Caltrain)
In contrast, an AC Transit Transbay bus could connect the East Bay to the Peninsula much better with a strong single transfer. AC Transbay service from Berkeley or Oakland costs $4.20. A trip from 4th & King to San Mateo or Redwood City costs $2.25 for a grand total of $6.45.


Destinations
Fourth and King
Fourth and King Caltrain Station could be accessed several ways. As shown in the map, new routes could access the station by exiting either Fremont St, Harrison St or Fifth St exits.

For Fremont St, buses could stop at the current Temporary Transbay Center, then go down Howard or Harrison to Second Street, and on to Townsend heading westbound, with new bus stops across the street from the station between 4th and 5th streets or between 3rd and 4th streets. Buses would then return to I-80 via 5th Street onramps. 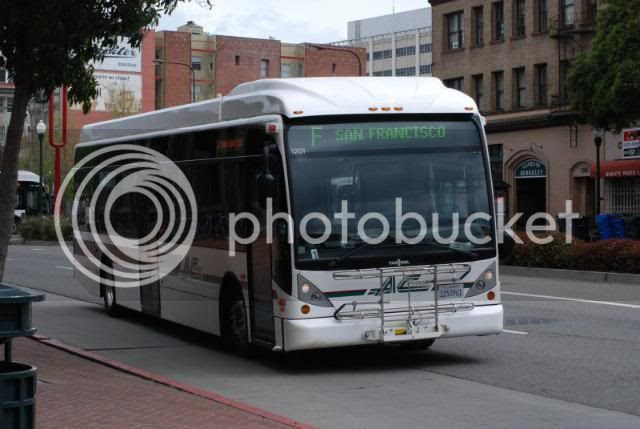 The 5th Street exit could have buses go south down 5th, and turning left onto Townsend. Because the 4th & King Station is already quite crowded with bus stops along Townsend and 4th St, new bus stops could be placed in a number of locations:
Mission Bay
Another option is to have Fourth and King buses continue on to one or two Mission Bay destinations. With UCSF Mission Bay, the new hospitals, and more businesses and residents in the area, building providing better bus service to/from the East Bay would seem to make sense.

If Transbay buses stopped on King Street at the Caltrain station, they could continue south via I-280, taking the 18th St/Marioposa St exit, looping south to Mariposa and stopping at the hospital on 4th St where there is plenty of frontage along the curb. Buses would the route back north along Third St or Fourth St, and back on to I-80 near the Bay Bridge.

Civic Center
Although Civic Center is along the BART spine, as mentioned earlier, there are many East Bay residents and destinations nowhere near a BART station. Civic Center has many government jobs, and many other jobs following the arrival of Twitter in the Mid-Market area.

Buses could easily access the area from I-80 by exiting at the 9th St exit, heading north along 9th St, across Market onto Larkin St, passing Civic Center Plaza. Bus stops already exist for the 19-Polk bus in front of Civic Center Plaza. The route would loop back via Hyde and 8th Street or Polk and 10th Street, entering back onto I-80 at Bryant and 8th St. A longer loop could have the have buses turn east onto Golden Gate and south on 6th Street, returning to I-80 at the Bryant and 5th St onramp.