I recently made a visit to the UK and France - principally to visit family and friends. However, I couldn't help but notice many of the changes their cities are undergoing, and also how their streets and transit systems have similarities and differences from ours. Below are a few observations I made in Norwich, England, the first city I visited:

Bus Gate (a sort of Transit Neckdown): One Lane - two directions - bus only/taxi only
Here's a location where buses go in both directions, but the street crossing with a neckdown goes to a single lane for two reasons:

Before the bus gate the street looked like a normal two-way English street near the city center, as shown in the Google Streetview below, still available online. 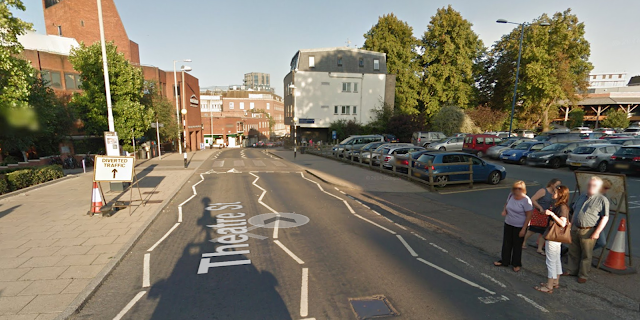 Now the street entering the city center has normal vehicular traffic required to turn right into the parking lot on the right. Buses, as shown in the next two images, must go through the "bus gate" that is also a raised crosswalk. The buses going inbound yield to outbound buses.


This second image shows how the bus on the far side of the neckdown is about to go through, while the bus I'm in is waiting for the other bus to pass by.

Parking lots with cobble stone parking stalls
By paving the traffic lanes of the parking lot, but installing "cobbled" stone parking spaces where water can infiltrate the ground, this parking lot design appears to be a great combination of practical and enviromental.

Having the traffic lanes, where the most vehicular traffic passes, and the most wear and tear occurs, in paved form makes sense. A dirt rutted lot doesn't make sense. Parking spaces receive the least wear and tear and activity, so they are the target locations for designs that have water infiltration. Planting grass is good for little used lots, however for busier lots, a cobbled or stone layout with space between the stones allows much more water infiltration than a classic asphalt paved parking space. 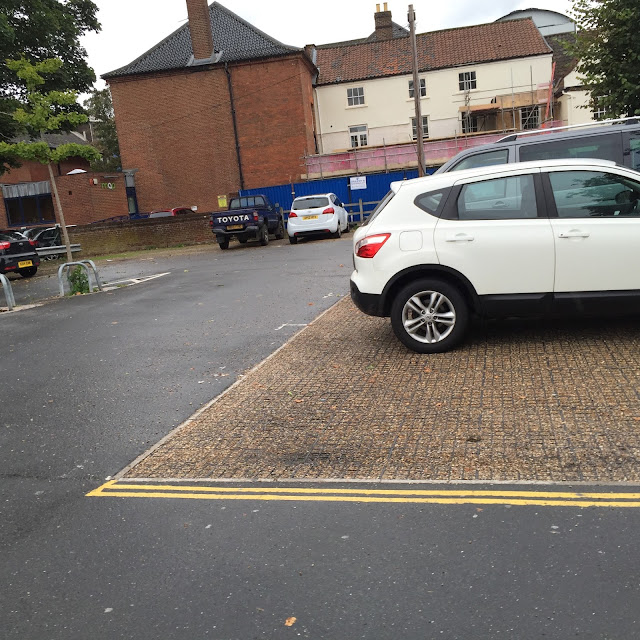 20 MPH Slow Zones on residential streets
Many studies have shown that the risk of deadly injury from vehicles is reduced to nearly zero when cars travel no faster than 18 or 20 miles per hour. Looks like Norwich has instituted slow zones on purely residential streets and put some colorful perspective to the speed limit signs. Many of the signs  graphic image were different on each street. 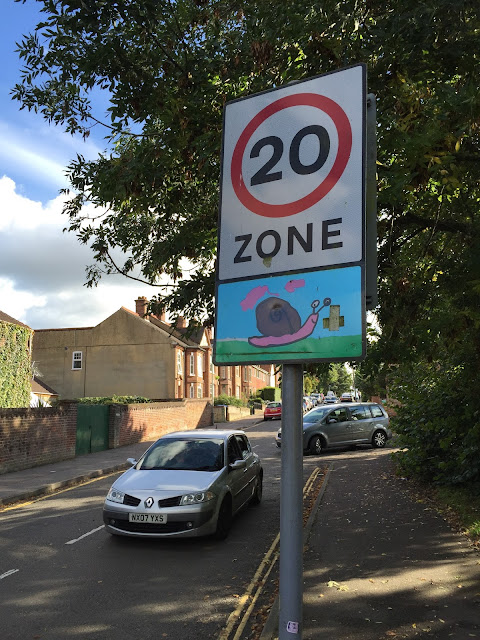 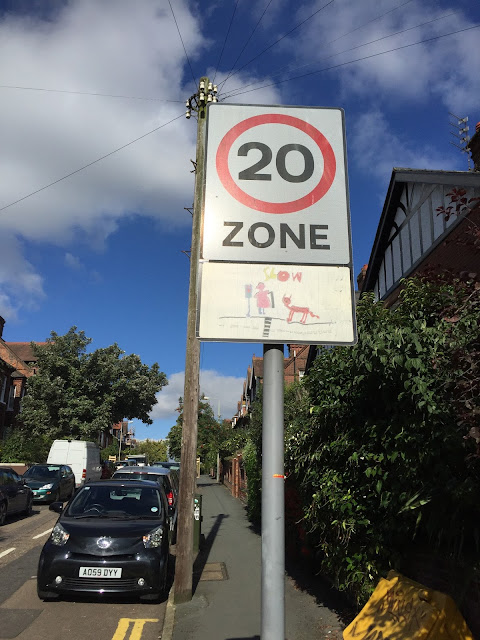 Attractive City Map looks good, but...
I noticed a decent number of Norwich city center maps scattered about. The color scheme is quite attractive:


However for someone less familiar with the city, the similarities in colors and shading make the map a bit harder to read. 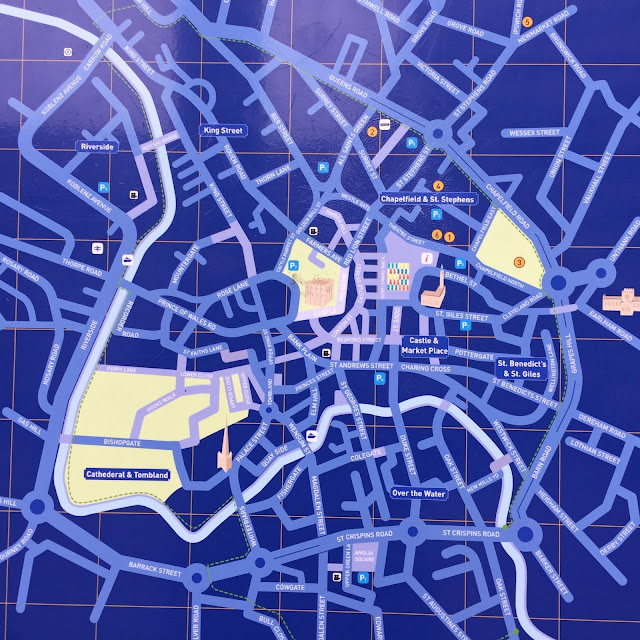 The maps are also not necessarily "north on top" oriented. Rather, the maps are oriented so that when you look at it, in front of you is the same as the top of the map. I'm on the fence about these orientation varying maps. I personally get confused a bit, but that may only be that I'm less practiced at using them. I'd be curious if there have been any studies looking at these type of maps and how they may be more, less or equally effective at wayfinding success compared to traditional north on top maps. 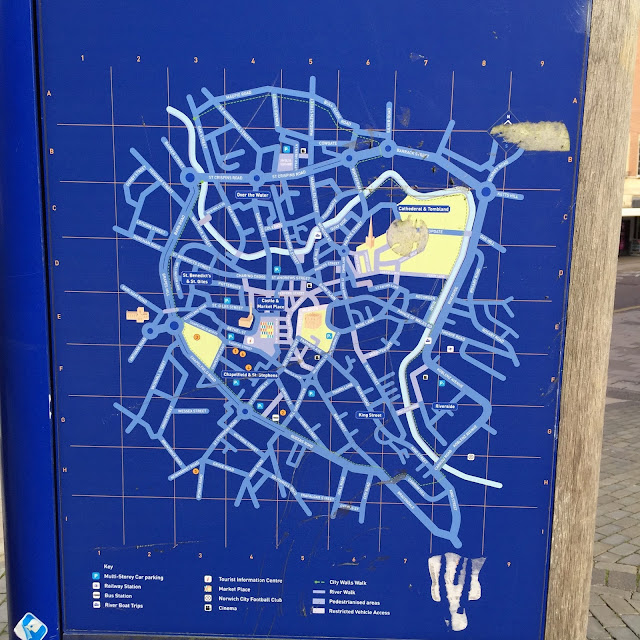 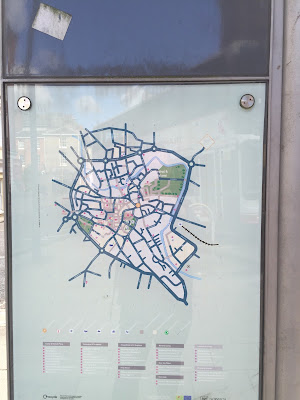 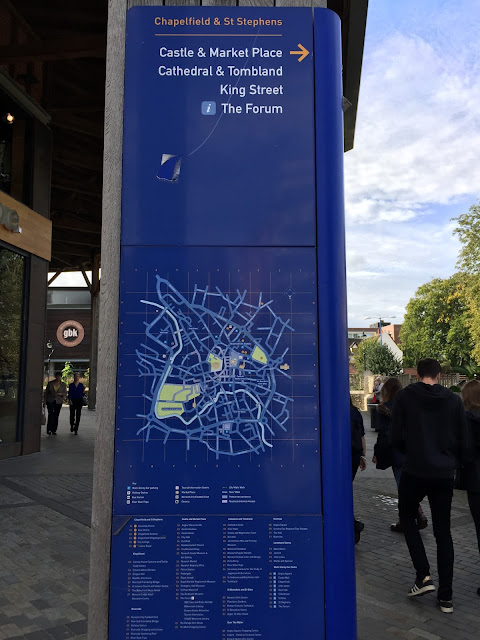 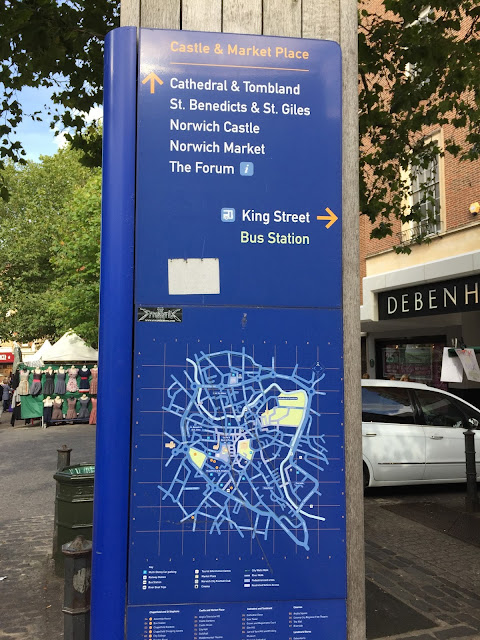