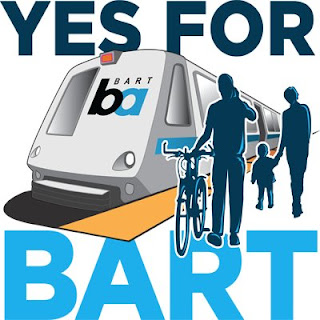 BART was closed between Glen Park and Daly City stations a few weekends ago - one of several planned closures between July and October 2016. You may recall other recent closures in the East Bay, and most dramatically, the pair of Transbay Tube closures in 2015.


Measure RR, calls for a bond that will help finance many of BART's pressing needs for getting you to where you want to go reliably. Sure you might have a bad view of BART now - but think of how much worse it will be if we don't pass this bond. With no bond, we would have the same hardware of old wires, pipes, electrical systems from the 1970s, and no train control system to get more trains through the tube.

In addition Measure RR will have some funding to put towards planning our long term future - including a 2nd Transbay Crossing, which we so desperately need to reduce crowding, improve service, have a backup after a quake, and increase the places we can go via transit and not use sea level rise inducing cars.

To ensure you take a look at this quick note, I've include this map of BART's and the region's intercity rail system over time to present 2016 and beyond to a second Transbay crossing. We've come a long way - let's keep moving. Enjoy.