The Oakland Athletics are considering building a new stadium in Oakland. Where it will go depends on how it is financed and how folks will get to the stadium. Let's look at access.

Sporting events are big events that draw people from an entire region. That means a new A's stadium needs to provide access for folks from Oakland, Concord, Fremont, Richmond, Livermore, Vallejo, and even San Francisco and San Jose. There are two primary ways folks get to a sport stadium: by car or by transit. Cars need parking within a short-ish walking distance, and transit needs to be a short-ish walking distance as well, but can be a bit farther - hey you're going to a great game, it's worth a nice walk.
Let's look at how several of the ballpark sites rate on access. Today we'll look at auto access.

Sites
Parking requires either lots or fields surrounding or close to a stadium, or a series of parking garages. We'll look at both what is available today, but also what would be available in the longer term, especially considering the team will likely finance their stadium in part through developing the area surrounding the stadium.

If we figure the stadium will take up about 9 acres, that leaves little room for development AND parking lots on the site itself for Laney College, Estuary Park, and Brooklyn Basin. That said, areas surrounding both Laney and Estuary could easily have parking structures added to them, especially the Laney College parking lot west of the ballpark site.

However, from a purely parking lot perspective, it's Howard Terminal and Coliseum that provide ample parking and development opportunity from an acreage point of view.

Freeway Access
The key way to get to a stadium by car for most people is by freeway. You also need to get from the freeway to the stadium via off and on ramps plus a few streets. The key piece is the freeway on/off-ramps. Let's look at how many freeway on and off ramp sets are at each site.

We'll count one ramp set as two off-ramps, one in each direction, plus two on-ramps in each direction. We'll only count ramp sets that are relatively close to the stadium site and have street access.

The Coliseum has two full ramp sets, one at Hegenberger, the other at 66th Ave. I-580 is beyond the 2-mile radius of the stadium. The ramps and surrounding streets are designed for the high volumes of major sporting and concert events. 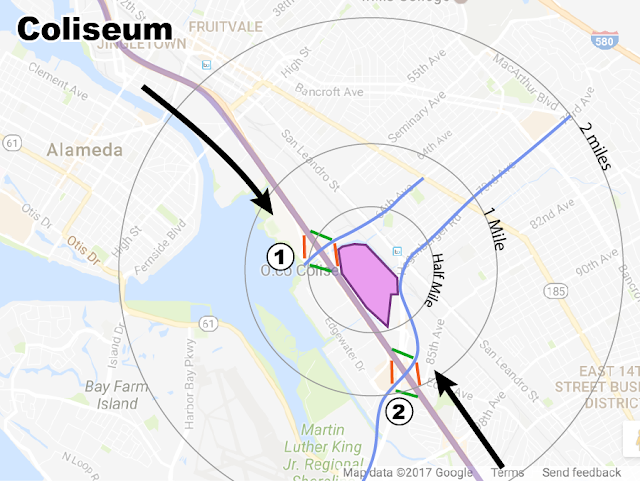 Brooklyn Basin is limited with its shoreline site. However, I-580 get's within the 2-mile radius of the stadium using Park Blvd and 5th Ave to access the park. Unfortunately there are few freeway ramps close to the stadium (unlike Coliseum), and some are not designed for high volume traffic, and may not be up to current interstate standards. 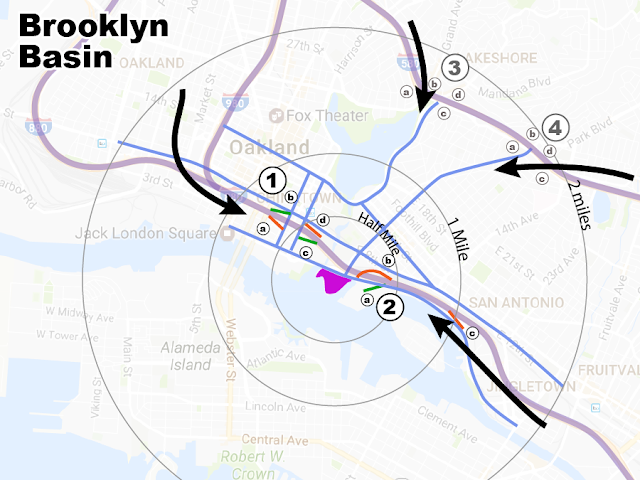 Estuary Park is similarly limited but it is located closer to the Oak and Jackson St ramps which can handle more traffic due to accessing these wider streets. Some adaptation to street in Jack London, south of I-880 would be necessary, and not necessarily favored by residents in the area. Interestingly the Park Blvd exit is just beyond the 2 mile radius. However, nearby freeway access is better than Brooklyn Basin. 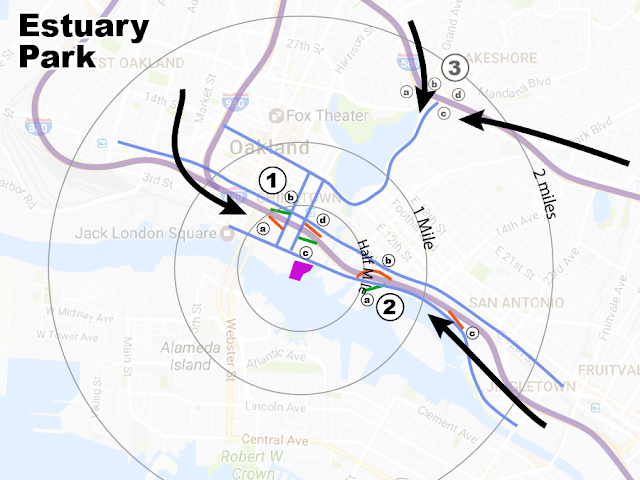 Lane College Fields only have 1.5 ramp sets nearby but 3.5 if you count the I-580 access. The Jackson and Oak ramps, plus Broadway (not shown) provides access to and from the north and south. Similar to Brooklyn Basin and Estuary, street access from the south and east would come from Park Blvd and 5th Ave. Access from the west and north would come from 7th St. 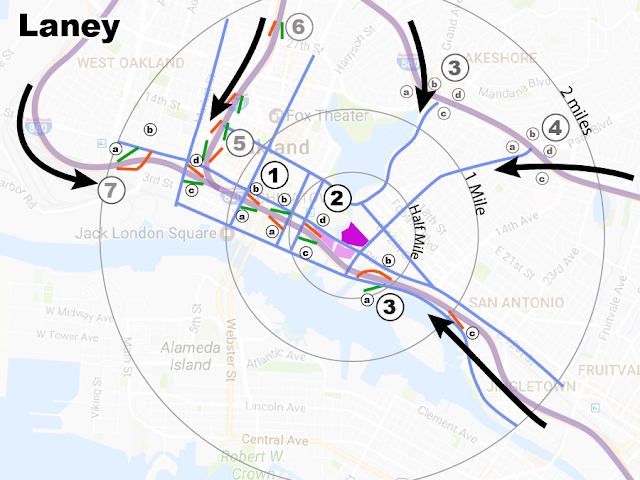 Howard Terminal has the best current freeway access with ramp sets from I-880/I-80 to points north and west. I-980/24 provides access to points north and northeast. Finally I-880 south offers access to points south and southeast. The streets in the area are sufficiently sized, especially Market Street for event parking traffic. The main challenge with the site is the railroad along Embarcadero West, which would cause headaches if trains passed through while large volumes of cars arrived or left the site.

A possible solution to the rail conflict would be to underground the railroad tracks (which would help reduce pedestrian danger of getting hit by a train), and/or raise the elevation of Howard Terminal significantly enough that a bridge could go over the tracks at Market Street and Martin Luther King Way for example. 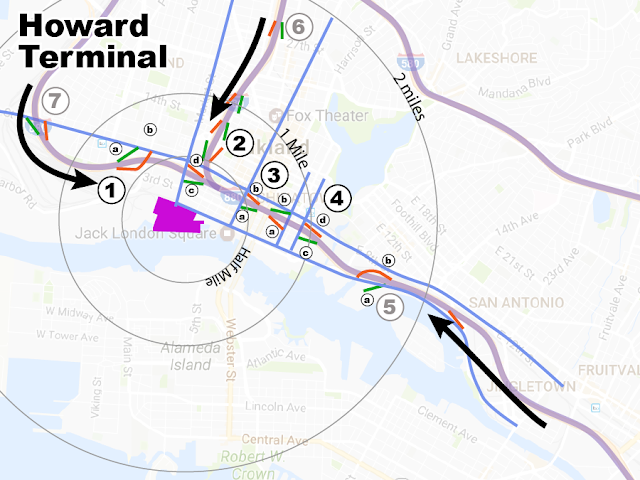 Auto Access Score
When you combine the ramp set values (20 x ramp score), and parking capacity (acreage), you get a basic value. The higher the better. Please note that these numbers are very back of the envelope and have several subjecting elements to them. I'm open to refining the scoring system, but at least this is a start.


Parking Future
When we factor in time, we can use AT&T Park as a model, where vast areas of parking lots surrounded the stadium when it opened. As development filled in the land, people learned to get to the stadium by transit, and some garages opened where new office complexes were built (I'm looking at you UCSF). Oakland could do the same at the Howard Terminal and Coliseum sites.

Unfortunately the opportunity to develop land from parking lots is much more limited at Estuary Park, Laney College and Brooklyn Basin. Estuary has a highly constrained site surround by primarily already developed private land. Brooklyn Basin appears to already be under construction - at least at its larger site. The Laney site is not so large either, but if the college administrative buildings south of the proposed site are combined with the large parking lots to the west, there could be a chance for some development, but would likely have more complicated arrangements or land swaps.

In the end it appears that from a parking and an access point of view, the Howard Terminal and Coliseum sites are the best.