With two recent hurricanes coming ashore of mainland United States in Texas and Florida, and the associated flooding, it got me thinking about future sea rise and storm risk areas in the Bay Area and how future train tunnels and stations might be affected if we were to have a big storm combined with sea level rise.

Firstly, to be clear, my intentions are to be proactive, adaptive and work with the world of higher seas that we are now entering. I have not intention to be alarmist - rather prudent under future dramatic circumstances. Let's just say, with sea level rise we must avoid the unmanageable and manage the avoidable. Seeing that we haven't protected any of our shore yet, new train stations should avoid the unmanageable flooding. However, if have managed the avoidable, as in protecting our low lying lands, stations could be placed in lower lying places.

The current Downtown Rail Extension of the Caltrain line calls for a tunnel from Mission Bay to the Trainforce Transit Center (aka Transbay Transit Center) at Mission and First streets, through areas at 5 or fewer feet above current sea level.

I know that train tunnels go through zones full of groundwater. These tunnels are build to minimize or prevent groundwater infiltration into the tunnel. Pumps are standard in underground subway systems like San Francisco and New York City. So having a new train tunnel go through a area potentially flooded by sea water may not be such a problem, especially if vents and emergency stairways exit to higher ground or platformed locations. 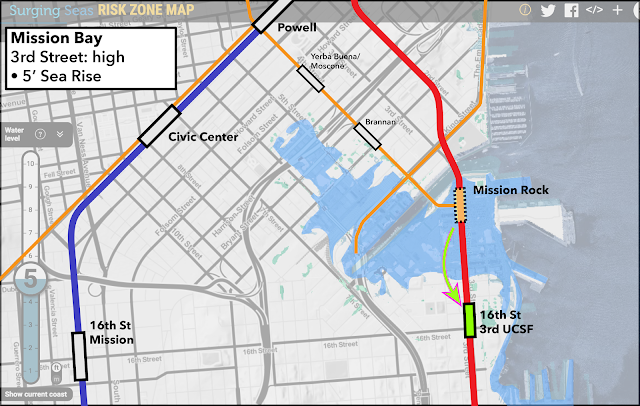 This leads me to my point. Although tunnels may pass through potetially wet zones, why would we build a multi-billion dollar train tunnel with stations and station surface openings where the land is so low and at risk of being inundated in less than 100 years by sea level rise? 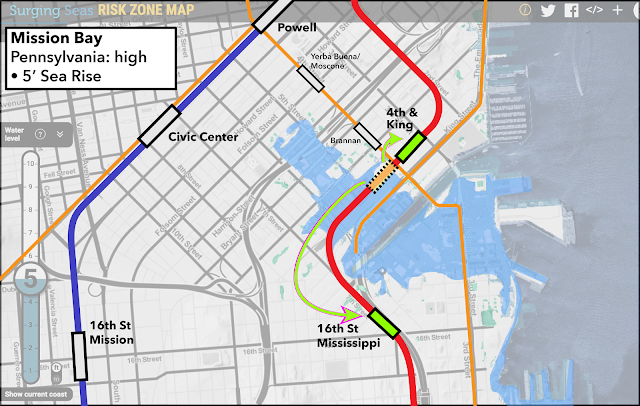 The solution to the problem is to place the stations at higher ground.

By placing stations at higher ground, say above 5 feet, we can ensure that the stations will likely be open and functioning for the 100-150 years that a train tunnel is built for.

In addition, moving the DTX stations to higher ground might create better station locations than current stations, and wouldn't create significant design changes to the tunnel constructions that are currently planned.

Pennsylvania Alignment
DTX project has the following two alignments under serious consideration. Both alignments work well for getting commuters to Mission Bay and on to the Transbay Transit Center (aka Trainforce Terminal). Their main differences are where to place stations and how those locations will be closer or farther from various employment, residential and entertainment concentrations.

The Pennsylvania Option, as planned places its SoMa/Mission Bay station under Townsend between 4th & 5th streets. This area is in the 5 foot sea rise zone. However, moving the station just one block east, between 4th and 3rd streets would be higher ground while still keeping the station as a transfer point to the Muni T-Third line.

Alternatively or in addition, a 16th St Mississippi Station would provide better access to the UCSF Mission Bay and new Warriors Stadium area, not to mention the California College of Arts.

Third Street (Mission Bay) Alignment
The Third Street Option, as planned, places the new SoMa/Mission Bay station under Third Street somewhere near Mission Rock and north of UCSF Mission Bay. This area is great for access to the future Central SoMa developments, Mission Rock and Mission Bay overall. However it is in the 5 foot sea rise zone. Moving the station just a bit south, between 16th St and South St, or Mariposa and 16th St would be higher ground while still keeping the station as a transfer point to the Muni T-Third line. Although farther from Central SoMa, that area would still be accessible by the T-Third. A station between 16th St and Mariposa would be at the front door to the UCSF Mission Bay Medical Center and to the future Warriors Arena (Chase Center), with its added office buildings.

Under current plans of the RAB study, the 22nd St station would be put underground, an expensive proposition. Under my plan, both options would move south, away from the more residential Dogpatch neighborhood, to and above ground Cesar Chavez Station that would provide better access to points west of the rail line, and still be above the 5 foot elevation.

For both the Pennsylvania and Third Street options, having 22nd Street station moved south, but having 16th St stations would still provide good access to the new Pier 70 development, and provide better access to the southern Mission Bay than any of the current plans.