I just saw the classic film "Network" for the first time ever. It's quite surprising (but sometimes not) that a film in 1976 film would predict the state of television today (and since 2000). With the advent of reality television since Survivor came on the scene in 2000, we're pretty much where Network predicted.

On top of it, Network predicted the 1980's move of news departments from being independent to being part of the profit part of the network, necessitating they be more entertaining with all the bells and whistles. I remember as a kid, my dad watched the news religiously. If I asked him a simple question while he watched Walter Cronkite tell us the way it is, he'd respond "SILENCE!" Needless to say, I ended up being a news junky like him. I recall that in the mid-1980's, a few years after Dan Rather had taken over for Walter, that there were all these previews of what was coming next, and intro graphics. At the time I thought, why do we need an intro? we'll be watching after the commercials. Now this was before the time of ubiquitous remote controls, but still it begs the question today: Why do we waste so much time on tv telling people what's coming up next and not just give them the news or even the show for that matter. Of course it would seem that people don't like ads and sometimes turn off the tv or change the station. Well I say, just give the show and give us the program you're making, not promos and 15 minutes of ads. Sure I'm ok with 10 minutes of ads, but not 16. You'll note that the series Star Trek from the late 1960's was about 51 mintues long. Now hour long shows can't even crack 45 minutes!

But I digress. Faye Dunaway is fantastic, neurotic and sexy as hell. Peter Finch is the great soothsayer and pulls it off. Even seeing the "mad as hell and I'm not going to take it anymore" scene after seeing the clip countless times, I still found it potent. Simply put, I think we're at a similar point now. 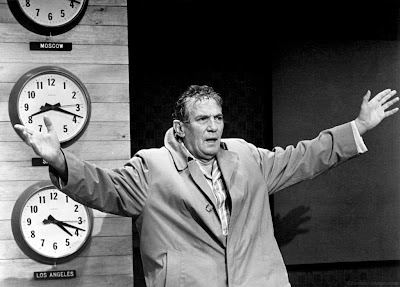