Oh the beauty and wit of Iceland 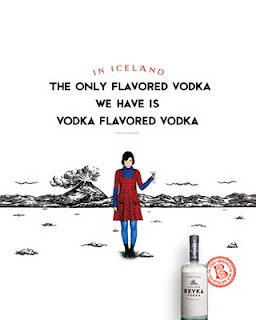 Well worth the visit for the images, humor and cute gal. Makes you want to go out and float on an iceberg in Iceland, or wonder if the women are so attractively deadpan witty and sexy. Haven't tasted the Vodka yet, but did buy a bottle at BevMo tonight. I'll let you know if it was worth it.
UPDATE: Reyka has a new ad campaign so the old videos are no longer on their web site. But you can still check out their web site that is somewhat interesting, but not nearly as funny and inventive.


Reyka Vodka
P.S. More background information:
- In video 1, "hættu þessu" means "stop﻿ this". I wish I could speak penguin like her.
- The actress is Icelandic singer Hafdis Huld who is equally quirky in her singing
- Ads are created/produced by "Dead As We Know It" out of Brooklyn, NY. They've done many other liquor ad campaigns, including Kraken Rum (which is equally funny), and IFC among others.
Email Post
Labels: Hafdis Huld humor Iceland puffin Reyka vodka