Arup has released a report on how the Bay Bridge could be made to carry more people across the bay, namely through setting up a contraflow lane on the lower deck during the AM peak. By removing a lane in the eastbound direction during the AM peak, buses could use that lane to go west, and effectively increase the people moving capacity of the Bay Bridge. This is critically important between now and whenever a second transbay tube is built (hopefully before I die).


The major work would involve creating passover lanes from westbound I-80, I-880, and I-580. The good news is that this could be done with very little expense or construction from I-80 which would just have a gap created just south of the Powell Street underpass in Emeryville. The critical I-880 connection is more complicated and would require a new overpass or tunnel to get to the middle of I-80 at the Toll Plaza.

More exciting images and explanations available on in the presentation of the report. 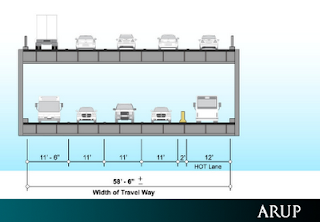