He makes it sound so good!

Some quotes from the video.

"The proposed 1,000 foot transit tower, neighboring the transit center will bring many jobs to the area."

"The grand hall is where passengers will stream up to the buses upstairs and the trains downstairs."

"An exciting feature that has been proposed by Cesar Pelli, is a funicular." Sounds like it won't be built unless Mr. Pelli or another source foots the bill, if I can read between the lines.

"The Transit Center will be surrounded by the densest and most beautiful neighborhood in the Bay Area." I sure hope the plans for the neighborhood with its wide sidewalks and parks come to fruition.

"This project will return the SF Bay Area to a culture of mass transit".
I wonder if that was Peter's adlib at the end. ;) 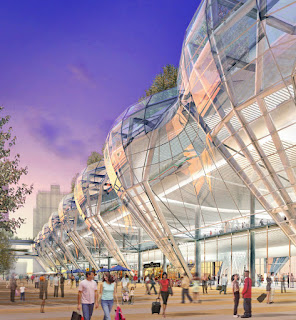