Life at the Speed of Rail

The Van Alen Institute in New York is conducting a competition asking the question, "How will high-speed rail change American life in the coming decades?" They go on to ask, "At this critical moment for American infrastructure, Van Alen Institute calls on the international design community to envision the cultural, environmental and economic impact of a new rail network." 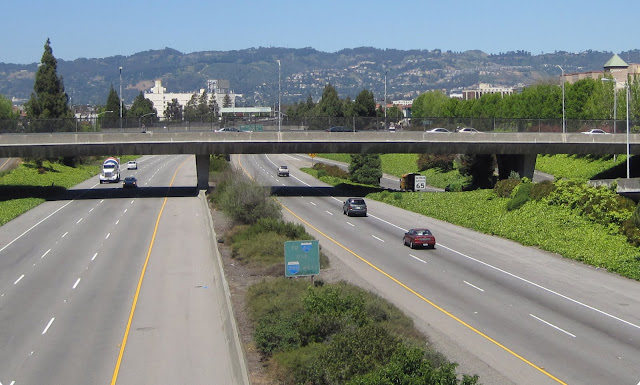 AFTER - WITH rail and possible station - I-980 reduced to 4 lanes. Other half used for rail. 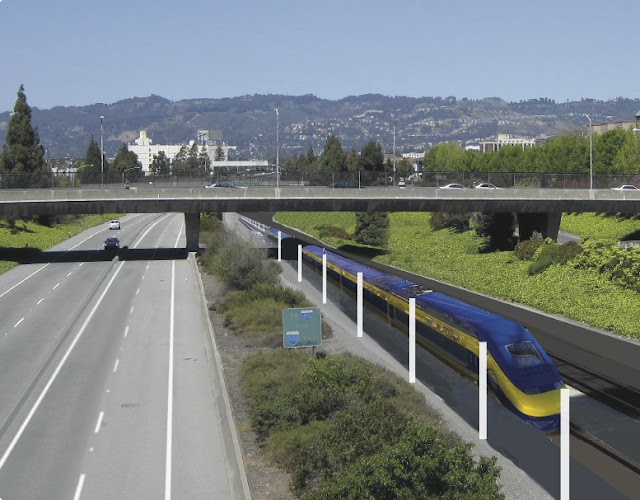 So my good friend Daniel Dunigan and I answered the call and submitted an entry. They asked for either a short video or a poster size image. We opted for the poster. We concentrated on two or three ideas:

1. We must decide now whether or not to build a high speed rail (HSR) network. Deciding not to build it could have more significant negative outcomes than building it.
2. When the system is being built, it will likely built incrementally, not as a complete system as often touted. Building incrementally allows for the cost to be spread out over time. However, for HSR to work well, at least 1/3 or 1/2 of the central segment of the line needs to be built. Building it now while gas prices are not too high (they will get higher) is CRITICAL to MAINTAINING a flexible and healthy ECONOMY for the country and regions with HSR.

Just remember, the highway system and the patchwork of airports was built over decades. HSR can be done the same way as long as critical spine segments are built to ensure feasible routes.

3. Incremental construction will help reduce or spread out costs, but also, we need to think creatively on how to select right-of-ways, build the system, and select station locations. HSR stations are major economic hubs, so the location of them is critical, but also reducing construction costs are critical.
To keep costs down, we have shown how an underutilized freeway can be converted to become both a freeway and a rail right of way as shown in the image. above.

The posterboard entry we submitted is below. 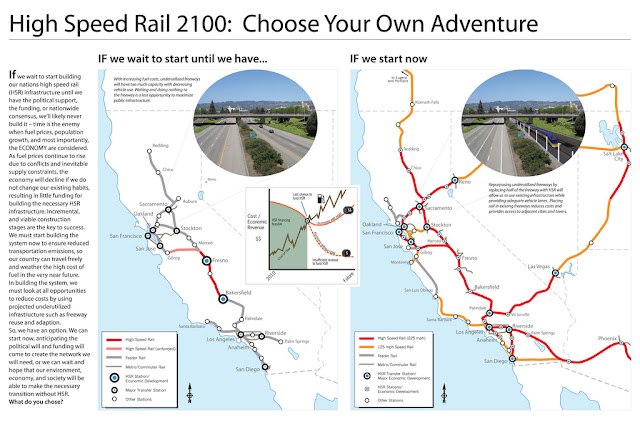