Valencia Street has seen a lot of changes over the past 10 years. Many businesses have come and gone. Over the past 2 years, since the street was redesigned with wider sidewalks and more trees, a wave of new eateries have opened. These include: Pica Pica, Venga Empanadas, Limon (now Limon Rotisserie), Thai House 530, Locanda, Wo Hing General Store, Mission Cheese, Tacolicious, and Grub. In addition, other establishments such as Et Cetera, Mosto, Live Fit, FSC Barber, and the 780 Cafe (former Summit Cafe) have opened. 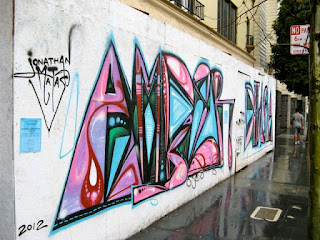 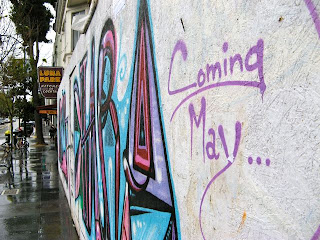 Many many are in the pipeline, but we here at Urban Life Signs wonder if and at what the point of restaurant over-saturation is. One of the soon to be open restaurants is Amber Dhara. While walking the street a few days ago, we noticed someone spray painting on the wooden construction boards surrounding the restaurant. At first we thought it was an ambitious graffiti artist, guerrilla painting his rather attractive word art. Alas, a day later it became clear (after the paint dried) that graffiti spelled "Amber Dhara", promoting the upcoming restaurant with a "Coming in May!" to whet our anticipation.

The Amber Dhara web site indicates that the restaurant is "Coming Soon, May 2012" They are currently hiring (March 28)

The artist is Jonathan Matas, who even signed the piece. His Amber Dhara art is already up as his Facebook banner. He also has two photos of the piece, one for "Amber" and one for "Dhara". With 120 and 111 "likes" at this point, I can only guess that 9 more people think the "Amber" piece is better, or that he has 120 friends - 9 of who couldn't get to clicking "like" for Dhara", or he may have 231 friends. Either way it's looks great, and does his other work, including a piece on The Underground Railroad in Ithica, and a recent painting for Facebook's new digs (see time lapsed video at bottom.)

As reported in SF Gate's Inside Scoop, Vijay Bist, who also owns Amber India in downtown SF, opened an Amber Dhara in Palo Alto last fall as "a new concept." He was reported then to be opening "the same concept in the Mission in the coming months." Well a few months have passed, and we're still under a year so he has a few more months to play with. The place will apparently be a bar/tapas/small plate restaurant. "Chef Vittal Shetty’s contemporary menu centers around vegetarian and non-vegetarian thalis." We look forward to the opening of the restaurant's opening. Based on previous "opening in <insert date>" we'd put my money on it opening in June or July. 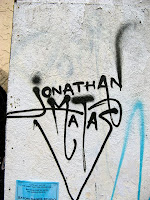 As commented in Mission Mission, "It seems like this place has been boarded up for years, because it has," it made us wonder when it was last occupied. To our incomplete recollection of the past 12 years, the last establishment to occupy 680 Valencia was none other than the "Ralph Nader for President - 2000" campaign offices. Now that's change.