Building high speed rail in America is no simple endeavor. Really it's quite complicated anywhere, but in America, where it doesn't yet really exist (no Acela is not HSR in our book), the resistance to it is tremendous for many American reasons. Accordingly, the first HSR service may end up being located not in the most logical location (SF-LA, or Northeast Corridor), but instead where a combination of boosterism, lack of political backlash, and open land is more readily available. That project may well be the DesertXpress, now named the XpressWest.

Planned as a link between Las Vegas and Southern California, the original plan has been to run the high speed tracks from Las Vegas to Victorville, a Mojave Desert city north of San Bernardino along I-15. The hope was Angelinos would drive to Victorville, hop on a train and get to Las Vegas much more quickly than driving, but leave their car in a large desert parking lot during the Vegas excursion. Understandably, many doubted this project due to the parking requirement. Effectively, there was a gap between Victorville and the LA Basin that would dissuade most from using the train.

Luckily, the project looks to have found a solution to the gap problem. Per the Victorville Daily Press, the "$6.9 billion DesertXpress train from Las Vegas to Victorville have entered into talks with the Los Angeles County Metropolitan Transportation Authority to explore a Victorville-to-Palmdale extension." In other words, high speed tracks would not end in Victorville, but in Palmdale, which happens to be one of the stops in the California High Speed Rail System." Suddenly project could have a one seat ride from LA to Vegas, or at least a ride from LA to Vegas with a transfer in Palmdale. 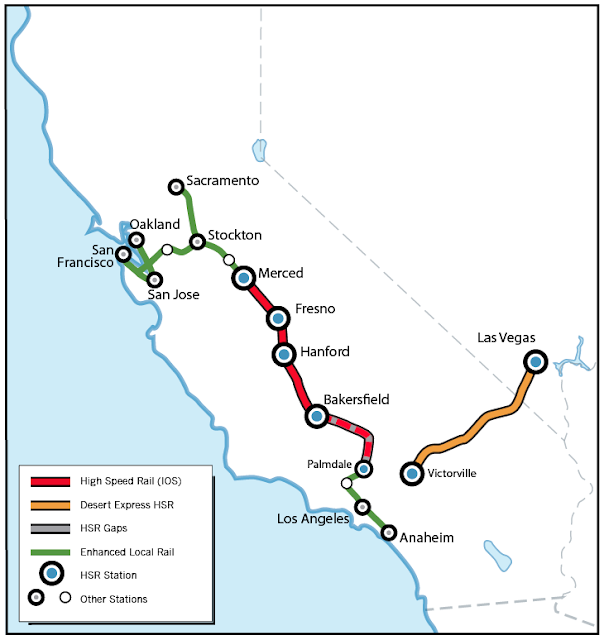 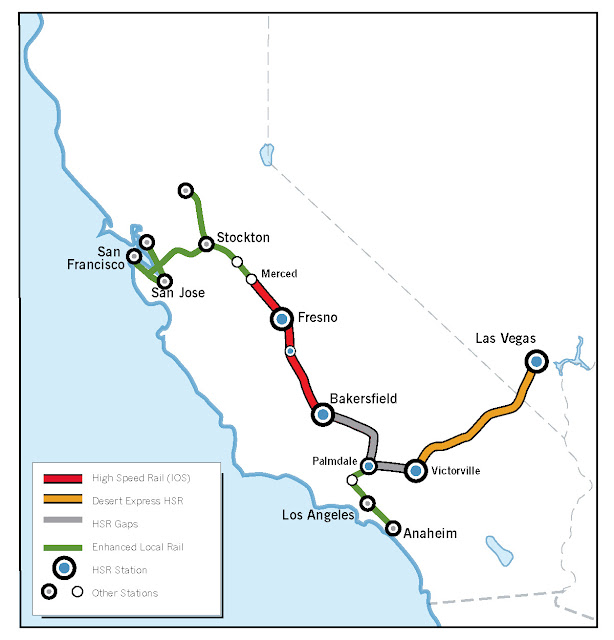 Regardless of whether the Xpress West or the first stretch of California High Speed Rail is built, the connection of the two systems is critical to developing a true high speed rail system and network, not just within California, but throughout different states. It also shows that a public-private partnership on such an expensive capital system can be developed and executed.
The questions remaining are: