Two weeks ago the city was aglow with the Worlds Series victory of the San Francisco Giants. Just like in 2010, BART's single day ridership record was broken by fans and supporters getting to the victory parade. The 2010 record of 522,000 riders was broken with a 46,000 bump to 568,000 daily riders on October 31, 2012 - a 9% increase. Without BART, thousands of fans would have been left high and dry, either sitting in cars in traffic, or staying at home watching the parade on TV rather than enjoying the thrill of seeing their champions in person.

As the pie chart shows below, 41% of record day ridership is due to Bay Bridge Closures, when the only direct way between the East Bay and San Francisco is via BART. More importantly, note that 32% of records are due to EMERGENCY Bay Bridge Closures, and only 9% due to planned closures (i.e. 78% of high ridership days due to bridge closures are from emergency closures when people have little or not time to plan). 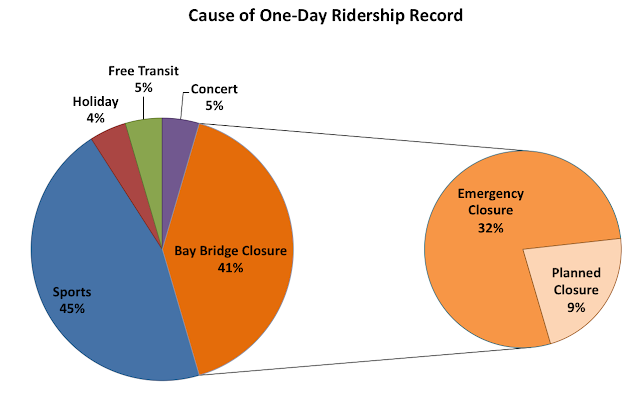 In light of Superstorm Sandy and the havoc it wreaked on New York and New Jersey transit and trains, it is critical that BART continue to operate through the Transbay Tube as a lifeline link and operate in case of future emergencies that close the Bay Bridge. Without BART and the Tube under San Francisco Bay, the Bay Area transportation system, would grind to a halt during major emergencies.

Seeing how BART is so critical, it is equally critical that the Bay Bridge have contingencies set up in the event that BART were to have an emergency and halt operations. AC Transit, Caltrans, MTC and the Bay Area Toll Authority should have a contingency plan set up in the event that the BART Transbay Tube is shut down - one for a shut down of more than several hours, and one for a longer term shut down of several days or even weeks in the event of an earthquake. Possible solutions include only allowing carpool vehicles (as NY & NJ have done), and creating a bus contraflow lane.

SPUR put together a report "After the Disaster", part of its Resilient City series, on how the Bay Area would rebuild its transportation network, and adapt during periods when the Bay Bridge or Transbay Tube were closed. The report calls for many contingencies and plans for special services to ensure people can cross the bay following a major disaster and allow people to get to work in the weeks and months while transportation systems are repaired or replaced.

Eric Fischer has pointed out that only in 2000, and since 2007 have BARTs average daily ridership rates outperformed the original estimates made back in the 1960s. At a glance, it appears that initial planners grossly overestimated BART's initial ridership when it started in the 1970s. We don't know how they came up with these estimates, but they could be due to overenthusiastic optimism, or enthusiastically high numbers to justify such a large and expensive project. In the end though, BART ridership has outperformed the original estimates in terms of the rate of new riders each year.