The high mountains and steep hills get all of the attention. What about the shorter hills with history and character? What about the strategic hills that historically protected the bay with cannons 100 feet above the bay. In the latest installment of Forgotten Hills, we look at Black Point at Fort Mason.


UPDATE: Find about about other Forgotten Hills. Hunters Point Hill, and La Portezuela

The hill in question rises as a bluff above Black Point looking over San Francisco Bay at the northern edge of Fort Mason. Lying to the west of Aquatic Park, and east of Marina Green, the hill rises 111 feet above what is possibly the last original and untouched San Francisco coastline on the bay. Despite having modest defenses installed during Spanish times when it was called Point San Jose, or later during the American Civil War when batteries of cannons were installed at the Post at Point San Jose, the hill does not seem to have an official name.
As shown in the map above, the hill at Fort Mason may even be the northernmost peak on mainland San Francisco. Although the ridge leading to Fort Point is higher, it doesn't have an outright peak that is further north than the Fort Mason Hill. Of course Alcatraz's high point and Goat Hill on Yerba Buena Island are further north but on islands.

Is the hill simply Black Point? Black Point is the name of the land formation protruding into San Francisco Bay, much like Fort Point, or Point Lobos – not the hill itself. Or do we call the hill the more mundane Fort Mason Hill? What about Fort Mason Bluff? For our purposes, we'll just call this 111 foot forgotten hill Black Point.

Height: 111 feet
Ridge/Hill Group: Nob/Russian Hills
Prominence: 23 feet (but 111 feet from north, east and west)
Confusion: Lacks a specific name. The point into the bay is not technically the hill.
Where: Fort Mason in the Golden Gate National Recreation Area at the Black Point Battery
Cross Streets: just north of the intersection of Franklin St and Funston St
﻿﻿﻿

History
Prior to European settlement, the Yelamu Ohlone lived seasonally at this peninsula on San Francisco Bay. After Spanish settlement of San Francisco, the Spanish installed a secondary defense (to support the Presidio's primary defense) at Punta Medanos, or "Point Sand Dune". Thus began the Bateria San José – the future Fort Mason.

The name Black Point comes from the dark laurel brush on the east side of the bluff, facing modern day Aquatic Park. As shown in the illustration below, the point is one of four promontories that originally jutted north into San Francisco Bay. From east to west (background to foreground in the image) Fort Point marked the entrance to the bay at the Strait of Golden Gate. Black Point was the second line of defense, whose battery complimented Alacatraz's battery. Russian Hill dropped steeply into the bay, and Telegraph Hill (originally Signal Hill) was the final hill on the bay before the turn to Yerba Buena Cove where the city started.

The high point of the hill is actually where the last battery was built at Fort Mason. The Cultural Landscape Report for Fort Mason notes that the Endicott system batteries were the forts lasts gun emplacements,

"By 1899, only after improvements to higher priority gun positions were well advanced around the bay, was work initiated at Fort Mason on Battery Burnham, located above and to the rear of the earlier earthen Civil War batteries. Atop Battery Burnham was a single 8-inch breech-loading rifle, mounted on a disappearing carriage designed to rotate below the concrete parapet for protection and convenient loading. The battery was armed and operational by early 1900. The construction of Battery Burnham at the topographic summit of Point San Jose required the relocation of the post flagpole from its prominent spot there to a location just to the rear of the new battery at the head of Sheridan Street. Battery Burnham constituted the third system of coastal fortification built at Point San Jose since 1797, when the Spanish fashioned Bateria Yerba Buena out of bundled sticks and piled sand." (Page 59)

After the 1906 earthquake, much of the fort was used for displaced San Franciscans. In the rebuilding of the city, most of the activity at Fort Mason transferred to its lower area, on the northwest shore where the Fort Mason Center is now located. Several new wharves and warehouses were built here and used heavily during WWI, WWII and the Korean War as the Port of Embarkation for war personnel and supplies. The fort was transferred to the National Park Service in 1972. Since 1906, Upper Fort Mason, its hilltop and the Burnham Battery have been largely unmodified. 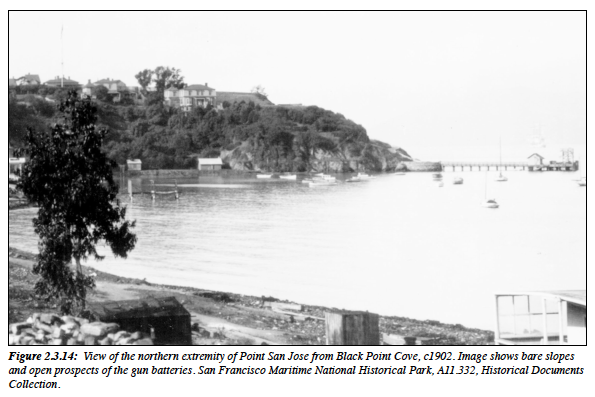 Height
Regarding height, the only referenced "official" height is 111 feet from Geocashing.com. A benchmark is placed on the top of the Burnham Battery by the National Geodetic Survey.

Views and Prominence
As mentioned in the Hunters Point Hill post, there are few hills at this low height. Only Rincon Hill (105'), Alice Griffith Hill (75') and Irish Hill (50') are shorter, with Hunters Point Hill rising higher to 125 feet.

What makes these hills noteworthy is their proximity to the bay, especially Black Point with its steep bluff overlooking the bay. As you can see in some of the photos, the hill does not stand out as dramatically as others. However views from the top of the hill show the steepness of the hill and the dramatic views of Alcatraz Island and overlooking the bay.


Thank you to Amy Hoke and Craig Scott at Fort Mason for their help in researching the history and height of Black Point. If you're interested in finding a more comprehensive list of San Francisco's hills I suggest going to SF Gazetteer, or to 47hills.com. SF Gazetteer is true to its word when it states "The most complete and accurate list of San Francisco hills." Incidentally, both Black Point and Hunters Point Hill are not on the SF Gazetteer's "How Many Hills are there in San Francisco?" list. That said, I am in a huge debt to all the work that SF Gazetteer did to compile its list of over 70 hills and the research on each of them. 47 Hills has a shorter list but many more photographs of the hills, or the view from them.
Email Post
Labels: Aquatic Park army base battery Black Point bluff Burnham Battery elevation forgotten hills Fort Mason hills peak Point San Jose San Francisco San Francisco Bay San Francisco history