I've always wondered why cities of the future always look so great, yet somehow unbelievable. Whether it's in a science fiction film, or an architect's vision of a city, cities of the future often look too good to be true. But some cities actually look futuristic. Dubai's skyline is full of fanciful looking buildings for example, but when you get onto the ground, it's not nearly as lively as you might like (or so I've heard).

Two cities actually almost have it all. Vancouver and Hong Kong, have very modern skylines. They've even got amazingly huge mountains as their backdrop, big harbors, and lively street life. In the previous Great Harbor Matchup, we looked at the two "Golden" cities, San Francisco and Istanbul. In this installment we take a look at two "futuristic"mountain harbor" cities: Vancouver and Hong Kong.

Vancouver was actually used as the template for the fictitious Caprica City in the television shows Battlestar Galactica, and Caprica. The image below even shows mountains in the background. Vancouver was even used as a city template for a Franklin Templeton investment bank tv commercial showing a fictitious city with the great skyscrapers of the world.
I'm not familiar with any films using Hong Kong as a fictitious future city. However, with it's unique skyline, mountain backdrops, varied architecture and amazing light shows, it already looks like a city of the future.
Vancouver and Hong Kong were also selected as a matchup for their cultural/economic connection to each other, not to mention being former colonies of the British Empire.

One overarching element that makes the cities different is their size. As we will see, Hong Kong is a very large city that is incredibly dense, while Vancouver is a medium large city with a dense downtown.

Although the two harbors both have large mountains looming over them, they have few other significant similarities. 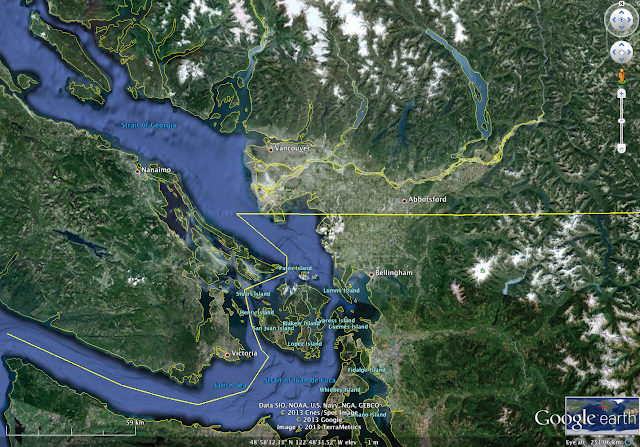 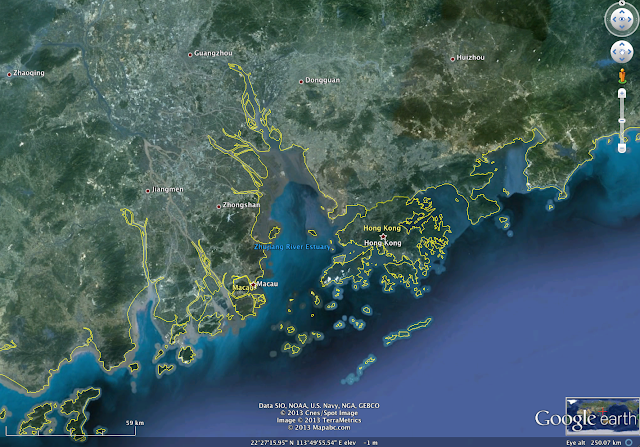 As you can see in the maps below, Hong Kong's 7 million residents are packed into narrow bands of urbanity. Meanwhile, Vancouver is more spread out like most North American cities. It's density is only in its Downtown peninsula area and in high rise districts surrounding its rail stations. The two maps below are at the same scale. 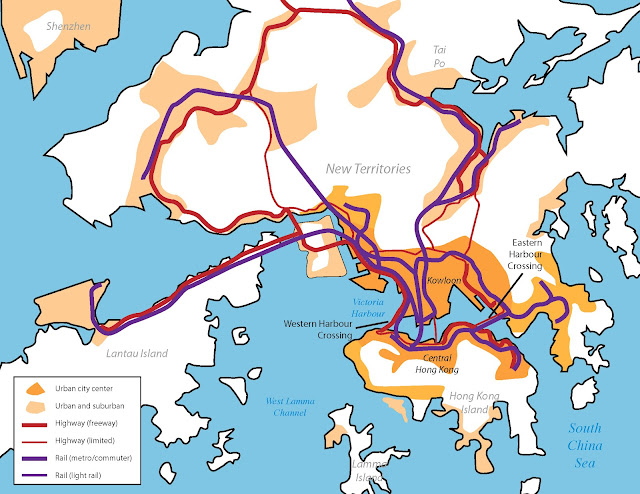 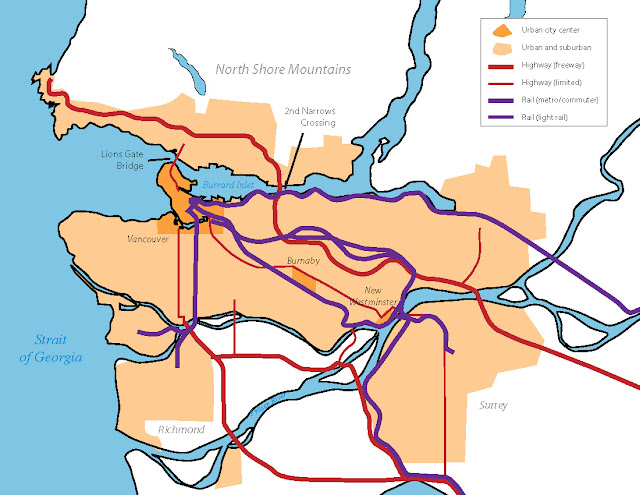 
Note that Victoria Harbor is accessible to ships from the east and west. The harbor, unlike most river or bay oriented harbors can be reached from the sea in two directions. Think of it as having two entrances, while most harbors only have one entrance. The Hong Kong region is very close to other major ports and urban centers, all part of the Pearl River Delta region.


History and City Comparison
Vancouver (founded 1886), and Hong Kong (1842 as Victoria City) are both relatively young cities. Fast forward to 1984, when the two cities started to get a bit closer. That year, the People's Republic of China and the United Kingdom signed the Sino-British Joint Declaration, which arranged the transfer of Hong Kong from British to Chinese sovereignty. The agreement guaranteed Hong Kong's status as a "special administrative region" that would retain its laws and autonomy for 50 years after the transfer. That means that in 2047, the "one country, two systems" model of China will end, with Hong Kong being incorporated into the Chinese Communist system of government.


Many Hong Kong citizens felt uncertain about the prospect of living under the Chinese government, in spite of assurances Hong Kong would maintain its democratic government and rights. Thus began the brain drain of Hong Kong. After the Tianamen Square massacre of 1989, many Hong Kongers took advantage of British allowances for moving to Commonwealth countries, including Canada.
Thus began a major influx of Hong Kongers and Hong Kong money into Vancouver. Many Vancouverites began calling their city Hongcouver. Many homes were bought by Hong Kong families, then torn down and made into modern homes, enraging local Vancouverites. The pejorative term "monster houses" was used to describe the new homes. Although many families moved to Vancouver, many workers commuted from Vancouver to their jobs in Hong Kong. This situation brought about the term "astronauts".

Luckily, in the 15 years since Hong Kong transfer to China, Vancouver has become accustomed to its growing Chinese population. In fact, the demographic shift has made Vancouver a more cosmopolitan city. "We are now the most integrated Asian city in North America," says Henry Yu, a professor at University of British Columbia. In an article for the Vancouver Sun, Yu notes,"In a lot of cities Chinese are in certain areas only. But in Vancouver, you can't go to a neighbourhood now where Chinese aren't living in significant numbers. It's incredible."

Before the 1990s, both cities had much less dramatic skylines.

Hong Kong:
In 2010, Hong Kong's population was 7.07 million, with a 6,480/km2 density overall. Note however that much of Hong Kong's land mass is uninhabited due to mountains and steep slopes. So if we look at the three major areas of Hong Kong, we get a better sense of how the city is made up.

Hong Kong has one of the largest ferry system in the world, with the famous Star Ferry alone carries 26 million passengers a year.

British Columbia's BC Ferries has a massive ferry system to reach Vancouver Island and other points throughout the Strait of Georgia. BC Ferries carries 20.2 million people annually (and 7.8 million vehicles). Although the system is significant, it is primarily an inter regional ferry system rather than an urban ferry system like in Hong Kong, Istanbul or Sydney. Vancouver's urban ferries include the SeaBus linking Downtown to North Vancouver, and several water taxis serving Downtown, False Creek and Granville Island.

Vancouver has a British style coat of arms with a ship on top signifying its seaport, two men on each side; a logger and fisherman. The former Hong Kong's British Coat of Arms is no longer used. However, note that the coat of arms has two Chinese junks, while the lion and the dragon represent British and Chinese aspects of Hong Kong. Since the handover to China in 1997, Hong Kong has a regional emblem.

In conclusion, Vancouver and Hong Kong are both amazing harbors with dramatic skylines and mountains. Although they are significantly different in terms of population and economic heft, they are both globally oriented cities that have moved beyond their British roots.  Hong Kong may take the cake for pizazz with its stunning skyline, economic power, and its unique history. However, Vancouver has one of the most liveable cities in the world, and has one of the densest skylines in North America.