The sexy part of redevelopment proposals are their hope, promise of sunnier prosperous days, and optimism for a better city. Relocating the orginal tenants or companies, even a railyard, is the challenge, and much less sexy to talk about. Continuing our analysis of the Caltrain Railyard Development Proposal, we look at where the 4th & King Railyard could or should go.
When the Mayor's Office suggested "Let's be San Francisco and Take Down the Freeway", they provocatively, yet compellingly, proposed tearing down I-280 north of 16th Street and converting the 30 acre Fourth and King railyard into a high density mixed-use neighborhood. Also mentioned, but less emphasized were proposed new more efficient Downtown Extension (DTX) tunnel realignments. What was missing was a study of where to relocate the railyards.
Avoiding the sticky issue of where to relocate the railyard is understandable. When proposing a new idea, especially one as striking and compelling as removing the freeway and yard to reconnect neighborhoods, deciding where the railyard will go distracts from the benefits of the proposal. That said, determining a railyard site is critical, and must be included in the analysis of whether or not to tear down the freeway or to build housing and other development on the 4th & King Railyard site.

If the railyards were relocated, there are a few locations that might work, but two issues are critical to a railyard:
The challenge is fitting such a railyard in an already urban area: San Francisco. One important note: I have no direct engineering experience regarding rail design regarding railyards, but I do understand the basic needs as mentioned above for a maintenance facility and a railyard where trains can layover when not in use.

I took a quick scan of several high speed rail equipment and maintenance facilities the UK, USA, and France. Due to the geometries of rail lines, a railyard is often NOT shaped like the rectangle shaped 4th & King Railyard. Most are actually shoehorned alongside existing rail right of ways, and have more of a diamond shape if trains enter and exit at both ends (see first image below), or more like a triangle if the yard dead ends and only has one entrance/exit (see second image below). 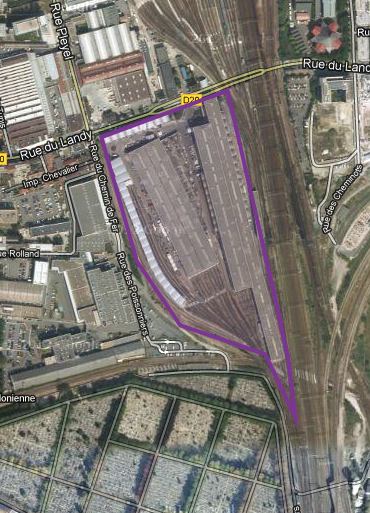 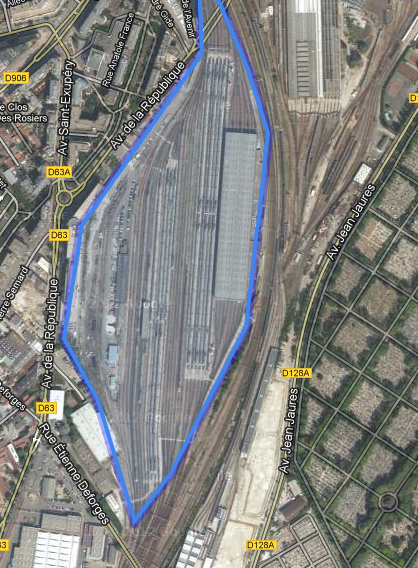 So where to place the Caltrain yard, High Speed Rail yard, or both. Should it be a triangle shape, or diamond shape or both?

The options that would allow for redeveloping the current yard and reconnecting the neighborhoods are: 4th & King Railyard, Central Waterfront, Bayview, and Brisbane.

SoMa/4th & King at grade (basically existing)
Keep the railyard at grade. Designate tracks for Caltrain storage and HSR storage. Maintenance Facility would also be located here.
Opportunity: Close to terminal station (Transbay Center) 1.4 miles. Land is already owned and can be easily reconfigured for new facilities. Affordable.
Challenge: Opportunity to knit neighborhoods together is lost. Revenue from development potential is never gained. In addition, an above grade elevated decked development is infeasible.

SoMa/4th & King Underground Yard
Build the railyard in a trench, below grade. Build a deck over the yard and facility at grade. Build development on deck. The idea has been successfully built, most famously at Grand Central Terminal in New York City.
Opportunity: close to terminal station (Transbay Center) 1.4 miles. Allows for at-grade development.
Challenge: Very expensive. Development above may not generate sufficient funds to pay for trench yard and decking.
Central Waterfront/Woods Yard
At the 22nd Street station, the tracks are at grade and could have a spur track go to a facility where the current Muni Woods Division diesel bus yard. The site would likely be between 22nd St and 24th St and would likely require removing Iowa Street between 22nd and 24th Streets.

Opportunity: 2.4 miles away, which is still relatively close. The bus yard is owned by the city so it could be transferred more easily. However a new bus yard site would need to be found. The new Caltrain facility (CEMOF) in San Jose measures about 0.25 miles long and 275 feet wide. This would fit into most of the Woods location, i.e. sufficiently large to accommodate Caltrain.

Challenge: Only big enough for a Caltrain facility, not enough room for a high speed rail maintenance facility.  The CAHSR facility would have to be located elsewhere due to needing more land for its longer train sets. Some land taking may be required south of 23rd Street. Due to the hill and the partially trench of the current tracks, some excavation may be require for a yard.
Central Waterfront/Pier 80
A Track or two would lead to Pier 80 on a viaduct (or a trench?). The railyard would use the open land at Pier 80 site, which is sufficiently large for an HSR and possibly also a Caltrain railyard.

Opportunity: 3.6 miles away, which is not too far. The pier is owned by the Port of San Francisco (effectively the city) so it could be transferred more easily. The site is very large adequate land is available. If there is sufficient land, HSR/Caltrain could have some light freight transfers to shipping.

Challenge: The site is not immediately adjacent to the to the Caltrain tracks. A viaduct spur route would be required to access Pier 80, including crossing Third Street. The current value and use of Pier 80 is unknown to me, so I don't know if it still requires the large asphalt area beside it. IF the pier asphalt area is underutilized there would be less of a problem and the pier could still be used for shipping. If a railyard required removal of the port facilities, one of the last San Francisco container facilities would be removed.

(Does the America's Cup have any dibs on any of Pier 80's facilities?)
Bayview/Evans Ave
Alongside the existing railway, a spur rail would bear north near Jerrold Ave to a rail yard and maintenance facility that would go as far north as Davidson Ave. Due to the importance of Evans Ave, it would remain but cross the rail facility as an elevated viaduct.

Opportunity: 3.6 miles away, this facility requires no spur rail connection to reach the main line. In addition, it is ideally shaped in a triangle. Also, the site may be sufficiently large for both Caltrain and HSR train sets.

Challenge: The site would require some taking of property. It is also adjacent to a City water treatment facility. Some of the buildings on the site outlined may be city water buildings.
Bayview/Newcomb Ave

Opportunity: 3.6 miles away, the site would be alongside the tracks just like the Evans Ave alternative, providing easy access for trains.

Challenge: Caltrain/CAHSR would need to purchase the property. Alternate locations for the businesses are not clear. More of the site is divided up by puplic streets than the Evans Ave alternative.
Bayview/Cargo Way

A Track or two would lead to the Cargo Way site, near Piers 90-96 on a viaduct. The railyard would use the "Pier 90-94 Backlands" open land beside Cargo Way, which is sufficiently large for an HSR and possibly also a Caltrain railyard. The current uses would be relocated and compensated for displacement.

Opportunity: 4.3 miles away, the site is farther than preferred, but operable. The area is likely owned by the Port of San Francisco (effectively the city) so it could be transferred more easily. The site is very large adequate land is available. If there is sufficient land, HSR/Caltrain could have some light freight transfers to shipping. The Port seems to want to put this land to other use than its current use - why not a rail yard?

Challenge: The site is not immediately adjacent to the to the Caltrain tracks. A viaduct spur route would be required to access the site, including an overcrossing at Third Street. The current value and use of the Cargo Way area is unknown to me, so I don't know if it still requires the large gravel and soil site. Port and shipping operations would still remain.

A larger version of Evans Ave and Newcomb Ave facilities. The facility would lie in both San Francisco and Brisbane (in San Mateo County)

Opportunity: 6 miles away, the site would be alongside the tracks just like the Evans Ave alternative, providing easy access for trains. The site could be the largest railyard proposal listed here.

Challenge: At 6 miles distance, the deadhead "out of service" trains would reduce capacity and productivity.  Caltrain/CAHSR would need to purchase the property. In addition, at 6 miles distance, trains would operate on long deadheads when they go to the facility. However, the City of Brisbane does not want a railyard built here, so this might kill the alternative.
In summary, a study of these sites and others needs to be conducted to determine the viability of all these sites for a Caltrain and a high speed rail yard and maintenance facility. That includes studying the current 4th & King site to see if it is sufficient.

For comparison, here are the distances of maintenance facilities and yards from some other major train stations with high speed rail and other commuter rail services:

Based on the limited information, I would say that using the Bayview Evans or Bayview Newcomb sites, in tandem with a Woods Division site would be the most amenable. In addition the Cargo Way site seems attractive since the Port of San Francisco is looking for a tenant. All that needs to happen now is for San Francisco, Caltrain and California HSR Authority to call their real estate brokers and bankers.

As an addendum, here's the section of the Transbay Terminal/Caltrain Downtown Extension FEIS that covers the viability of a Brisbane Yard:


2.3.3 CALTRAIN STORAGE YARD LOCATED IN BRISBANE
An alternative to the Fourth and Townsend location proposed for a Caltrain midday storage and
layover yard was a site at the former Bayshore Yard in Brisbane. This potential yard site was
withdrawn from further consideration because of its distance from the proposed new Caltrain
terminal. "Deadhead" time (the amount of time the train would be operated out of revenue
service) would have been at least three and one-half times greater than the time to the current
Caltrain facility, adding substantially to Caltrain operating costs and adversely affecting the
ability to operate efficient and safe train service at anticipated levels of service.
Email Post
Labels: 4th and King Bayview Brisbane California High Speed Rail Caltrain Caltrain railyard Cargo Way CEMOF HSR I-280 maintenance Pier 80 Port of San Francisco San Francisco Schlage