To Be Tall or To Be Prominent...

What makes a hill more famous, more important, or more beautiful? Is it its shape? its height? its history? Maybe we don't notice hills for these reasons. Maybe we really notice them for their prominence. Continuing our look at hills - this time beyond Forgotten Hills, we look at what makes a hill in San Francisco (or anywhere) seem more important, significant or striking.
Prominence is what it sounds like, how much does a hill or mountain predominate the skyline or region. A tall hill next to a slightly taller hill is not that noticeable. However a somewhat low hill that has no hills around it (think Telegraph Hill) is very prominent. An explanation follows, but review the graphics below for a quicker understanding, then read the descriptions.

Mount Diablo is a taller version of this. At 3,864 feet it's not especially high for a mountain. But with so few mountains near it, the mountain's prominence is 3,109 feet. By contrast tall peaks in a range like the Santa Cruz Mountains, just south of San Jose, will have a low prominence. For example, Loma Prieta Peak, the highest peak in the range is 3,786 feet high. Meanwhile, 4 miles to the west is Mount Unhunum at 3,486 feet: a comparably tall peak. However since Mt. Hunhunum  is in the range with Loma Prieta Peak, it's prominence is low, and only comes in at 586 feet.  By contrast, because Loma Prieta peak is the highest peak in the range, its prominence is high at 3,426.
Prominence is defined as:
In topography prominence characterizes the height of a mountain's or hill's summit by the vertical distance between it and the lowest contour line encircling it and no higher summit. It is a measure of the independence of a summit. A peak's key col is a unique point on this contour line and the parent peak is some higher mountain, selected according to various objective criteria. (source: Wikipedia).

For example, if looking at Hawaii's Mauna Kea and Mauna Loa we find:
So which hills are the most prominent in San Francisco? First we think of what is tallest. Below is a list of the highest 40 hills in San Francisco. Following is a list of the most prominent hills. The well know peaks such as Mount Davidson, Twin Peaks, Clarendon Heights, Golden Gate Heights, Larsen Peak and Forest Hill round out much of the top ten peaks. 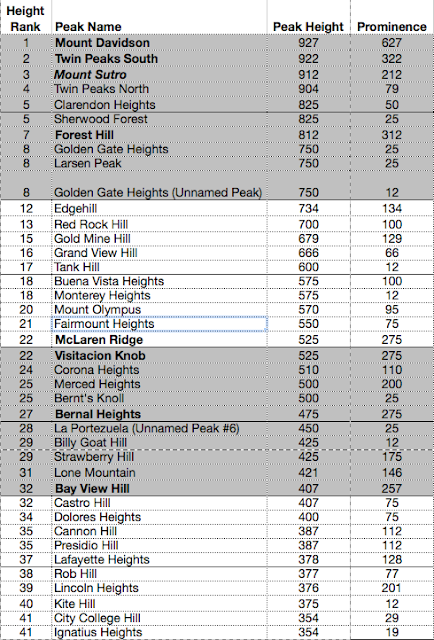 Using my topography map of San Francisco, I measured the prominence of all the peaks in the city by taking the peak height, and subtracting the elevation of the lowest contour line the surrounds the peak with no higher peaks within the circling contour line.

Note that many of the tallest hills are much lower or missing from the prominence list. Goat Hill and Farralon Islands High Point are high on the list due to being the highest points on islands (and in San Francisco). If only mainland San Francisco peaks are considered, Mount Sutro and Hunters Point Ridge/Stony Hill would become the 9th and 10th most prominent peaks. 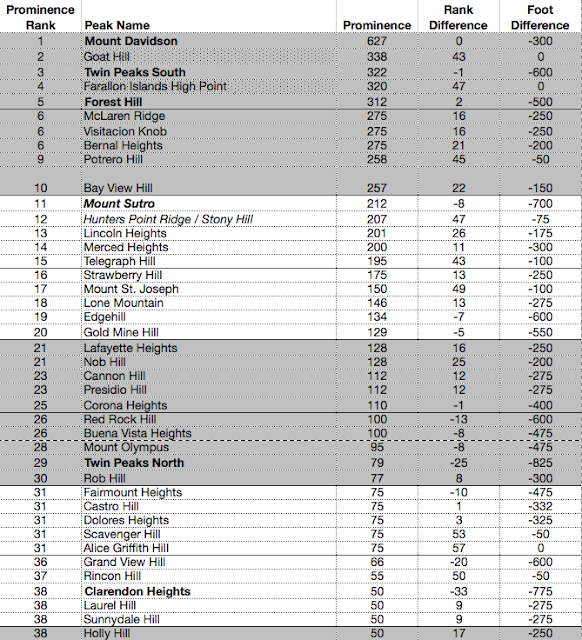 What does this mean? Not too much other than we might notice prominent peaks more than we notice tall peaks. Twin Peaks seem to be prominent due to their height. However, Mt. Davidson has a higher prominence due its 5 feet higher elevation AND there is only a 305 feet "valley" along Portola Drive separating the two peaks. I would argue that Twin Peaks are still "prominent" in our eyes and consciousness due to their distinctive and easily visible bumps, and being visible all the way down Market Street which points straight between the two. 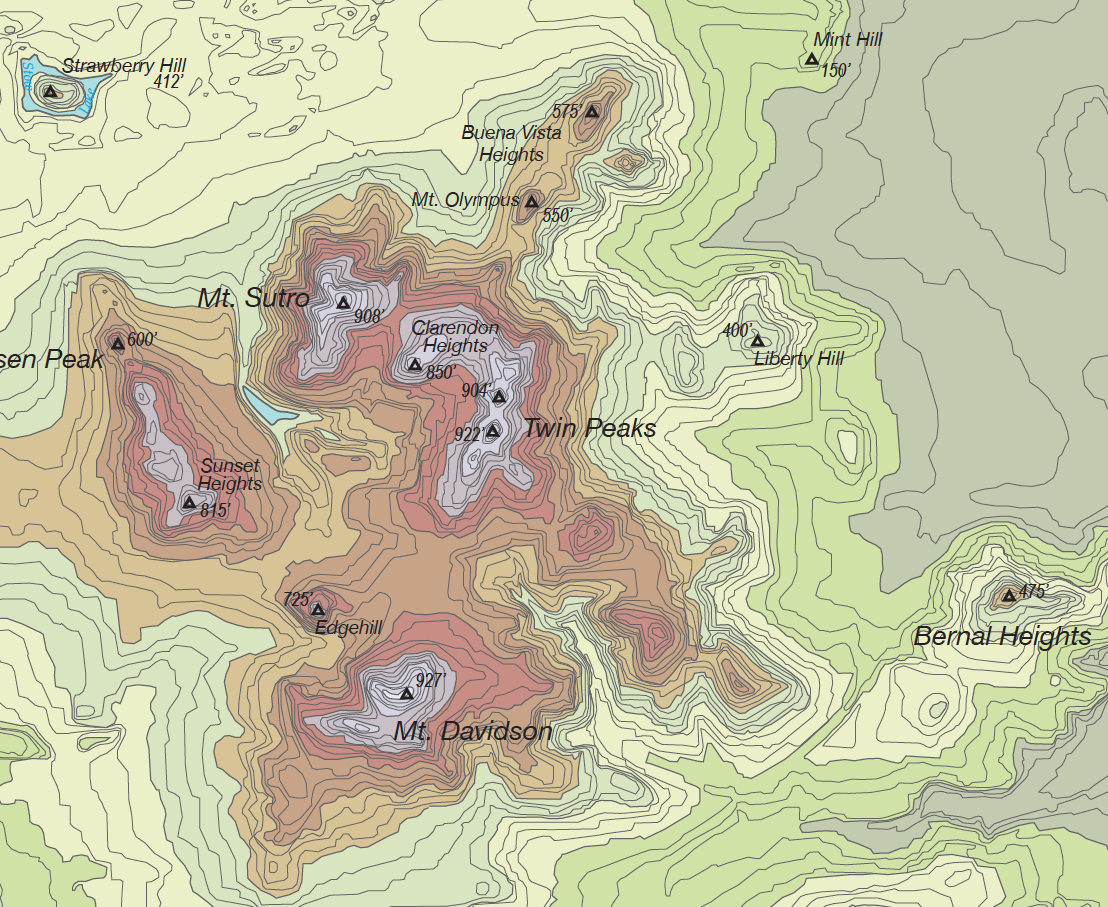 Other lower peaks outshine Twin Peaks and other high hills because they rise almost like island peaks overlooking the flatter reaches of San Francisco, like McLaren Ridge, Bernal Heights and Potrero Hill. Note that Telegraph Hill and Potrero Hills have some of the greatest difference between their height ranking and their prominence ranking: 43 and 45 points respectively. Also note below, that although Nob Hill is 328 feet high, due to the shallower valley along Polk Street, separating it from the higher Pacific Heights, it only has a prominence of 128 feet compared to Telegraph Hill's 195 foot prominence (with a lower height of 278 feet). 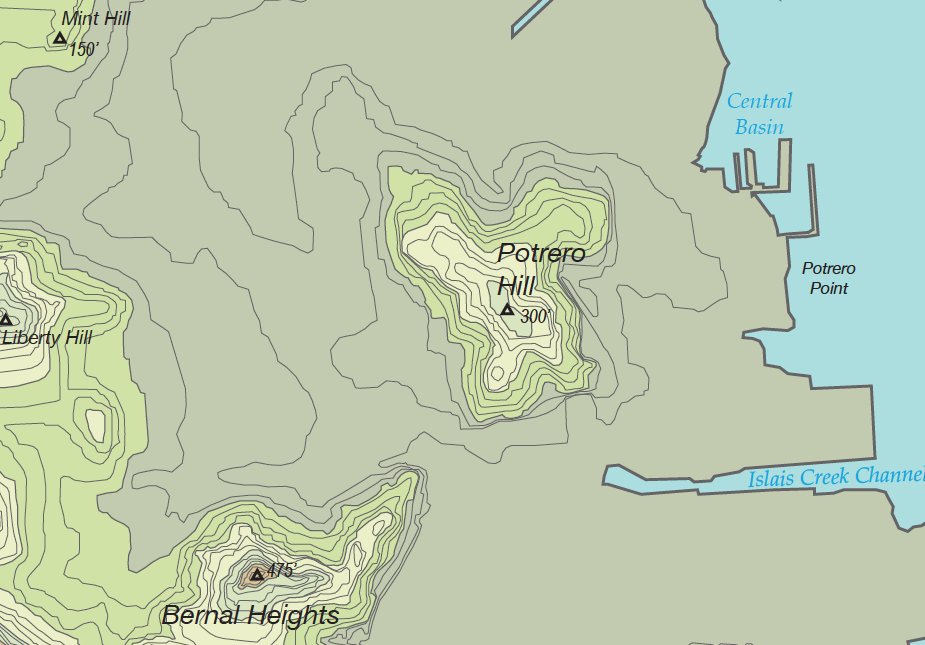 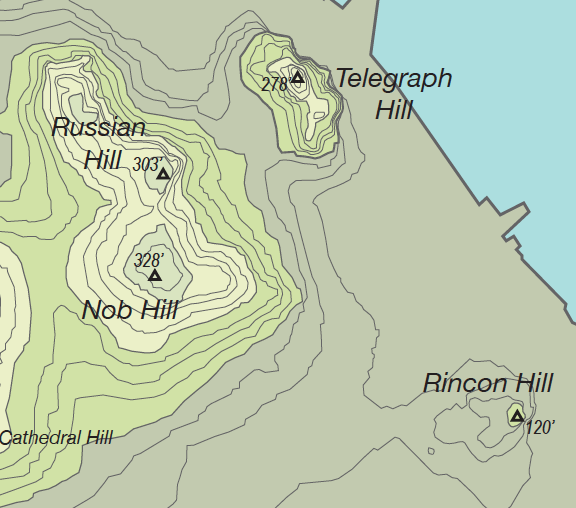 Most notable for unprominence are Clarendon Heights, which rank as the 5 highest peak, but only the 38th prominent peak due to being in the shadow of Twin Peaks and Mt. Sutro. At least they can claim visibible prominence due to being the base of Sutro Tower.

Finally, regarding culture and history, I would add that the first hills of a community may receive much more attention than hills located where development occurred much later and are far from the central business district. From a historic and tourist perspective, the original hills surrounding Yerba Buena Cove and now downtown are part of the consciousness: Nob Hill, Telegraph Hill, and Russian Hill. Less so Rincon Hill due to its lower stature and the Bay Bridge figuratively and physically overshadows the hill. Merced Heights and McClaren Ridge likely receive less attention due to their distance from the bustling center of the city (and the blogger community) than more famous "local" hills like Bernal Heights, Potrero Hill, or even Mint Hill.

Finally, although there is no measure for it, is a hill "prominent" if it is high on one or two sides? but not distinctive form the other sides. This is the case with Black Point at Fort Mason, La Portezuela, and Liberty Hill which rise several hundred feet on two or three sides, but only a modest 25-50 feet on their other sides.

In the end, not a single mountain/hill in San Francisco is super prominent. All of them, including Mt. Davidson must bow down to the most prominent San Bruno Mountain (in South San Francisco) with a prominence of 1,114 feet (height 1,319 feet). As shown in the image below, as seen from Mt. Tamalpais, San Bruno Mountain is prominent, more than Mt. Davidson, Twin Peaks, or Forest Hill. Of course Sutro Tower really dominates: standing on 834 foot Clarendon heights and the tower measuring 977 feet for a total of a VERY PROMINENT 1,811 FEET! (that's 498 feet higher than San Bruno Mountain).