From Haz Site to Condo Site

Most of the new buildings have gone up over old parking lots (299 Valencia with Chase Bank, 700 Valencia with Farina Pizza, 736 Valencia with Mission Cheese, 3500 19th Street (aka 798 Valencia and still under construction), and 411 Valencia was built on the site of a former building and a parking lot. 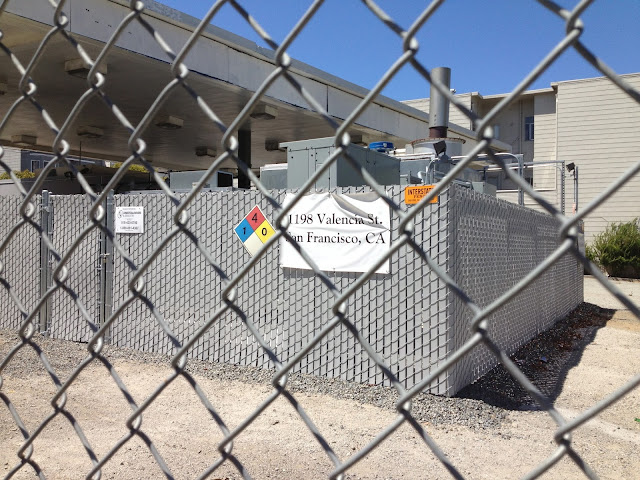 We're also still waiting on a few sites where buildings will be torn down: 1050 Valencia (aka Spork). What's more intriguing are the planned developments at former gas stations. The gas stations at 20th Street (899 Valencia) and 23rd Street (former Tank Chevron at 1198 Valencia) have been vacant for years. What's important is that building on them means cleaning up the dirty ground from years of seeping underground gas tanks.
But now, the market in San Francisco is so HOT that these two gas stations are getting cleaned up and should have buildings go over them. Just don't light a match. I passed the 23rd Street site and noted the NFPA (National Fire Protection Association) diamond.

I had to ask myself, what do these numbers mean. I could only vaguely remember from my NERT training class that the higher the number, the more dangerous. Here's the breakdown: 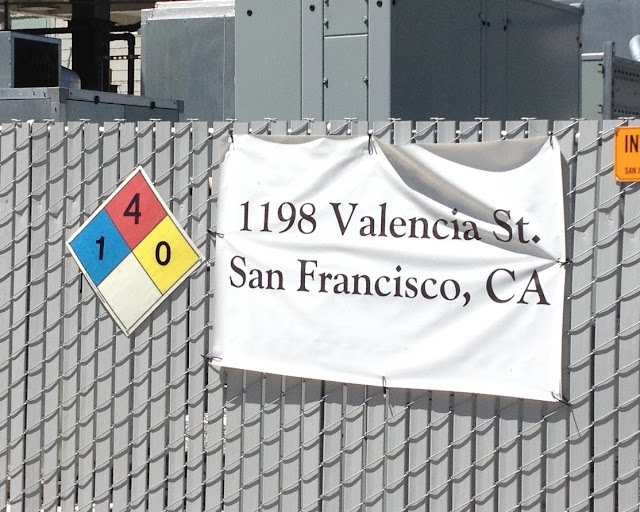 So right away, we know that a zero for yellow and blank for white are good signs. There's no "instability" like possible explosions or violent chemical changes. With no white special hazards, we're in the clear from acid, corrosive materials and radioactivity.

A "1" in health hazard (blue) means that whatever is there (underground gas? underground oil? candy wrappers?) is slightly hazardous and could "cause significant irritation," but will not incapacitate you or kill you.

Will rapidly or completely vaporize at normal atmospheric pressure and temperature, or is readily dispersed in air and will burn readily (e.g., acetylene, diethylzinc). Includespyrophoric substances. Flash point below 23°C (73°F).

I'm not a hazardous materials expert, but that means that on a normal San Francisco day, i.e. 65º F, the site is vulnerable to having a fire! So please don't light up when passing these two sites. I'm sure it's fine, but just be careful.
But that's why the fence is there and the stack and the big machine that's cleaning up the ground.

So after that little scare, I'm still really happy that these long gone gas stations are finally really going away and that our crazy expensive housing market is so hot that developers are willing to clean up these old gas stations. Without the high cost of housing, we'd be stuck with these horrible eye sores for decades. 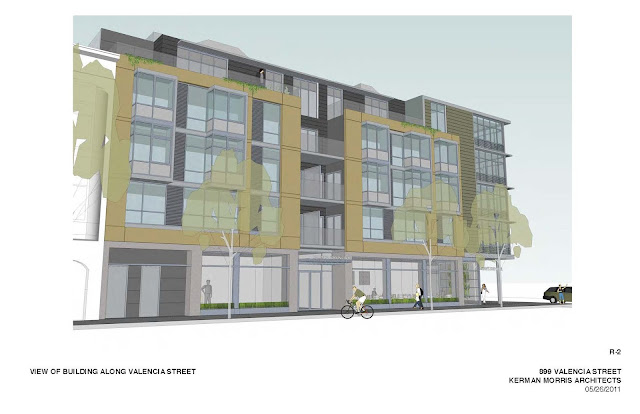 I did look up the Planning Department documents regarding the 899 Valencia development. Due to the proximity to Mission Playground and Pool (that park you never knew was really there), a shadow study (warning: PDF file link) was conducted since the building is planned to be 5 stories tall, like any new building along Valencia Street. This is the first shadow impact study I've looked at in detail.

I understand the shadow impact study is based on a San Francisco proposition that passed which states that if any new development creates any shadow at any time on any day, that it must be declared.

I've now found out what such a study looks like.

Here's what the shadow code says:


cause, unless it is determined that the impact would be insignificant.

So the question is whether shadows from a 40 foot + building would have adverse or insignificant impacts. Sounds pretty mushy to me, but that might be a good thing.

The shadow analysis finds that,

"The Project would cast new shadow on the lawn area of Mission
Playground only in the early morning, before about 9:30 a.m., except during the latter
half of October (when daylight savings time is in effect); at which time shadow would
disappear by approximately 10:00 a.m.;"

Essentially the project would only cast some shadow on the park in the morning when few folks use the park. As shown in the image below, much of the shadow created by the new building is already shaded anyway by existing buildings. Only the very dark shadow is new shadow. Based on the analysis, only 0.06 % of total sunlight would be added by the project. This falls below the 0.10% maximum.

If I get a chance I'll be going out sometime this September to see where the shadows fall currently and how many folks are around 1 hour after sunrise or at 9am.