No Sea of Parking on the Waterfront

Over the past several months there's been a lot of talk about San Francisco's waterfront - the waterfront along The Embarcadero from Fisherman's Wharf down to Mission Bay. Much of the talk has been about luxury housing, walls, arenas, protecting our city, and providing affordable housing. But what do we actually have? a wide boulevard with a series of piers on the bay side, and a mixture of short buildings and parking lots on the land side. Is all of this what protecting the waterfront is about?

The June 2014 Proposition B (Prop B) calls for a citywide vote by the public if any development proposals on Port of San Francisco land should go over height limits zoned for this land. The height limits currently vary, but range from 40 feet (3-4 stories) north of Broadway, and up to 84 feet (6-8 stories) near the Ferry Building. Until now, the planning and approvals process for construction on the waterfront (and in most places) must go through a series of planning procedures, including public input, planning commission approval and sometimes board approval and eventually permitting.

"Prop B requires voter approval before building height limits can be raised on San Francisco's publicly-owned waterfront. It gives voters, not just developers, a voice on the waterfront that belongs to all of us." - Kate Lobby, Sierra Club

Sounds compelling. Who wants a wall on a lovely waterfront? Why would requiring a city-wide vote on height limits be a bad thing? However, thinking critically and asking more questions I reflect: I didn't realize that the waterfront was governed by an oligarchy of developers. I thought, and know, that the waterfront land use and regulations are governed by the Port of San Francisco and by the San Francisco Board of Supervisors.

1. What exactly is the "waterfront"?
2. What's at the waterfront today?
3. What are we trying to protect?
4. What do we want our waterfront to look like?

Answering this question is easy. Although the waterfront, and the area covered in Prop B covers the shoreline from Fisherman's Wharf down to Hunters Point, for the sake of argument here we'll consider the "waterfront" to follow Embarcadero (street) from King Street near AT&T Park in the south to Jefferson Street in Fisherman's Wharf in the north. The waterfront zone consists of all the water and land from the bayside edges of the piers to 1-2 blocks landward of the Embarcadero. Most of this land is owned and under the jurisdiction of the Port of San Francisco.

Stepping back for a moment into history, let's remember that the waterfront was a much less desired place to spend your time recreating prior to the 1990s, and especially prior to the 1960s. Reason being it was an active port with many warehouses, the Belt Line Railroad running through the middle of Embarcadero, and the double-decker Embarcadero Freeway looming overhead.

The water/bay side uses of the waterfront have changed dramatically in the 22 years since the Embarcadero Freeway was removed. The Ferry Building has blossomed, the Exploratorium just opened, and even the shopping pier, Pier 39, added vitality to the waterfront.

However, the land-side uses are virtually identical to what they were 30 years ago in the 1980s! So why no change? I honestly don't know why. One thought is that it's not worth buying or leasing a super expensive property that can only go up 3 stories and be built as a boring office building away from where most offices want to be.

Current development and land use:

Bayside
Historic piers with water views between. Some piers are pedestrian only and offer great views of the bay and the city if you look back.
Nice wide Herb Caen Way for pedestrians and people on bikes.
Pier uses vary, but there is a mix of restaurants, offices, museums, the new Cruise Ship Terminal, and ultimately a shopping mall in at Pier 39 with historic looking wooden architecture. 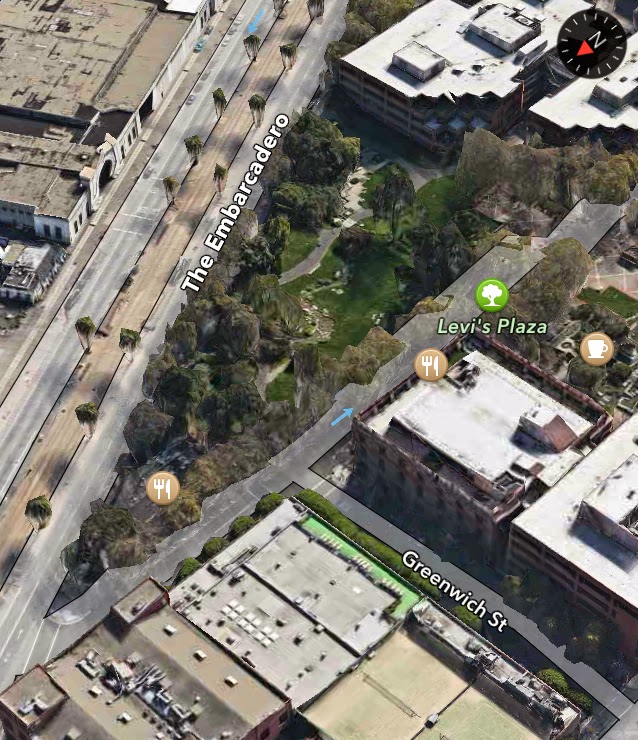 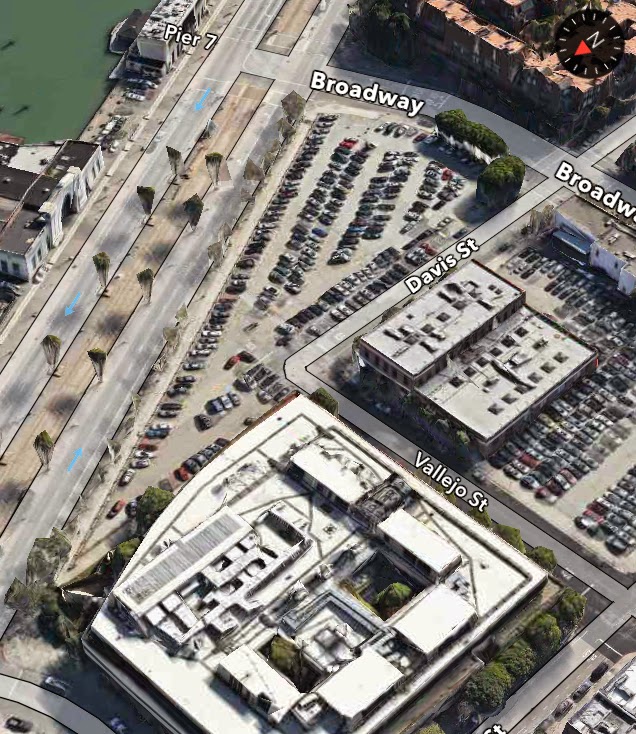 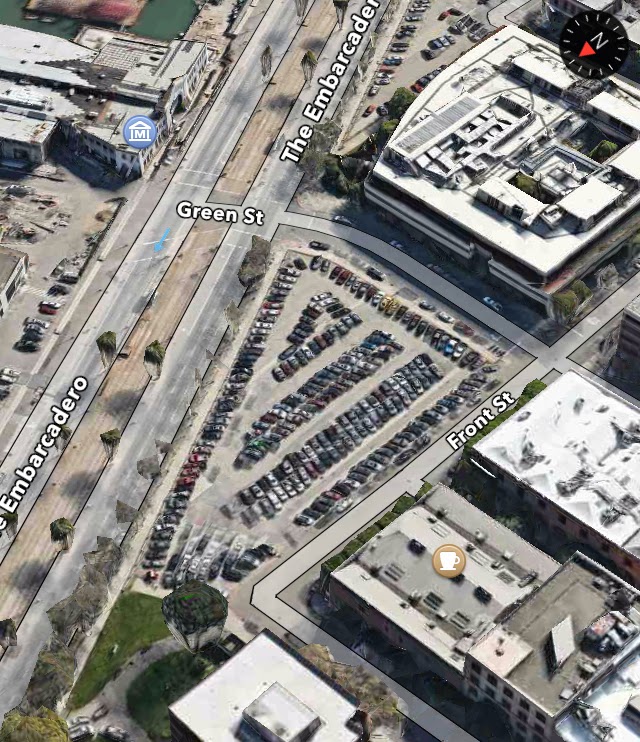 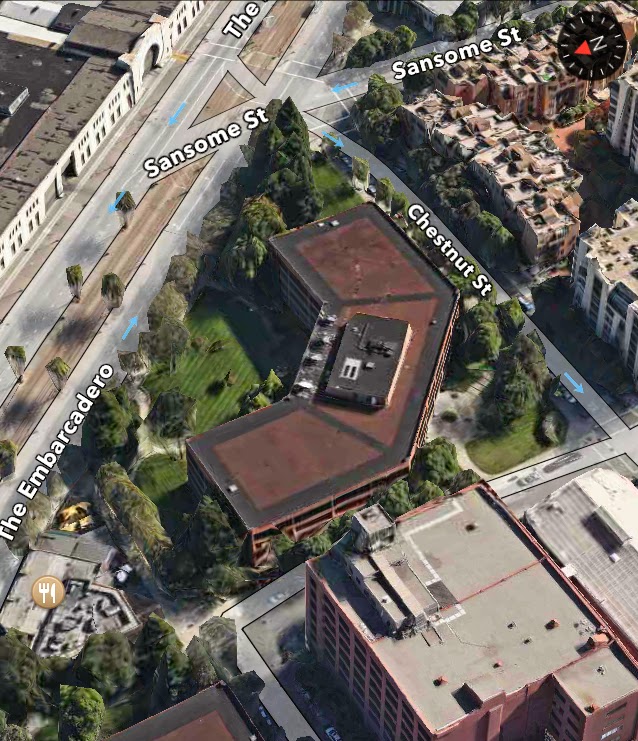 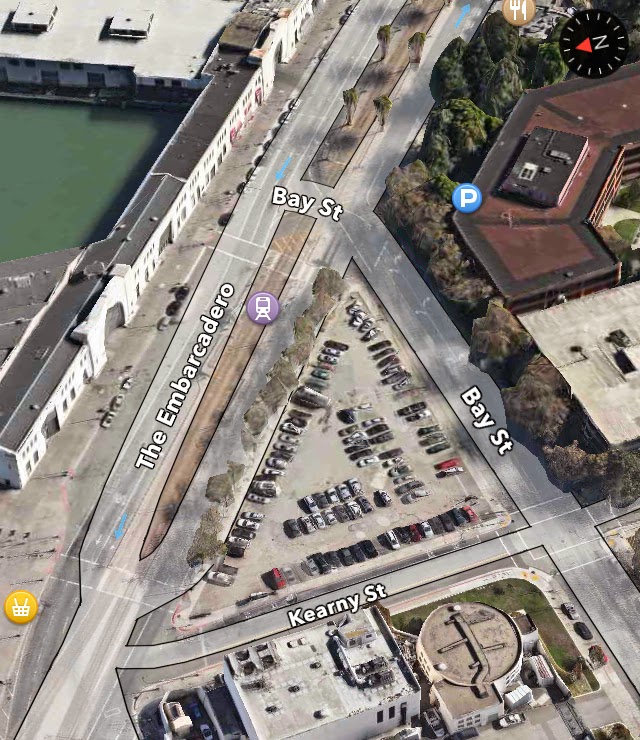 Views
Views vary as you walk along the Embarcadero. Looking towards the bay, views are more limited than you would imagine. Every pier blocks the view of the Bay while walking down the street. Luckily many of the piers have lovely Art Deco entrance facades that make them look very nice. With activated uses, the “view” is pleasant.

Looking towards the city, however, there are ample views due to the propensity of parks and parking lots. As you walk north from the Ferry Building you can see Coit Tower almost the entire walk up to Fisherman's Wharf. Likewise, walking south, you can see the downtown skyline including the Transamerica Pyramid and the Bank of America Building. However, the Embarcadero Center acts as wall with its 4 long and very tall buildings, blocking off the view of the rest of Downtown. Even the short 3-4 story office buildings block nearly all views while walking on the west side of the street.

Interestingly, the San Francisco Planning Department's Northeast Embarcadero Study looked at the same area and found the study area characterized by the following:
So we have a near great water-side waterfront, and a very crappy land-side waterfront. What do you think is worth protecting? Well the folks who say "no wall on the waterfront" want to protect the crappy part apparently. They couch it in saying, keep the existing height limits, but in fact they probably want no new development.


4. What do we want our waterfront to look like?
Personally, a series of parking lots and low slung 1980s office buildings that butt up on a narrow sidewalk are not what I’d consider a GREAT WATERFRONT. I do consider the bayside walk to be pretty nice, but that side is not what is under contention.

Reviewing the Northeast Embarcadero Study, I'd say that study proposes what I would want. I'd only add that I'd do a 1-2 combo to improve on it. Raise height limits somewhat, from 40 feet, up to 60-70 feet, but have critical view corridors maintained so that when you walk out of the Exploratorium, you can still see much of Telegraph Hill and Coit Tower. Likewise, as you drive south on The Embarcadero, a view of the Pyramid or the Downtown skyline should be kept at one or two locations.

Finally, don't take my word for it that Prop B (version June 2014) is bad for San Francisco. Check out Markasauras' informed take on Prop B titled "The Unintended Effects of Direct Democracy: Say “no” to ballot box planning on Proposition B June 3rd.".
Email Post
Labels: blocking views Embarcadero height limits Moneybags NIMBYS parking lots Prop B Proposition B view corridors views Wall on the Waterfront