The Bay Bridge and the Transbay Tube connect two places: San Francisco and Oakland. Too often the Oakland side is either ignored or made as a footnote in the Bay Area. With the booming local economy and corresponding traffic congestion (highway and rail), there has been recent talk of building a Second Transbay Tube (#2ndTransbay). Much of the talk, (Urban Life Signs included) has centered on where a 2nd Tube’s rail lines would go in San Francisco (SoMa? Mission Bay? Market St?). Now it’s high time to talk about where and what kind of rail should go to Oakland and the East Bay.
Why a new Tube?
A new tube, whether for BART, or commuter rail and high-speed rail, is needed for multiple reasons: 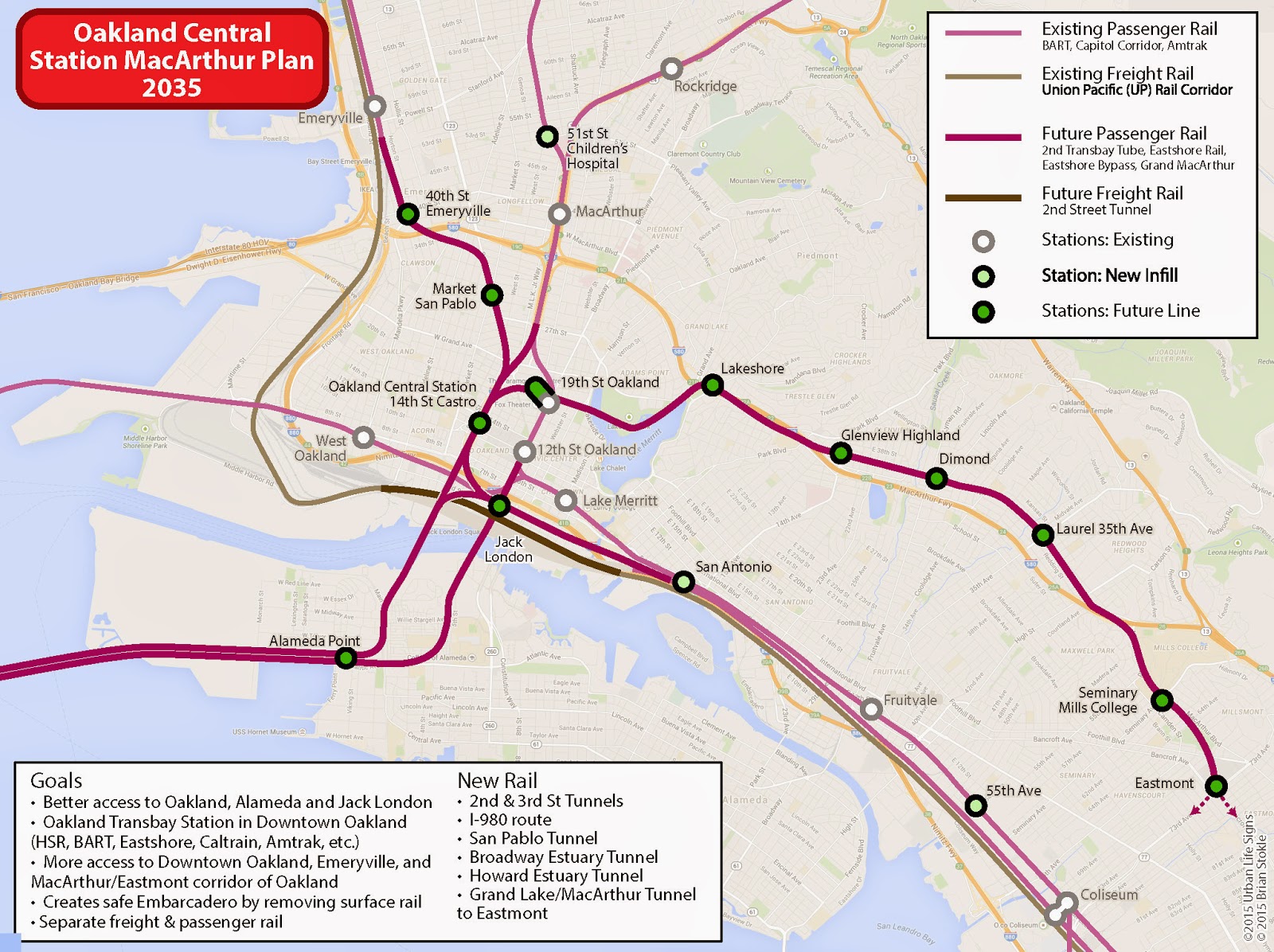 Factors in deciding where a new Transbay Tube should go

Four-Bore or Two Bore
Many have suggested that a 4-bore tunnel (2 BART tracks + 2 conventional tracks) be built to allow a BART gauge rail line + a standard rail line for Caltrain, CapCorridor and future High Speed Rail. Building a 4-bore tunnel would be more expensive that one 2-bore tunnel, but presumably cheaper than building two separate 2-bore tunnels.

The challenge is that a 4-bore tunnel only makes sense if the two rail lines (BART & HSR) are near each other at each end of the new 2nd Transbay Tube. If it’s deemed that BART really needs to arrive in Mission Bay in San Francisco, but HSR arrives at Howard St, these are not near each other. Likewise, if an Oakland BART tunnel arrives via Alameda but an HSR train arrives in Oakland near Emeryville, a 4-bore tunnel doesn’t make sense.


BART trains run on a unique gauge (track width) of 5 feet 6 inches. All other trains, including Caltrain, Amtrak, CapCorridor, future HSR, and ACE all run on conventional gauge, which is 4 feet 8 ½ inches. Due to the uniqueness of BART’s gauge, its capital and operational costs are higher than a standard gauge subway/metro system. A new BART rail line could have standard gauge, however, it could not interoperate with the original BART lines. A cost-benefit analysis should be made to determine whether a new BART line in a new Tube should be made to BART gauge or Conventional gauge.

Rail Service
Whatever gets built, transit rail service between San Francisco and Oakland should be planned for all modes. A comprehensive look at Transbay crossings is necessary (and is happening). Any new Transbay Tube should be part of a plan that includes not just BART, but also Caltrain, CapCorridor, future High-Speed Rail and a future Eastshore Rail service. All of these services could use a new Second Transbay Tube.

The Proposals
I've put together four rail alignment proposals. One is based on alignments presented by BART. Others incorporate ideas that I have heard from other folks or I have considered myself. All of the proposals have the following:
Finally, note that many of the ideas and alignment pieces presented below can be mixed and matched. Rail on I-980 could be BART or conventional rail or both. Likewise the MacArthur Eastmont line could be conventional rail or BART rail. If it were conventional rail, in most instances it would be served by commuter rail/metro rail with an overhead catenary wire. But the technology is less important. For this reason, the rail lines are not distiguished between BART gauge and conventional gauge. 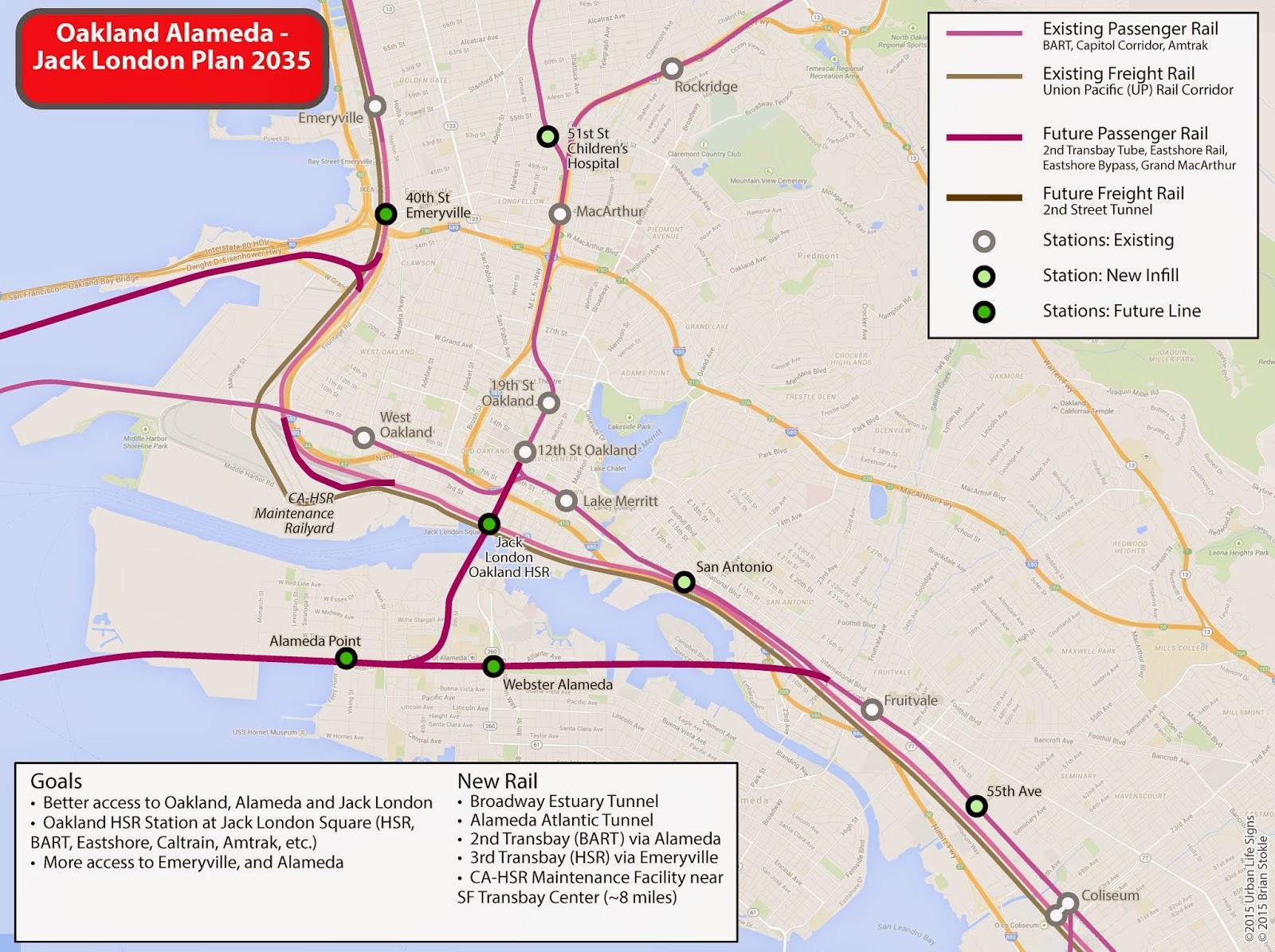 This plan is based on vague alignments being considered by BART in its BART Metro Vision. The proposal has two transbay tubes: a BART tube connecting at Jack London Square and near Fruitvale, and a High Speed Rail tube entering Oakland just south of Emeryville. The existing Broadway Tunnel would be upgraded from a 3-bore tunnel to a 4-bore tunnel, adding capacity. An intermodal station in West Oakland is unnecessary as the same functions are served by the new Jack London Oakland HSR station.

The idea for a Third Transbay Tube comes from Roland Lebrun, who suggests that conventional rail should arrive in the former Oakland Army Base because rail from the San Francisco Transbay Center should leave via Howard Street in SF. To keep things simple, let's call this the Key Route alignment since this is where Key Route rail passed before the Bay Bridge was built.

The Central Station MacArthur Plan calls for using the underutilized Grove Shafter Freeway (I-980) right-of-way to connect high-speed rail, BART and commuter rail to a new transbay tube, but also continue on under San Pablo to Emeryville to access existing rail to the north. The new MacArthur Eastmont Line reaches many high density neighborhoods east of Downtown Oakland.

Eliminating or decking over I-980 makes sense both for building a rail line in the current trench, but also because it would relink West Oakland to Downtown. I-980 was only completed south of West Grand in 1985. We here at Urban Life Signs proposed a rail line in I-980 back in 2011, when we suggested using half of the trench of rail and keeping the other half for freeway traffic. Others such as ConnectOakland have suggested filling in the entire freeway and replacing it with a boulevard.

In addition, BART could easily connect to an adapted I-980 freeway. The tracks run in the median between I-580 Nimitz Freeway until 27th Street. They could easily have new tracks connecting to an I-980 alignment south of 27th St and West Grand. Building this connection, along with a 2nd Transbay Tube, would allow much more flexibility and shorten construction time in building the Broadway Estuary Tunnel from the Oakland Wye (at Broadway and 9th St) to Alameda. 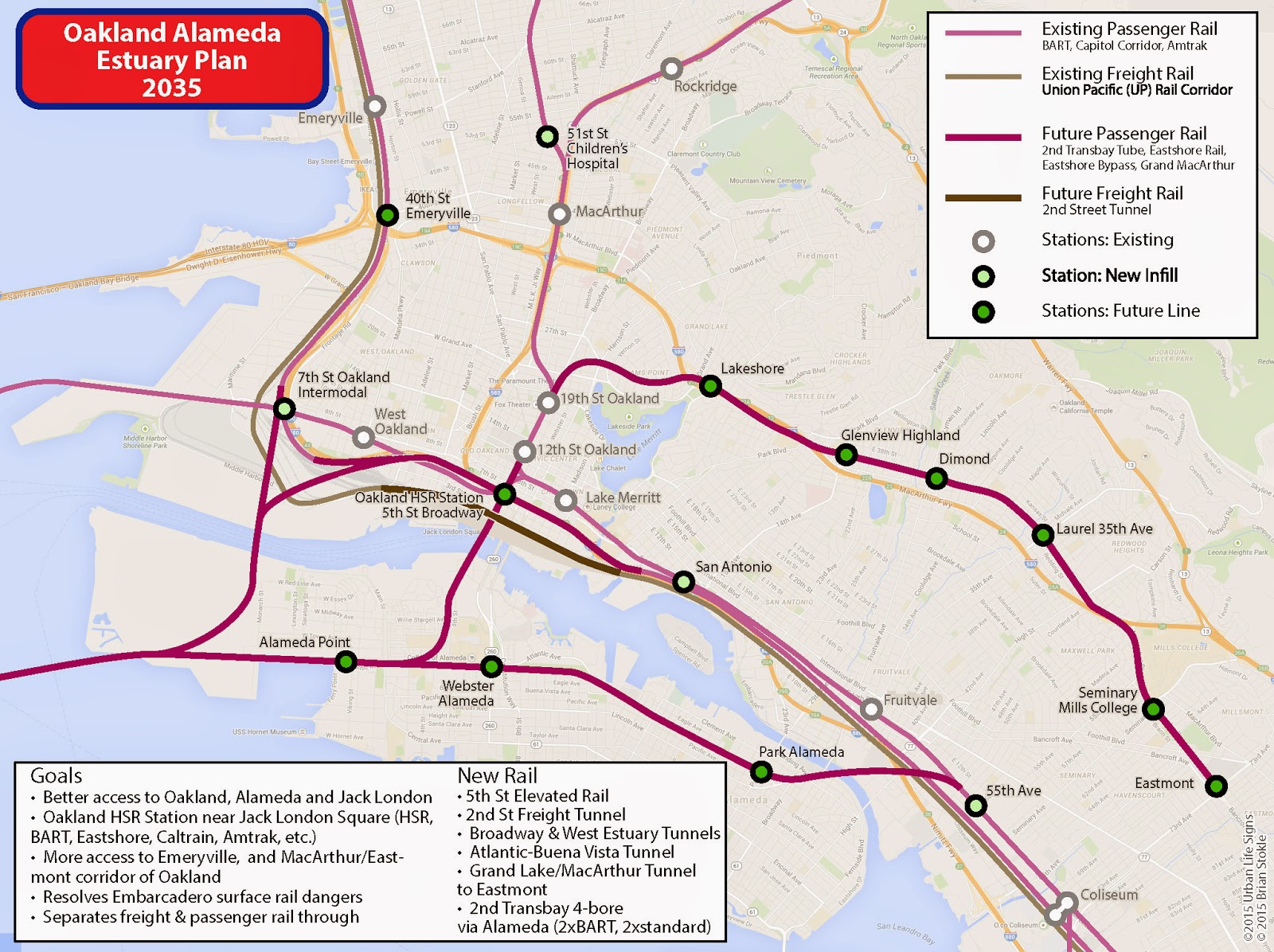 The Estuary Plan focuses a new BART line in Alameda, and also connects to the BART Broadway tunnel. Commuter rail and HSR would follow a new elevated line along 5th Street between Oak St and Adeline St. The MacArthur-Eastmont line enters the BART Broadway Tunnel just north of Grand. 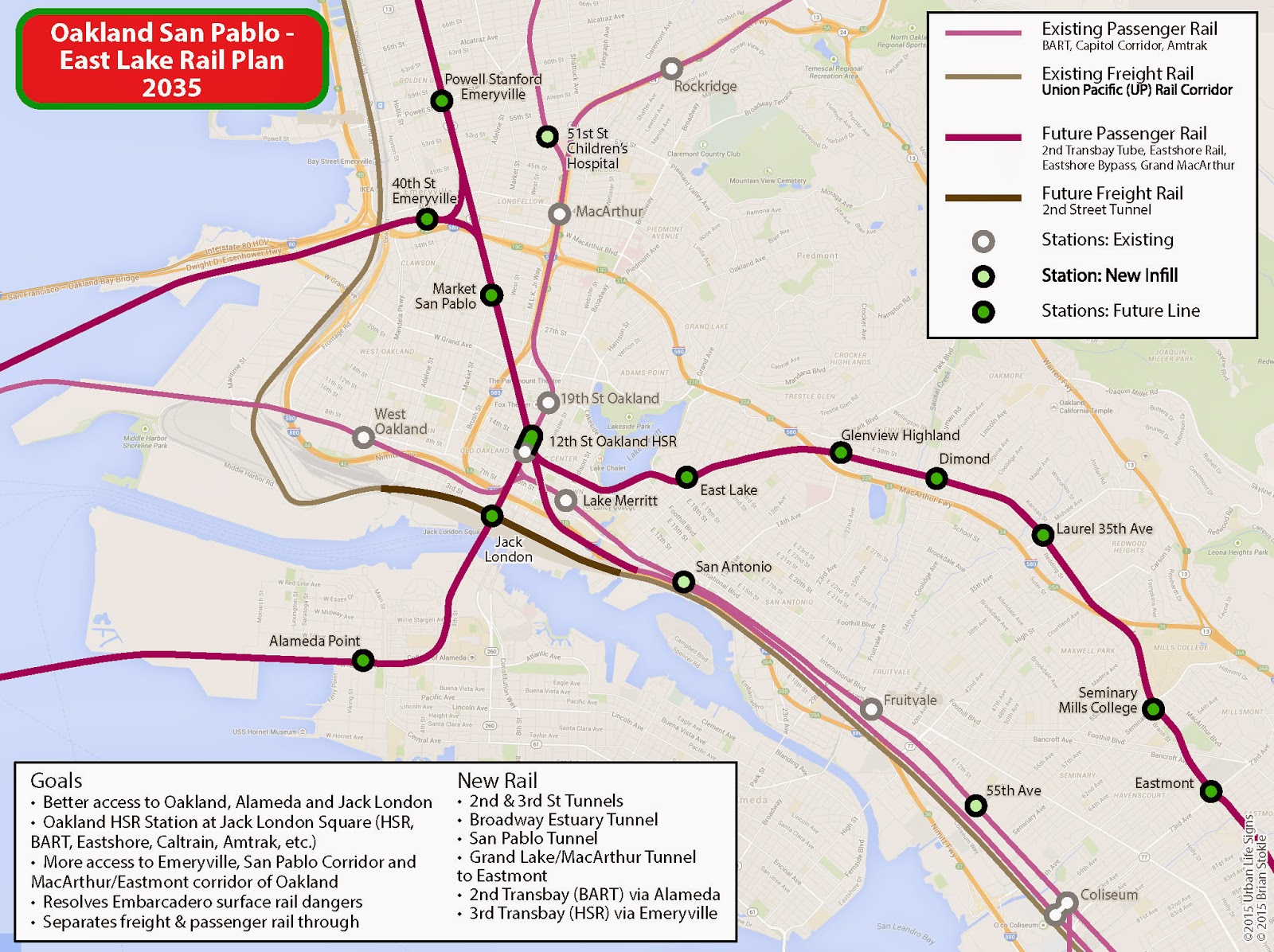 The San Pablo - East Lake Plan calls for an ambitious rail line down San Pablo into Downtown Oakland, and continue along the axis until connecting to a new San Pablo axis that re-connects to rail southeast of Laney College. A grand high speed rail and commuter rail station would be located underground at 14th St.

Capacity
Although many of BART’s current crowding challenges stem from issues unrelated to the tube (2-door cars, crowded stations, old train control system), it will eventually need a second tube to increase capacity. Note that if stations from a new tube are placed near existing BART stations, crowding will decrease due to a new tube offering an alternate way to the same office district.

Redundancy
We live in a seismically active area. San Francisco, Oakland and the Bay Area will only thrive after a major quake if its buildings, roads and rail can reopen soon after. Having a second tube and new rail lines will offer a better chance that at least one of the lines can stay open.

Expanded Transit Options
Having more options to take transit will encourage transit use and reduce congestion on regional highways, especially that number one congested Bay Bridge. Rail lines that go into new areas of already dense San Francisco and Oakland will allow folks living and working there to consider taking transit instead of driving. Having more transit usage and less driving reduces our regions carbon emissions. Every little step to reduce global warming helps.

More Transit allows More Housing
When we build new rail lines and stations, we must increase the density of housing a jobs near train stations. I’m not calling for creating new downtowns or 40-story buildings, but rather two to four 20-story towers, plus a series of dense apartment buildings be built within a 2-block radius of new stations. The Bay Area is growing, and we cannot continue to force new housing into the Central Valley and making newer middle class residents commute over one hour to get to job centers. We need to densify in existing cities around transit hubs.
Email Post
Labels: 2nd Transbay Tube high speed rail I-980 I-980 removal Jack London Station MacArthur Eastmont Oakland Oakland Central Station San Pablo Tunnel Second Transbay Tube Transbay Transit Center