...take me north on a numbered street to GearyLand.

Folks heavily preferred 2nd Street and 3rd Street in this year's poll on Transbay Tube alignments. At least that's what the poll results of the Second 2nd Transbay Tube Alignment through SoMa Poll find. Nine months ago, I polled several 2nd Tube alignments when the Townsend and Folsom alignments virtually tied for first place. For this year's poll, "East-West" alignments (Folsom and Townsend) duked it out with the new upstart "North-South" alignments (3rd St and 2nd St). A bonus choice for Pier 70 and Potrero Hill was given modest attention. 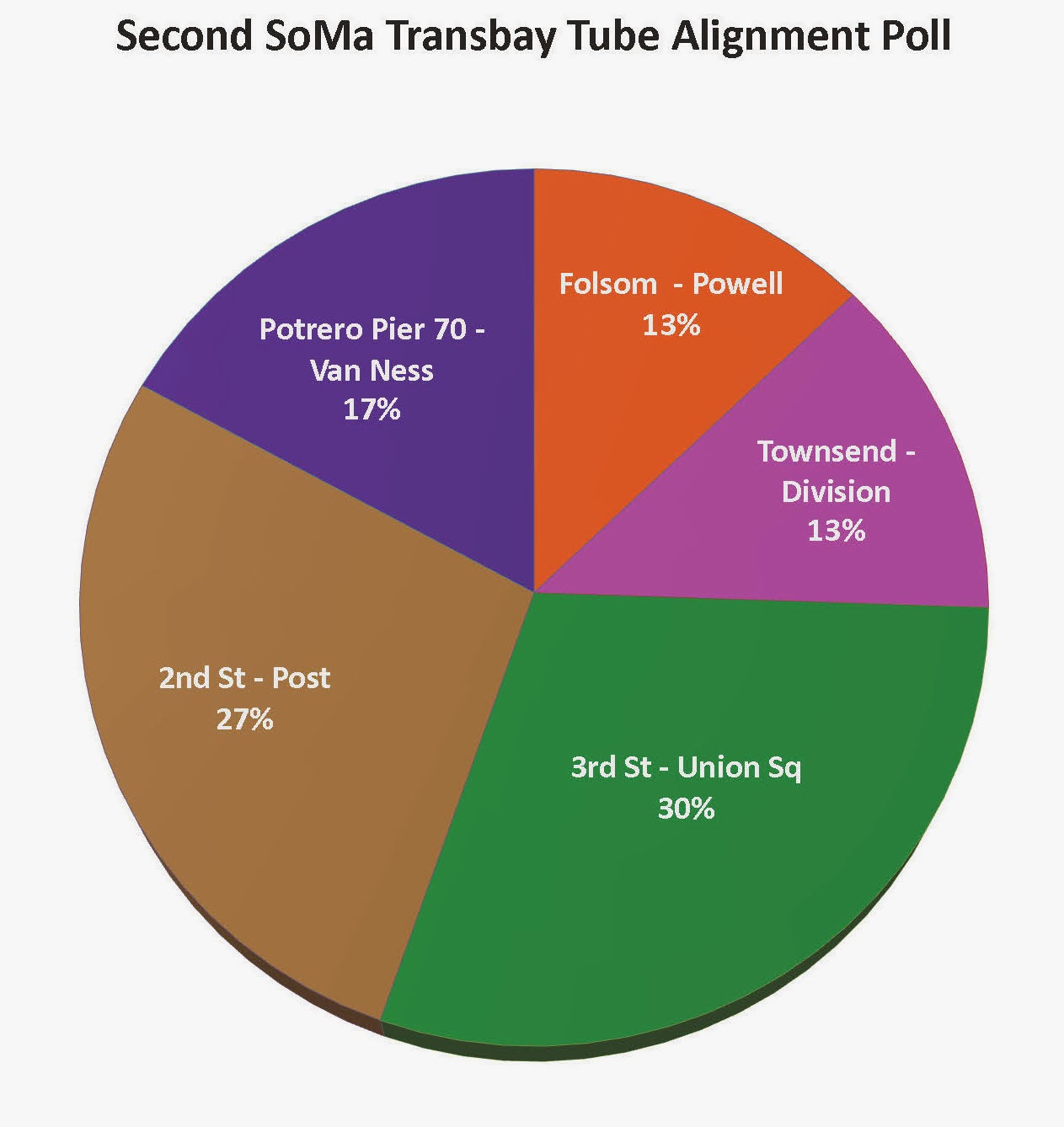 With 47 total votes, the poll was a success. However, this year's poll (2015) only received about half as many votes as the 2014 poll, which received 93 votes. Does that mean anything significant? Probably only that I promoted the 2014 poll much more than the 2015 poll. The bigger the outreach, the more feedback. Lesson learned. 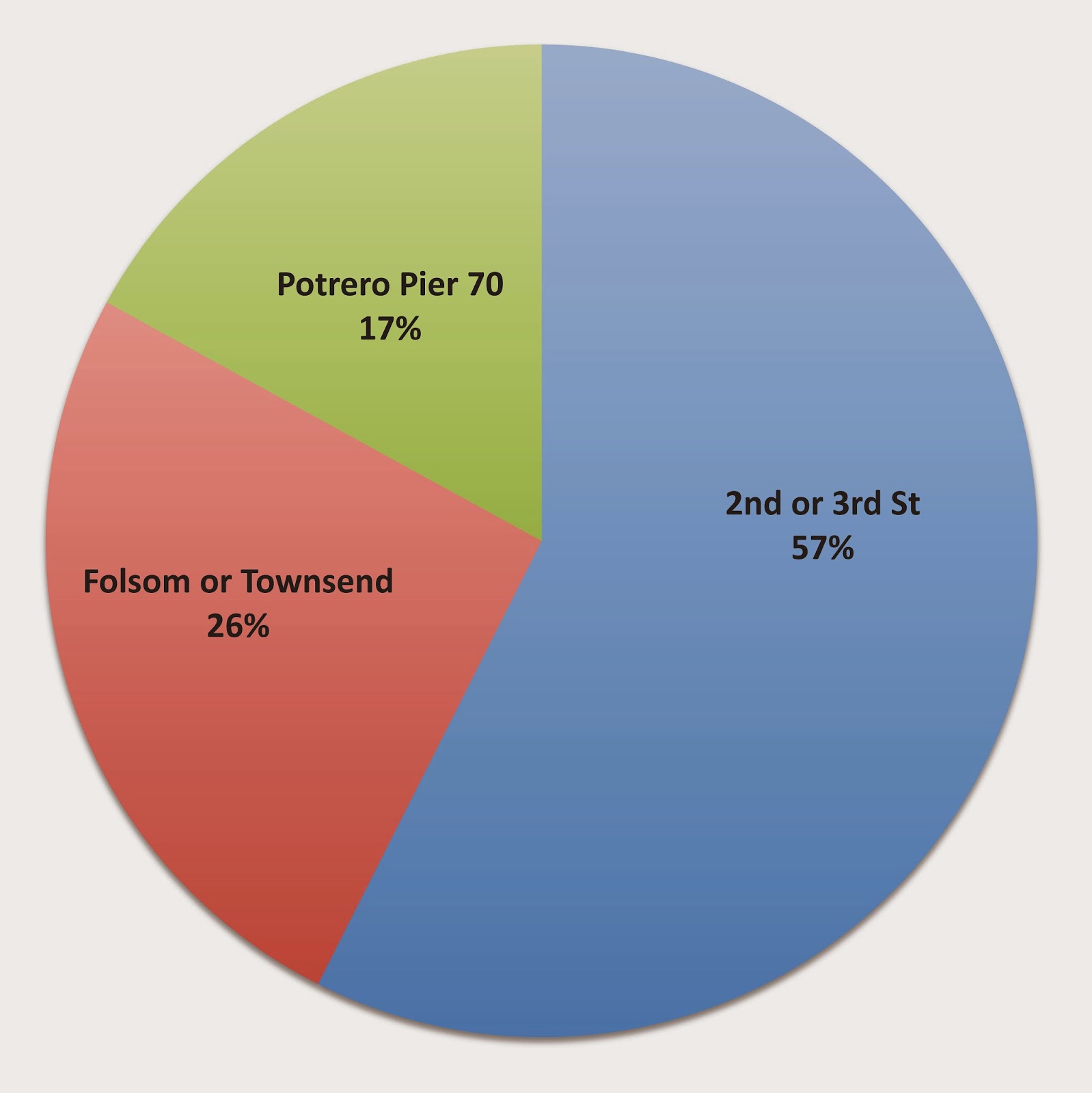 Unfortunately I didn't poll the 2nd or 3rd St alignments in the 2014 poll so we don't have any direct comparisons to make. The major changes between the polls are that the new Warriors Arena is coming to Mission Bay, the Giants won a third World Series, and a lot more residential and office towers have been built or are under construction in SoMa and Mission Bay. Possibly the most important element is the high crowding on BART and that BART has started discussing the idea of a second transbay tube. Maybe this all adds up to supporting the 3rd and 2nd St alignments. Or maybe it's just the persuasively vague map BART produced on the topic. 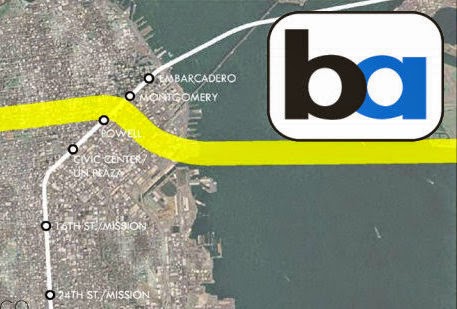 Using the same analysis summary from last time we get the following summaries for 2015 and 2014:

The scoring analysis shows clearly why the 2nd St - Mission Rock alignment is so popular and would meet most of the needs in a new Transbay Tube. With the 2nd Street - Post Mission Rock alignment passing through southern Mission Bay via Mission Rock past the new arena, near the Giants Ballpark in South Beach, and on past the Transbay Terminal Transit Center, the Financial District and on to the Tenderloin, this alignment is hard not to like. To make the difference between 2nd Street and 3rd Street alignments more clear, I'll be calling the 2nd St alignment the "2nd St - Mission Rock" alignment from now on. The 3rd St - Union Sq is virtually the same except it doesn't pass Mission Rock and does not allow for a direct transfer to the Transbay Center. And that is why 2nd St-Mission Rock scores a 10 instead of a seven. There are a few drawbacks. The route is longer and has more stations, which would cost more. In addition, it is a little bit less straight and requires a southern approach from the East Bay. A four-bore 2nd Transbay Tube would likely not work with this scenario.As I've mentioned before, any planning for the 2nd Transbay Tube should be planned in concert with the Caltrain DTX tunnel, and connecting the Transbay Center (HSR, Caltrain, etc.) with the East Bay. This could mean there is a single 4-bore tunnel or two separate 2-bore tunnels. In the end a cost/benefit analysis is necessary to examine each alignment for costs, benefits, station locations, time to build, and many other factors.Now if we could just find a way to finance the construction of this. Anybody know where $12 billion can be found?
Email Post
Labels: 2nd St 2nd Transbay Tube 3rd St BART Cost benefit analysis Folsom Mission Rock Pier 70 poll Second St Second Transbay Tube Third St