Expanding our Rail Network while Saving it from the Seas

Sea Level Rise and Climate Change. Most of us in the Bay Area seem to believe it's happening, know we need to reduce carbon emissions and need to get ready for rising seas. Unfortunately, apart from a few examples, we're actually not doing much in the way of physically getting ready for rising seas.

The Bay Area's transportation infrastructure is significantly threatened by sea level rise. All three major airports are at or near sea level. Much of our freeway system is close to the sea (I-80, Hwy 101, I-880). The Port of Oakland, and many pieces of our rail and transit system are under threat. Virtually all of this infrastructure was built before sea level rise was known or understood.

However, we must get ready for the coming higher storm surges and sea rise, to protect our infrastructure – for without our transportation system, we cannot function as an economy or an interconnected regional society.

How can we ensure that our 100-year investment in new rail won't be squandered by the lack of sea level rise preparedness? (You don't put on your seat belt in a car because you think you'll have a car crash - but you do want to be safer in case it does happen. With a 100-year investment you better not place your investment where you know it will be flooded someday.) Preparing for sea level rise must be treated just as we prepare for earthquakes – as an inevitable reality that we prepare for by investing in stronger buildings and infrastructure.

One way to ensure that our infrastructure is safer would be to create redundancies where duplicate infrastructure is needed anyway. In the case of mass transit, the Bay Area clearly needs more capacity and service. Building a Second Transbay Crossing is one of those redundancies we need. A new “tube” and associated rail approaching the crossing would also provide a backup tunnel to repair the first one, and offer late night service. 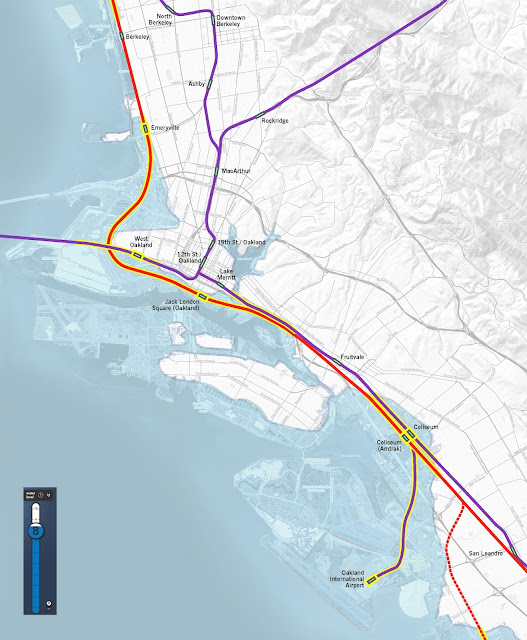 
Rail Segments at Risk of Flooding

Focusing our attention on rail and on Oakland, we find that several segments of both BART and the freight rail infrastructure are at risk from sea rise. Although predictions indicate sea level may only rise 6 inches to 2 feet in the next 80 years, some have said it may go as high as 4 to 6 feet. With infrastructure that should last 100 or more years, it is much safer to build assuming seas will rise on the higher end of the range.  If we roll the dice and hope for a 2 feet rise, but get 6 feet sea rise we have squandered BILLIONS of dollars.

BART
Although BART is elevated in many sections, it also goes underground and at ground level in a few spots. BART is at grade when it passes I-880 between Lake Merritt and Fruitvale. In addition it is momentarily at grade where it enters the Transbay Tube at the Port of Oakland. Although elevated in segments, areas that may flood would still affect the train as the columns holding up the aerial tracks were not build to withstand water inundation and wave action.  The tracks near Oakland Coliseum are in a zone that would be flooded if storm surges rose 8 feet even though the tracks would be above the water. 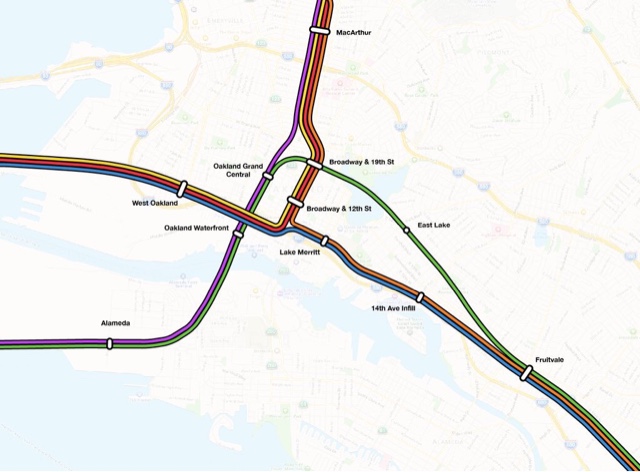 
CAPITAL CORRIDOR
Much of the Capitol Corridor follows the shoreline - at sea level - all the way from Martinez to San Jose, with a few spots in Richmond and between San Leandro and Fremont where it is less vulnerable. In Berkeley and Oakland, the corridor is at risk from 8 feet sea rise north of Berkeley Station at University, from Emeryville station south all the way to 23rd Ave, and from High Street to just south of Hegenberger Road. These are very long segments, with lots of business, homes, infrastructure and industry surrounding the rail.

SOLUTION
In planning for a new 2nd Transbay Crossing, let's make sure the new crossing and approaching do not go through sea rise zones. Simple idea. Sounds impossible under today's political climate, but if you really think about it, it's the most prudent and right thing to do.

Eastlake Tunnel: Seeing that the BART Green/Blue Line segment is at risk near the Oakland estuary, I propose the Eastlake Tunnel to serve the highly dense Eastlake neighborhood with the rail spurring north of Fruitvale, avoiding sea level rise affected zones and passing through higher elevation zones including Eastlake, Downtown Oakland, and the I-980 Corridor. Other Oakland corridor options could follow 14th St, Franklin or Madison. However, 980 is the only alignment that is all of the listed items: 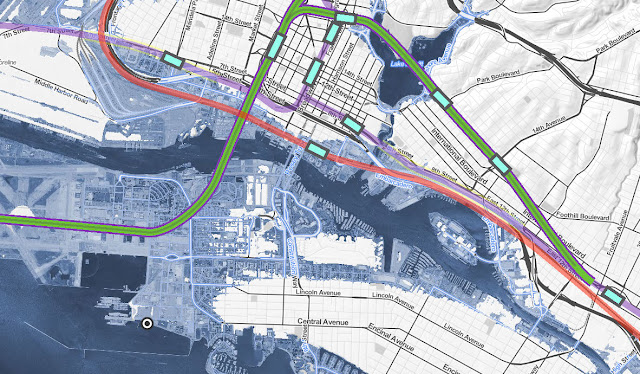 Coliseum Sea Protection: The Oakland Coliseum area is at risk. Building an elevated rail lane staring further south from 98th Ave, although advantageous, would be much more expensive and disruptive. At this point, when most people believe in Sea Level Rise (SLR) but don't act on it and don't fund ways to address it, this alignment is less plausible.

Instead, the elevated segment at Coliseum should be fortified or armored in such a way that the elevated rail can withstand sea rise, with its waves and eventual permanent flooding of the land. This would seem to be doable, and could be done at a later point closer to the time when this area is threatened.

Addressing sea rise for the Capitol Corridor and Union Pacific (freight) rail corridors is a bigger challenge but possibly even more important. Maintaining the Port of Oakland is critical, and just as critical is the rail access to the port.

San Pablo Emeryville Tunnel
Creating a new commuter rail tunnel from Emeryville to 980 under San Pablo Ave would put passenger trains under dryer land, and separate freight and passenger rail. Although current rail in Emeryville south of Powell St is on the 8' foot elevation, it could still be defendable, and would allow freight to create its own armoring of rail to the port.

The San Pablo Emeryville Tunnel would lead to the 980 transit tunnel and the 14th St Station there, providing access to Downtown Oakland.

Moving south, rail could follow one of two alternatives: one sufficient, the other ambitious.

Sufficient: After 980, the commuter rail tunnel could turn east under 5th St or the current I-880, then follow the existing right of way east of the Lake Merritt inlet but now on top of a levee, or as a tunnel under 12th Ave, until it reaches higher ground east of 23rd Ave.

Ambitious: After 980, the commuter rail tunnel could continue deep and south under Alameda Island, but then emerge on Bay Farm Island as part of a new levee there to protect the Oakland Airport. The line would continue south and finally reconnect with existing rail near Marina Boulevard and Dolittle Drive in San Leandro. The levee would help protect the airport and provide a new separate rail line that accesses the airport, in addition to Alameda Island if it is protected.