The Oakland Athletics baseball club is still looking into where it should locate in Oakland. In January we looked at car and parking access at the sites under consideration. Folks, a lot of folks, get to games via transit - especially rail transit. Let's look at how the sites stack up for current transit access and possible future access.

Trains (or reliable bus service) need not be at the doorstep of the stadium. Many folks are willing to walk up to a mile, especially if the walk is pleasant. The Giants relocated to Pacific Bell Park in 2000, which is about a mile from Montgomery BART station. Having a station a bit closer, such as a half mile, is better because more folks will opt to take transit instead of driving, resulting in less highway and street traffic on game day.

Luckily the N-Judah tracks were extended to the Giants' ballpark doorstep by the first game, so folks from San Francisco could get a direct ride, or transfer from BART. Similarly, Caltrain is only a quarter mile away. However, keep in mind that thousands of people coming from the East Bay take BART in walk to the game, even when the area was less developed.

How far, by walking distance, are the current A's sites from the nearest BART and Amtrak stations along with the nearest ferry landing?

In scoring the locations and transit, we'll weigh BART much more than Amtrak, which runs much less frequently than BART and carries fewer people. Here's how I scored transit access:

Distance from x a weighted factor:

One way to explain the factor by average attendance per game and how folks got there. Over the past 10 years, the average game attendance has been just above 20,500. If we simplify and say 20,000, let's assume that 10,000 people arrive by car.  (The parking lots hold almost 10,000 parking spaces). If 10,000 people came by transit then the scoring is factoring that 85% come by BART, 10% by Amtrak and 5% by ferry. Although this isn't likely the case currently due to no ferry being close by, it will be a reasonable proxy for a future ball park and a weighted score.

The lowest score is the most desirable. 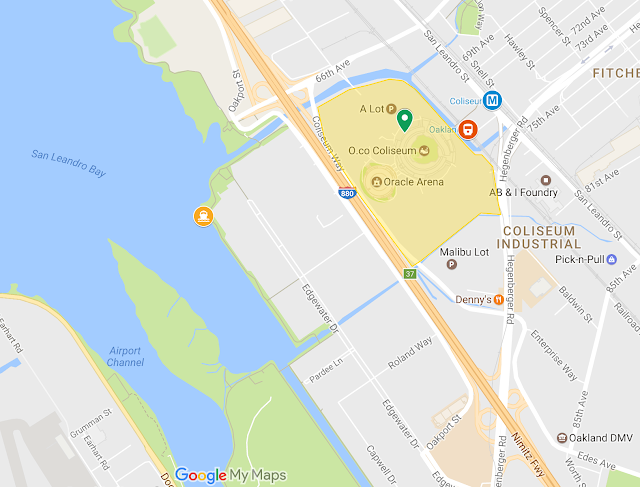 Here's what we get for scores based on today's rail transit access to future ballpark sites when only considering BART and Amtrak: 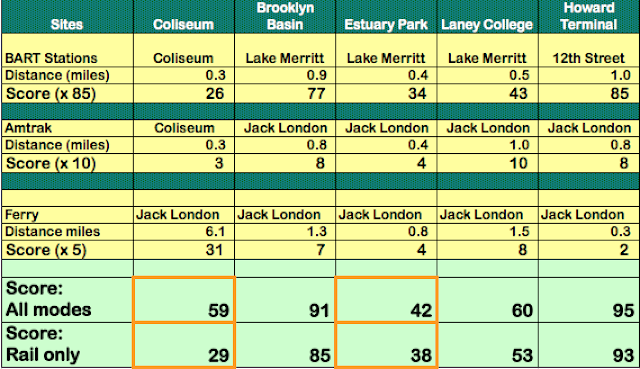 Adding in the Ferry factor doesn't change much, however the Coliseum is really not a fair score being that the Oakland ferry is 6.5 miles away. Consequently, I've given a second Coliseum score with ferries that assumes a new ferry landing in San Leandro Bay about 0.9 miles away.


So the Coliseum site is clearly the best location for transit access, based on today's transit, and the likely transit for next 10 years. It's hard to beat the Coliseum's 1/4 mile walk to BART and Amtrak and its 29 point non-ferry score. Laney College Fields and Estuary Park score reasonably well due to being close to both Lake Merritt BART and the Jack London Amtrak station. Howard Terminal get's the worst score with and without ferry access with a 93 point non-ferry score. BART is 1 mile away while Amtrak is 3/4 mile away - both adding to its undesirable high score. 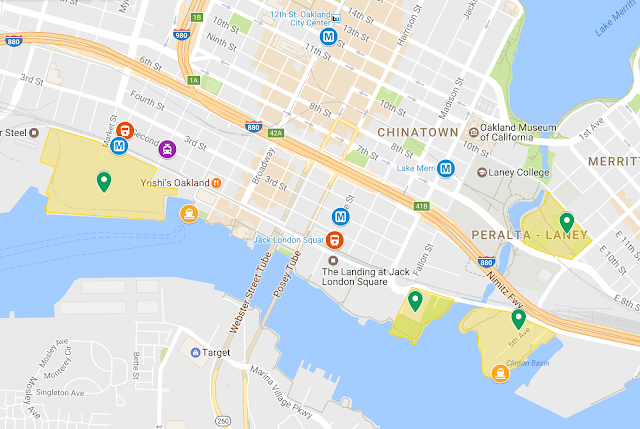 Based on the past 70 years, and from what I read about stadiums, they're meant to last about 50 years. Some are shorter (I'm looking at you Turner Field), and some are longer (Fenway Park and Wrigley Field). What if we planned for access today, but also considered transit access in 5, 10 and 15 years, when it might get better, and you might need less parking.

For each site, the current transit or promise of future transit varies. For the Coliseum, Laney College, and Estuary Park, the transit is already good. Could it get better? We'll see in a moment. For Howard Terminal and Brooklyn Basin it's currently lacking, but it might get better.

What new transit could come in 5, 10 or 15 years, especially if it were prioritized, funded, politically backed and benefited folks beyond the baseball stadium area. A bus rapid transit line could come in 5 years, a streetcar in 10 and if you pressed hard, BART in 15 years.

Streetcar
The current thinking is that Oakland might benefit from a streetcar. The streetcar would link classic downtown (Broadway & 12th) to Jack London Square and other points along the waterfront. A streetcar could go to all the "downtown" sites: Howard Terminal, Estuary Park, Laney College Fields and Brooklyn Basin.

While the Coliseum is far away from downtown, one could argue that Oakland could use a streetcar in many neighborhoods, including near the Coliseum. A streetcar could go up Hegenburger and 73rd to Eastmont, or up and down International. I'm not sure of how much better than buses it would be, but it's a thought.

In any of these cases, the added streetcar only really adds dramatic benefit to the stadium access for Brooklyn Basin and Howard Terminal. For the others it would be a bonus. For the neighborhoods, a streetcar would greatly be a benefit to all, especially those that would have added development potential surrounding them: Estuary Park, Howard Terminal, and Brooklyn Basin.

BART
Adding BART would be a greater benefit to a stadium, even those that are near an existing BART station. The second transbay crossing is the best bet for a new BART line, or a line that will eventually lead to a 2nd Transbay Crossing. Where would such a crossing go? and would it be near any of these sites?

Coliseum
It's unlikely that a new Transbay crossing would arrive at Coliseum Station, unless there was a change of heart and an airport-to-airport tube were built. This is highly unlikely and would get enough ridership to justify its construction, but it would mean a new BART station between Coliseum and, say, maybe South San Francisco. 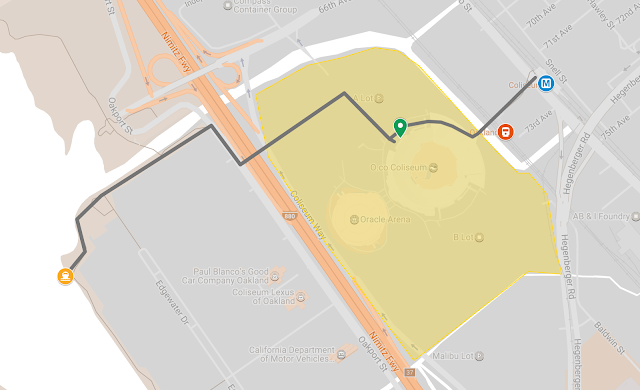 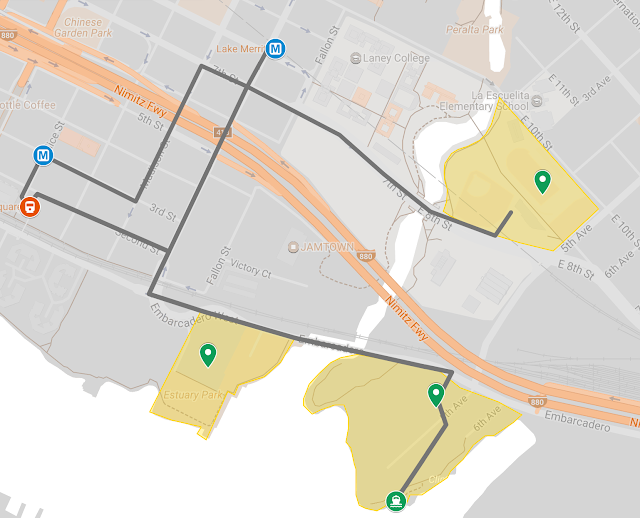 Howard Terminal, in my eyes, has the best chance of getting the new BART 2nd Transbay line to pass nearby. The Connect Oakland proposal to bring BART under Brush St, where I-980 currently runs, directly intersects the Howard Terminal site. It would suddenly put a station at the stadium, much like today's Coliseum. The transit access score for the stadium would plummet from a 93 score to an 18 score, even better than the Coliseum's low 23 score. However, would waiting 15-20 years for such a line be worth it? I don't know. 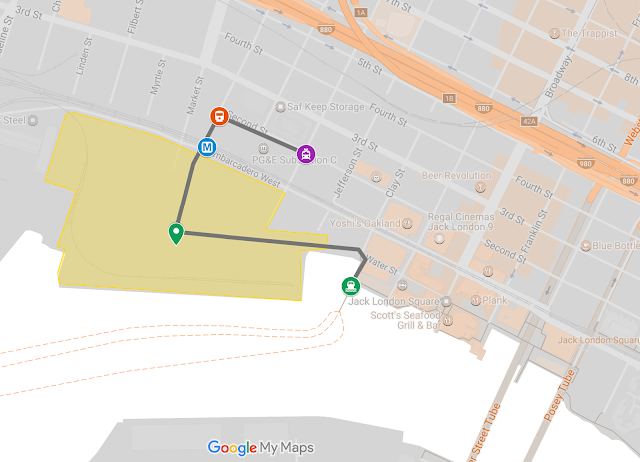 Here's how the scores actually stack up with and without ferry service. 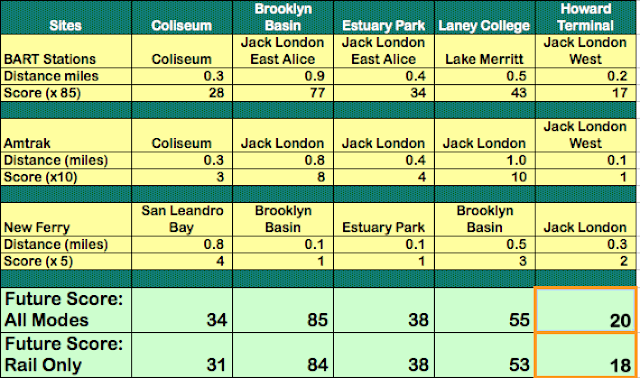