To run parallel or across: SF Edition

Last post we looked at parallel subways throughout North America and examined how the distance between them might aid in the Bay Area's hoped for new subways, especially a second transbay rail crossing. We applied it to Oakland. This time we look at San Francisco to see how it might apply there.

San Francisco clearly needs an extra separate subway line to relieve the overcrowded and stressed Market Street Tunnel and Transbay Tube.  Putting a new line through its downtown would relieve the current line, and allow for even more people to take transit to work in San Francisco. Note, that a parallel subway line is just one way to address capacity.  A line that runs perpendicular addresses some of the same demands, just in different ways. We'll talk about that a bit later.

BART passes through four stations along Market Street, while Muni Metro passes through seven. In addition, if you take in the BART's curve down Mission Street to the south, the line has six stations from Embarcadero to 24th St Mission. 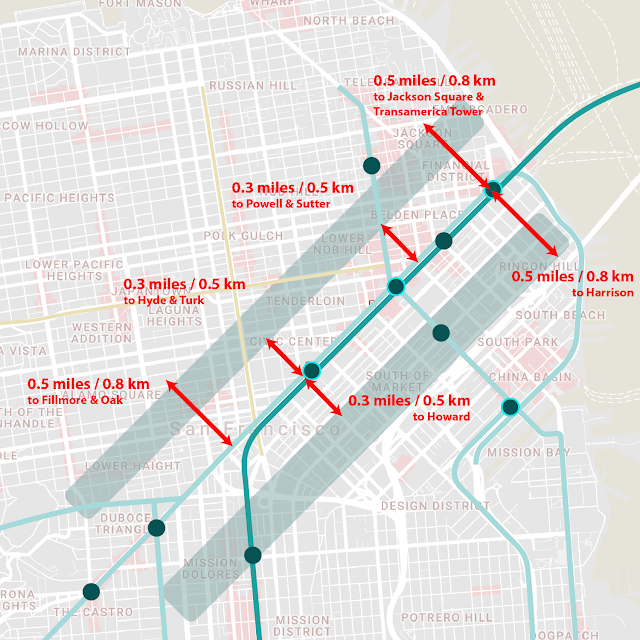 If we use the sweet spot distanced, 0.35 miles away, south of Market, then Folsom Street is at this distance and runs parallel to Market through SoMa. If the parallel line were to continue further south, bending into the Mission District, an "optimum" street not too far, and not too near to BART would be Harrison Street between Division and 24th St. Stop locations could include:


To the north, the street grid does not run parallel/perpendicular, so a parallel line would be more difficult to install, or at least would need to be deeper to avoid footings of existing buildings. That all being said, if we force this parallel line into existence, we find a few possible station locations:
By no means is this the only places such stations could go. The stations would likely need to be at least 100 to 200 feet deep to avoid some taller buildings with deep pilings or foundations that go to bedrock, especially in the financial district.

Further south, parallel to Mission Street, the line would run down Dolores Street if at 0.35 miles away, with possible stations at:

The idea of such parallel lines 0.35 miles from Market to Mission shows how distances could work, but would only work most of the station areas were significantly upzoned and densified. 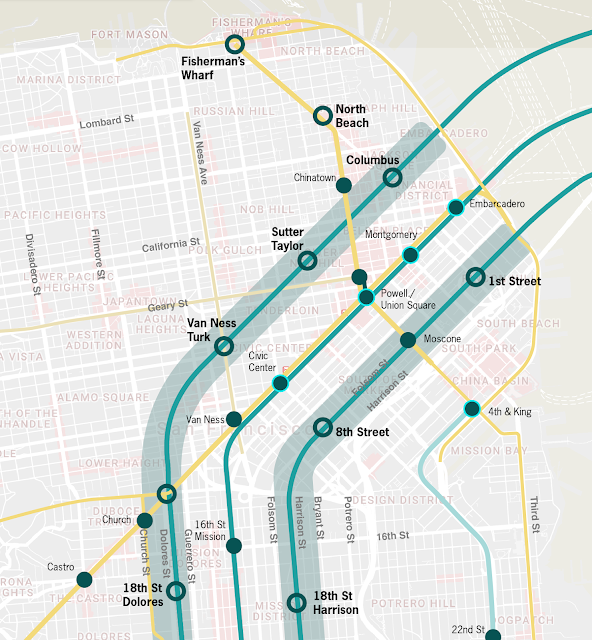 The attention to BART as the primary subway system in the region is understandable. It reaches a majority of the Bay Area, and is the most "advanced" of the systems However just because it runs on a different technology and has a different name, we should not forget about Caltrain and the Downtown Extension (DTX) to the Transbay Transit Center. Although not parallel to BART, any future planned 2nd tube should take the Caltrain line into its planning process. 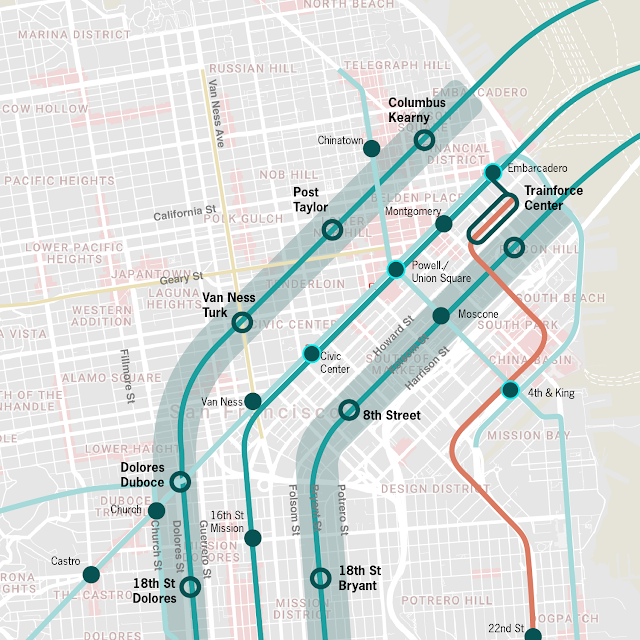 Continuing the parallel lines as a starting point but adding in the need for folks to transfer between the old line and the new line, having a hybrid of a parallel line while also crossing at some point may be the stronger formula.

Option one takes the north of Market route, while crossing Market Street at Civic Center then following Harrison St south through the Mission. An alternate plan, as shown below, has the Folsom line in SoMa turn west to follow Hayes St. Another street like Fell or Grove could work too. 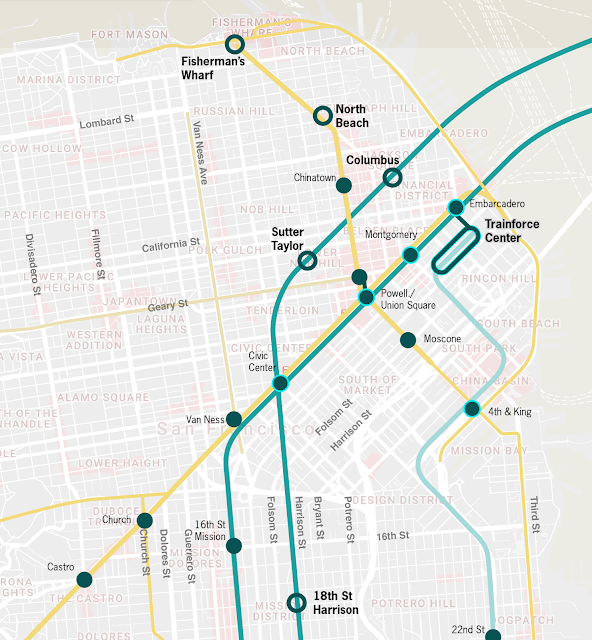 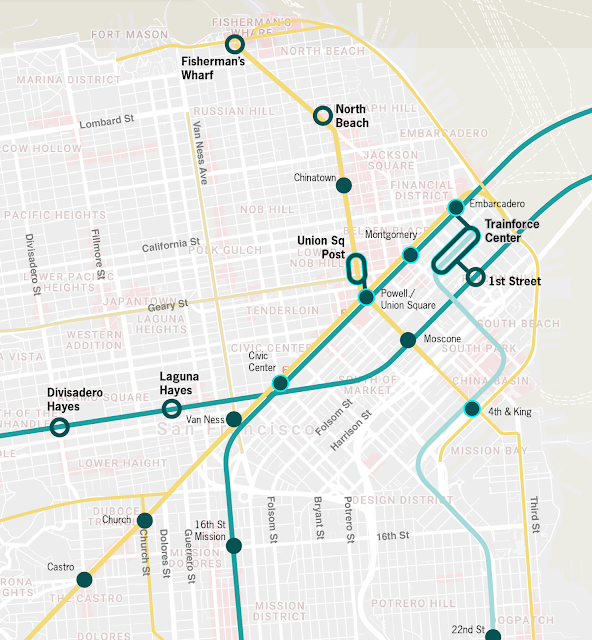 Talking about parallel lines is really just a tool to think about where and how a new metro or subway rail line should pass through San Francisco from a second transbay crossing.

In my opinion, the crossing approach is more compelling to me, as it achieves better coverage, creates stronger new transfers. As shown in previous blog posts, I believe a 3rd St/2nd St line that turns west down Post then on to Geary is the best option for the people it serves at homes, and jobs, and critical serves. 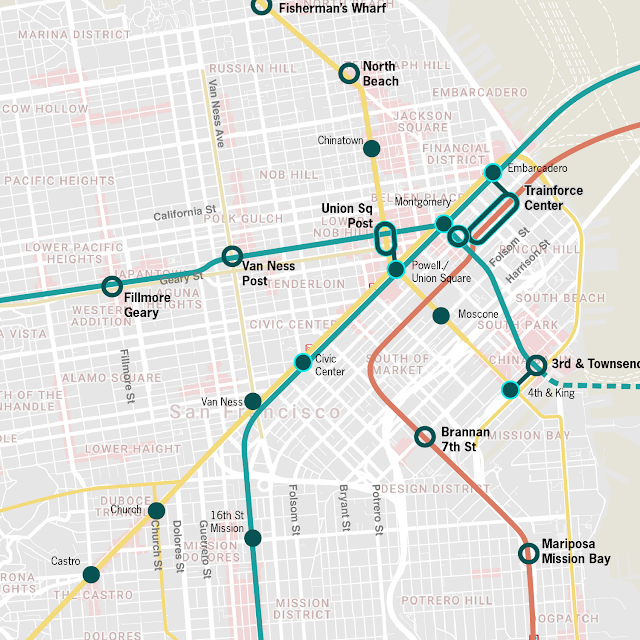 At the same time, a reroute of the Caltrain DTX line to avoid sea level rise of at least 6' is also prudent. Providing stations in south Mission Bay / north Dogpatch, as well as Brannan and 7th, you get a line that skirts the significant sea level rise zones of Mission Bay and South SoMa near the 4th & King Railyard. At the same time, it still serves the attraction points of jobs in Mission Bay and South SoMa, entertainment at AT&T Park and Chase Center/Warriors Arena, and the thousands of people who live in Mission Bay, Potrero Hill, Dogpatch, and SoMa.

The Trainforce Center would host:

The Union Square/Powell hub would host:
An alternate option is to take the new BART line up 5th Street instead of 3rd and 2nd Streets. The benefit is it goes through Mission Bay and the new South SoMa developments. However it would go directly through the more at risk areas that would experience flooding if little to no mitigations for sea level rise are installed.