Amber Dhara has arrived. After near a year of construction and 4 months behind a construction wall of artistic graffiti, the Indian seafood, small bites restaurant has signs posting that it is open. Well at least that's what the signs say. The good news is that a space that was closed for over a decade (if not decades) is open. The bad news is that this is yet another restaurant - when will restaurant saturation arrive. If it's anything like the point of cafe saturation on Valencia, we still have room for more restaurants. The other good news is a new was planted.
Firstly, on a landscaping/sidewalk note, one of the pre-sidewalk widening trees died soon after construction of Valencia finished in 2010. The tree and it's "well" were located next to the original curb, but after widening the tree well is about 3 to 5 feet from the new curb. Although the tree was cut down, a hard packed dirt tree well remained. We hoped during that time that either the city or the restaurant owner would plant a new tree – plant it in a new tree well in line with all the new trees right next to the new curb. Luckily, a new tree was planted. However, and unfortunately, the tree well location was not moved so the tree slalom along Valencia continues.


According to Inside Scoop SF, it is the largest on Valencia Street. With 275 seats in 6,000 square feet on two levels, they'll need lots of customers. Luckily the place looks very attractive, and with entrees ranging from $14 to $19, Amber Dhara is the middle of the price spectrum. Much lower than Range and Farina (or Farina Pizza in all likelihood), but higher than the taquerias and Ali Baba's Cave.

More photos and summary after the break.


With all the new restaurants and businesses opening along Valencia Street, especially where sidewalks were widened, let's hope the community pushes for further sidewalk widening down to 24th Street or Cesar Chavez. Sidewalk widening, in our eyes, must be playing a large role in why so many new restaurants have opened in the block between 18th and 19th streets. 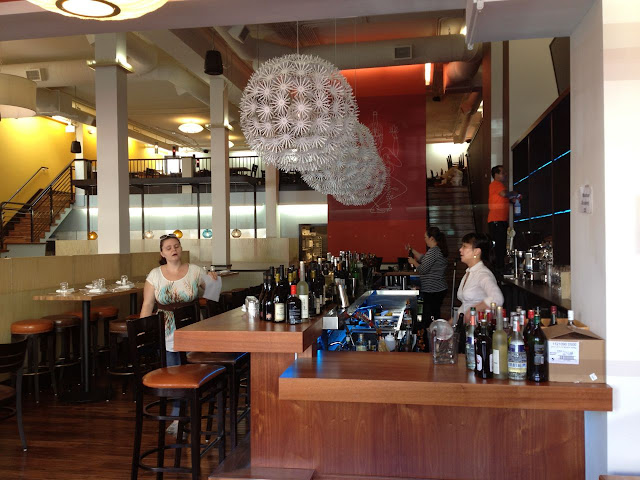