It's hard to believe but Farina Pizza is very nearly ready for showtime. Today we notices the construction wall (fencing? advertising billboard that's periodically painted over?) was pulled down. And behold we finally get a look at what this long awaited pizzeria will look like.

The restaurant was confirmed to be a Farina spinoff back in 2010 by SF Eater. More recently, the name of Farina Pizza & Cucina Italiana was announced with a projected June 2012 opening. Let's hope they're ready to open by August or September, in time for a balmy San Francisco Indian summer. If there's one thing we've learned, getting a restaurant set up takes a long time, and opening date is normally 3-12 months later than expected.

We notice the white theme of domed tiles (a la BART) goes beyond to hip backed white bar stools, and a ubiquitous white tiled theme, accented with a light faded green woodwork with natural wood accents on the tables and wine racks.

More importantly, what are all those faces on the ceiling? They almost look like illustrations of yearbook photos. Or are they some Italian or Sicilian traditional portrait illustration mosaic. We have no idea.

All we know is that we're happy this place is nearly opening day. The building began construction in early 2009, and was completed circa late 2010. Now we finally get the storefront retail, two years after the building was completed. 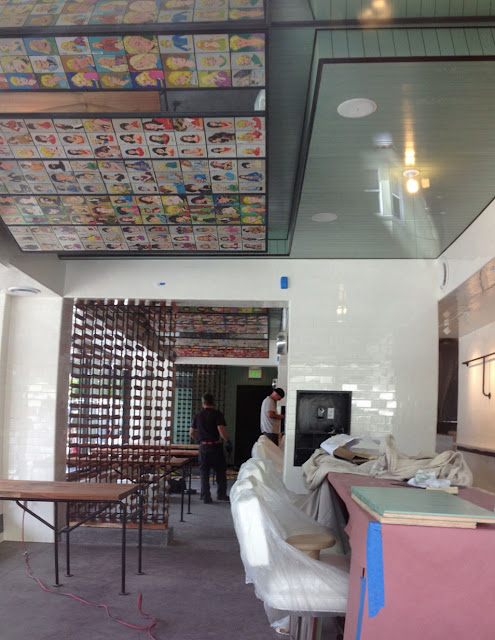 More history and photos after the break:
Below is an image of the room to the south of the corner. Both spaces have bar seating, table seating, and the strange portrait illustrations and mirrors in the ceiling.
The building at the southwest corner of 18th St and Valencia St used to be a used car lot known as World Auto Sales. However it was closed down for several years before construction of the 700 Valencia condominium Based on Dizzy Atmosphere's photo on flickr, it appears this corner was a used car lot for decades... at least from 1979 based on the date of the photo. 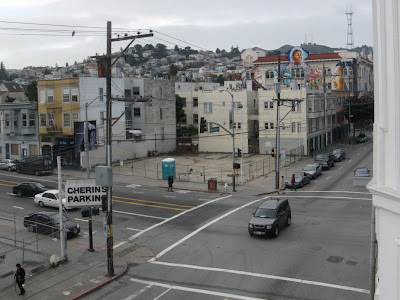 Construction of the building began in earnest throughout 2009.


The door, while under construction was a faded lime green. Looks like it will be a shiny black.