If you had 2 or 3 days in SF, what would be the top 7 must see buildings? The new museums? Old towers? Or a washing machine inspired cathedral. Me thinks the ferries and city halls are missing. 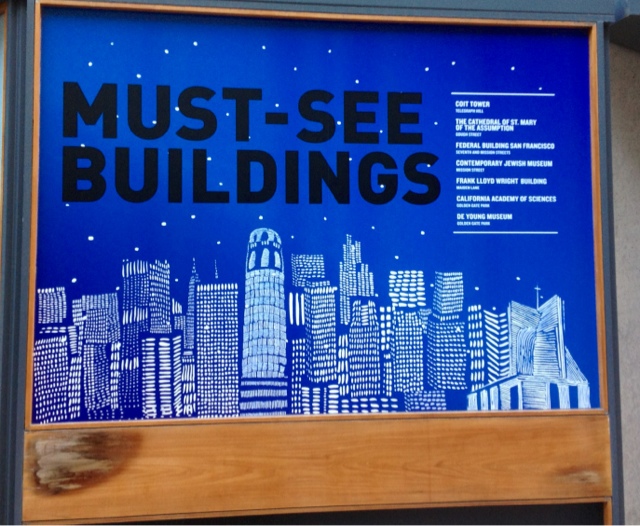 According to the poster below, the must-see buildings listed are:
More thoughts and lists after the break.


The drawing in the image two buildings from the list, but interestingly several not on the list. Coit Tower and the Cathedral of St. Mary are shown prominently. However, we also see a sliver of the Transamerica Pyramid, One Embarcadero Center and what appears to be 505 Montgomery with its distinctive trapezoidal crown.

The image was found on Washington Street in the Financial District, but it has no credit. An image promoting San Francisco Made products appeared next to it.

As noted in the intro we noted that there are several buildings we would consider "must-see" that are not included, while some on the list are less relevant in our eyes. Of course, the "must-see" or "best" buildings or architecture in San Francisco are up to the observer. Below are a few other buildings to consider. Feel free to chime in with your top 7 "must-see" buildings in San Francisco or other cities.

The Financials
The Old U.S. Mint
Bank of Italy Building
The Pacific Exchange

Alas, the it's hard to make a list of only 7 buildings. In summary, we'd adjust the list in the image to the following based on history, architecture, and uniqueness:


Many others have made similar lists. Check out the SF.Curbed list here.