After extensively researching the hills of San Francisco, especially their names and heights, I have updated the San Francisco Topography Map, aka the 2013 San Francisco Hills Map. In addition to featuring more peaks names and elevations than the 2012 map, I have also added some land features and neighborhoods such as Ocean Beach, Cow Hollow and Polk Gulch. The map maintains the topographic lines, showing elevation changes every 25 feet, and has color styling like an old school atlas, changing color every 100 feet.

You can purchase the new 16"x16" map, printed on high quality heavyweight stock paper at Local Take, a great store in the Castro on 17th Street at Castro that opened last spring. The shop is located at 3979 17th Street, just past Little Orphan Andy's, in front of the F-Market streetcar stop. The store predominantly features local artwork including posters, woodwork, and photography, as well as t-shirts, jewelry, pillows, clothing and more. Owner/shopkeepers Kyra and Jenn will make you feel at home.

You can also order the print via Zazzle, but it will be different types of paper.

While researching more physical features, I found that much of San Francisco lacked geographic names before it was a city so I have added some new names that have origins in historic references or refer to today's neighborhood names. You'll notice places such as Sunset Plain in the Sunset, Mission Lowlands in the Mission, and Yerba Buena Fill where Yerba Buena Cove once existed, and is more commonly known as the Financial District – a name that doesn't have much of a geographic ring to it.

Several of the Forgotten Hills have been labeled or have an elevation marker including La Portezuela, and Fort Mason's Black Point.


Note that the new version is more geographically accurate by including Marin, although you don't see much due to the title. Many more peaks have been included. The older version had 29 peaks listed with heights, while the new one has over 50 peaks with elevations included. In addition, several elevation heights have been updated including:
Multiple sources were referred to in determining the heights. Although it's unclear what the exact heights of most hills, many of the elevations and hill names are based on research and work by SF Gazetteer, 47 Hills, and the USGS map of San Francisco available on TopoQuest. 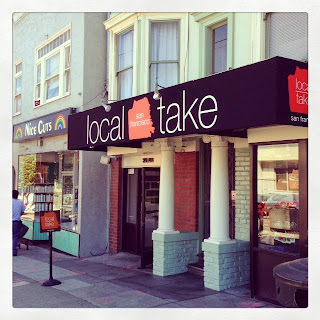 You can also find the street map version (12x12) of the San Francisco Archipelago map at Local Take. A collaboration between myself and Burrito Justice, the map shows what San Francisco would look like if all of the ice caps in the world (Greenland and Antarctica) completely melted. Note that even if this happened, we'd likely be long gone before it happens since that's a lot of ice to melt, and ice takes a while to melt, even if the Earth got to tropical temperatures in areas like North America.
You can easily determine whether you'll be flooded out, have coastline property, or be high and dry.

Areas that are "safe" include much of Bernal Heights, Upper Haight, Laurel Heights, the Inner Sunset, all of Ocean Avenue, and nearly all of the Excelsior neighborhood.
In the near future I hope to set up a way to purchase the posters directly through this web site or through Etsy. I'll keep you posted on this blog post and on Twitter @urbanlifesigns.