Having a Second Transbay Tube is a great and welcome prospect. The tube would bring better access, reliability, and resiliency to Downtown San Francisco's transportation network. In November we learned that BART is actively studying the idea of a second Transbay Tube (see PDF presentation). Several articles and opinion pieces have covered the critical issues of station locations, alignments, cost, funding, environmental issues, etc.

I have to note that the map used to show the basic idea bears an uncanny resemblance to one of the alignments I studied and proposed in my June 2013 piece, "Poll: Where Should BART Go in SoMa?" True, no specific alignment has been selected - and many will be considered an analyzed. However, as you can see in the map, especially the closeup map, the alignment shown follows the Third St/Geary alignment that I considered back in 2013 for my "Poll: Where should BART go in SoMa?" piece.
Even Mayor Ed Lee has come out supporting a Second Transbay Tube, in his "Shared Prosperity: Affordability Directives" document, which is very encouraging. The Mayor said, "We will begin a regional conversation with my fellow Mayors in the East Bay, Supervisor Scott Wiener, and the BART Board about a second BART tube from Mission Bay to the East Bay." (emphasis added).

Likewise, according to Streetsblog, the new Oakland mayor, Libby Schaaf is on board for a second tube saying, "It will not be cheap… I think it will really reduce congestion. I hella love Oakland, but we do need to think regionally, and it would make a lot of sense for the region.” Even Alameda is on board for a new tube the Public Works Director, Bob Haun, saying he is ready to work with BART on placing a station on the island.

I have my own thoughts on whether a Second Transbay Tube should go through Mission Bay, but let's set that aside for a later discussion. What's interesting is that the 3rd St/Geary alignment (or 3rd St/Union Square alignment as I originally called it) is the rough alignment shown on the map - and it passes through Mission Bay, with a probable stop at Third St and King. Mayor Lee calling out Mission Bay seems to show that he thinks it's important that whatever alignment is chosen should go through there. I wonder if he's considered the capacity constraints of Embarcadero and Montgomery, and that a second tube would do well to help alleviate some of that constraint and also connect to the Transbay Center.

Although I think it's fascinating that these BART maps show an alignment I have seen nowhere else other than my map from 2013, it doesn't necessarily mean that BART's planners got the idea from me. When I was studying possible Second Transbay Tube alignments and paths through SoMa, I tried alignments that followed most streets in SoMa; either east-west or north-south. BART planners may have done the same, or they may have just referenced my map.

What's more important is that it seems that BART is exploring many possibilities - not just trying to go to the Transbay Center, or going down Geary to Ocean Beach, but also studying alignments that go to Mission Bay, and to the Sunset District. 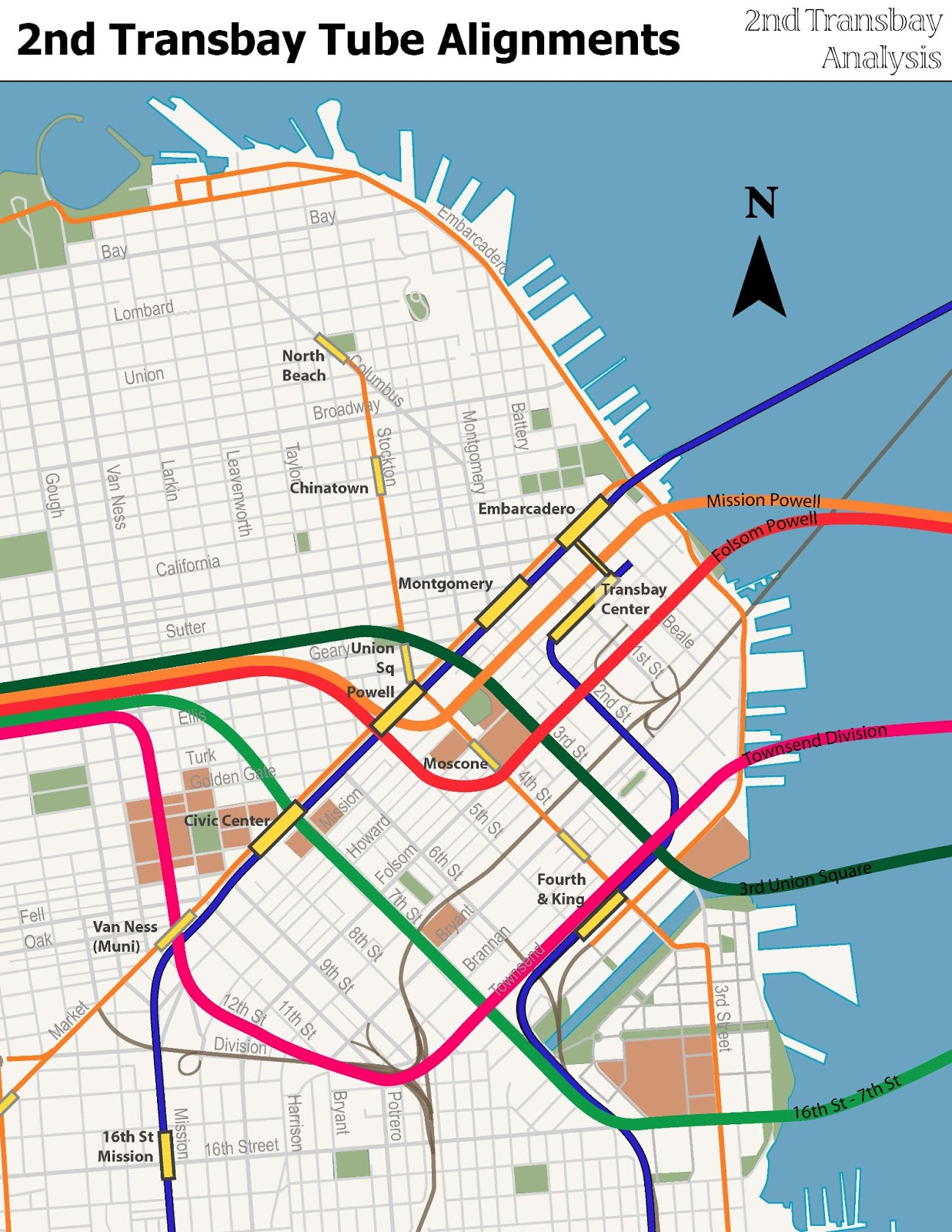 The poll I conducted sadly did not include the Third St/Geary alignment as a choice. Only the Mission/Powell, Folsom/Powell, Townsend/Division, and the 16th St/7th St alignments were offered.

The results of that poll found that the Folsom St/Powell and Townsend/King St alignments were preferred equally - at 32% each meaning 64% favored the two alignments that have been talked about the most.

In an effort to reexamine the alignments for a new Transbay Tube, all of which eventually head west on Geary, a new poll has been created that includes the Third Street/Geary alignment, some other previously studied alignments, and a couple new ones:

Please vote in the new poll I just added. See at the top of the blog (on a computer). If you're on a mobile device you'll have to switch to the web version to see the poll and vote in it.

Below are the list of routes with possible station locations and transfer points.

This route works if there's 25 feet of sea level. Mission Bay and the northeast portion of the Mission District would be a shallow bay.