Oakland: Sometimes the most ambitious plan is the most practical - looking at 980 option

I started this series of Downtown Oakland Rail scenarios for a very explicit reason. Find out if and how any other cocktail of rail alignments for a Second Transbay Crossing and HSR to and through Oakland might equal or show a strong alternative to ConnectOAKLAND's plan of running a new trainline down the I-980 corridor. After looking at alternatives for an east-west BART line down 14th St, and a north-south line on the Lake Merritt side of Broadway, we look at the east side of Downtown - the ConnectOAKLAND vision for BART and regional rail/HSR to run along the 980 corridor.

Full disclosure, I am a founding member of ConnectOAKLAND. I am an advocate for the ConnectOAKLAND 980 alignment. However, I and the folks at ConnectOAKLAND believe that all alignments should be considered for their pros and cons (cost/benefit, people it serves, opportunities, future riders, construction costs and disruption, etc.). This series of posts is my way of looking at the many alternatives and a way to find out what could make the most practical and implementable rail system for Downtown Oakland, its surrounding neighborhoods while greatly benefiting the region.

Admittedly, you may have seen some of this alignment before if you're familiar with the ConnectOAKLAND vision. I have thrown in a few minor new items to make it interesting. I've called this option the Jefferson Square 980 option, as the park is one block away from 980 and would benefit from removal of the swooping overhead connector ramps.

If I haven't said it before, the primary reason to look at these alignments, whether in Oakland or San Francisco, is to address the need for a 2nd Transbay Rail Crossing which would improve and make the Bay Area a better place for many reasons:
As mentioned before, I've only slightly reoriented the maps with Broadway pointing "north and south" rather than its actual northeast/southwest axis. 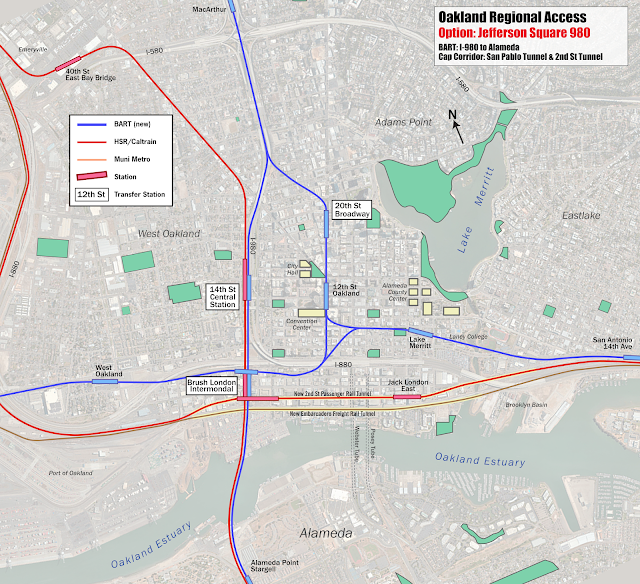 The hallmark of this alignment is that it brings both BART and Regional Rail into the same station - the 14th Street Central Station. With trains from different services side-by-side to allow easy transfers, it will become a great hub that can allow these cross-platform transfers between BART and Caltrain or Capitol Corridor, just like BART trains due today at MacArthur and 19th St stations. In addition, the alignment, within walking distance of the current Broadway corridor, can stitch West Oakland and Downtown Oakland together by removing the existing 500+ foot wide freeway, replacing it with a transit tunnel that carries more people than the freeway ever will, and still provides a roadway link between Highway 24 to I-880 via a new boulevard.

Simultaneously, any new development here beyond the rail elements would allow for much housing, services, institutional and employment centers on state or city owned land - meaning the city could decide whether it's all housing and at what price points, or a mix of low, medium and market rate housing plus some educational institutions or something else. In addition, any great change needs to take into consideration how the nearby neighborhoods, here West Oakland and Jack London, might be negatively affected by this project. Any plan should include ways of preventing displacement of existing residents and homeowners. 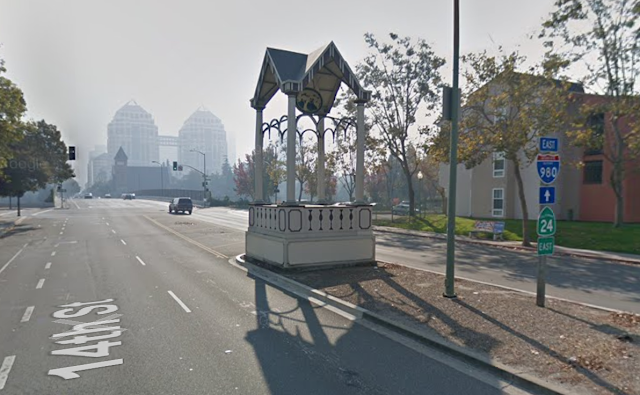 The BASIC ALIGNMENTS
(see map above)
* The rail tracks through Downtown Oakland from MacArthur Station to West Oakland and to Lake Merritt Station are known as the K-Line. North to 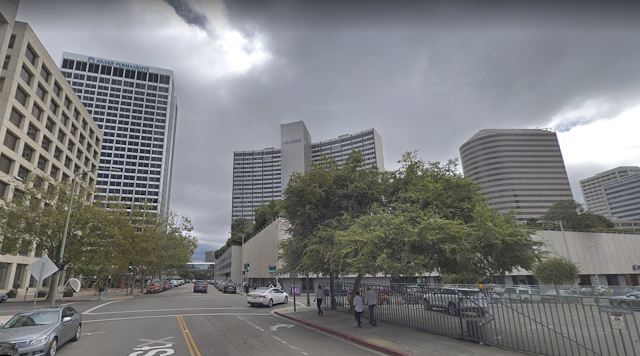 The Cons
The Pros
Phasing
Phasing of this grand plan of BART and regional rail service means that certain parts could be built sooner than others while still be functional, and not needing to find so much funding all at once to build. 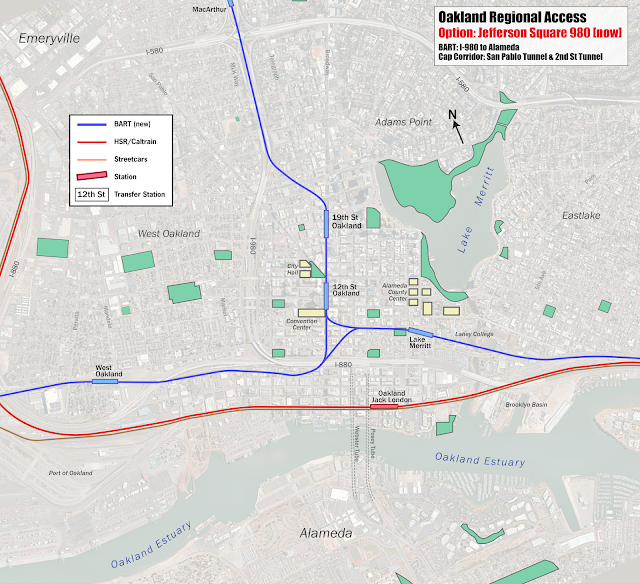 The option could be phased in a number of ways:
First Phase A 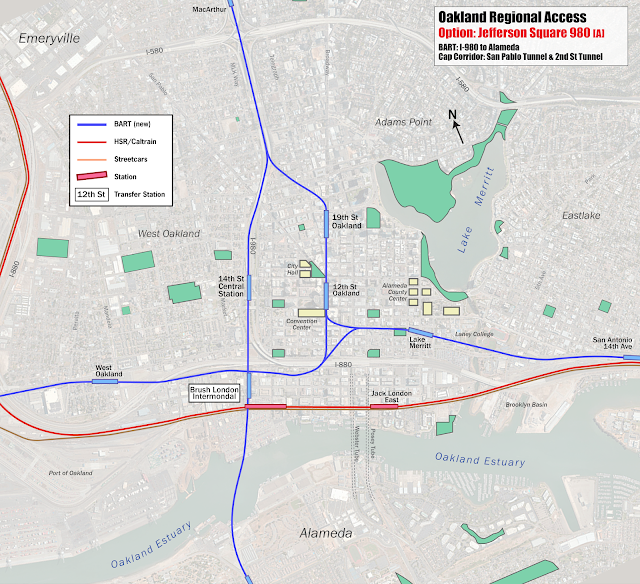 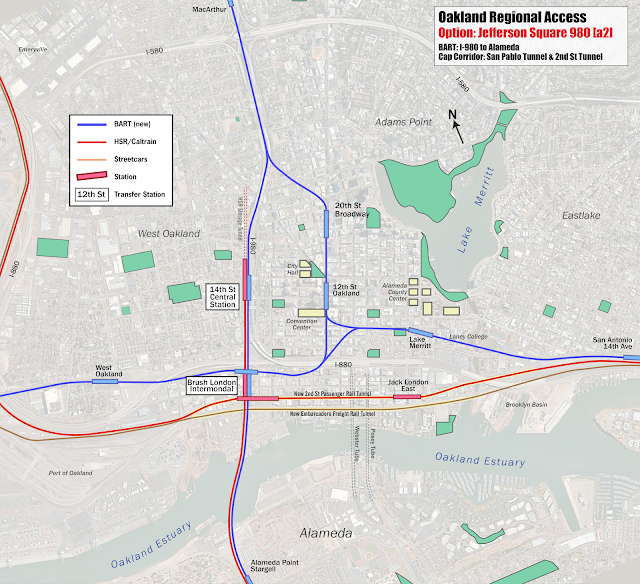 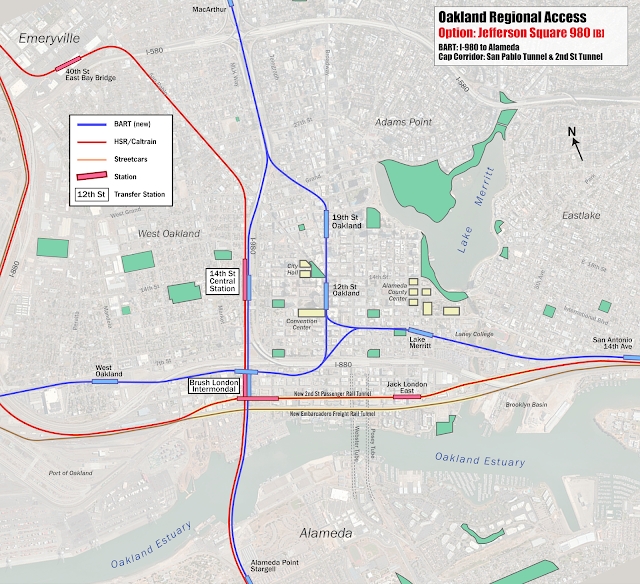 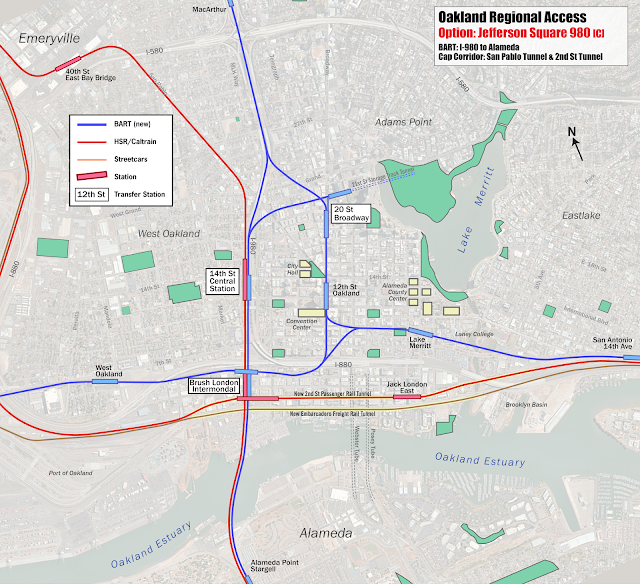 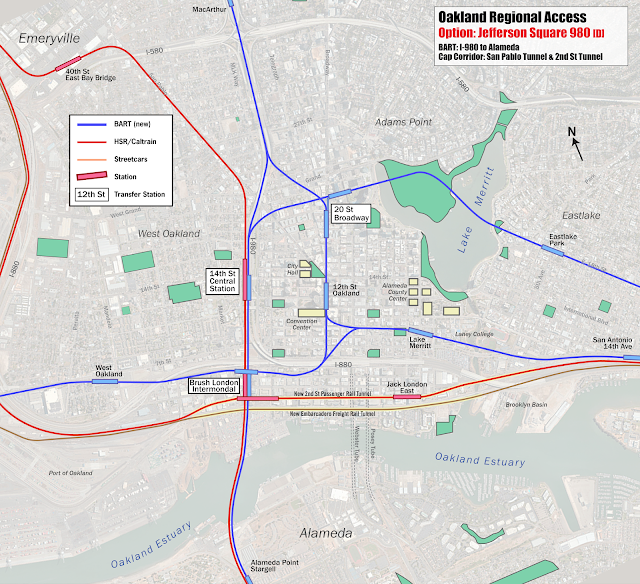 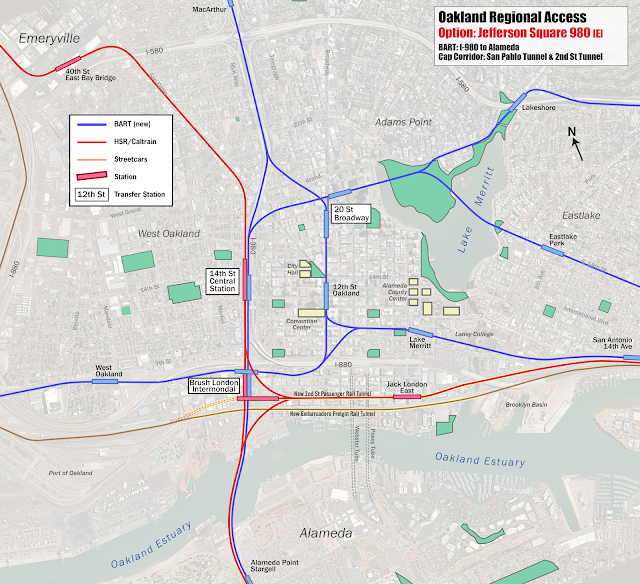