Urban Life Signs returns to Transbay Crossing alignment and station analysis. For the first time in a long time, we look at Oakland. (The last time we looked at alignments was back in mid 2016 and 2015)

Talk of a 2nd Transbay Rail Crossing has continued to be part of the transportation conversation for over a year:

This time around I'll be looking at where they trains could go, the tradeoffs, the opportunities, the challenges, and the timing for Oakland– not my usual San Francisco analysis (1, 2, 3). Just like earlier this year, I'll be looking at different options independently.  For Oakland, I'll be calling the alignments by park or open-space names. Because I'll be showing both BART and Capitol Corridor/ Amtrak/ Caltrain/HSR, creating names by major streets would get really long and confusing.

Full disclosure, I am a founding member of ConnectOAKLAND. The group advocates for a particular alignment for future rail in Oakland. I am an advocate for the ConnectOAKLAND 980 alignment. However, I believe that all alignments should be considered for their pros and cons (cost/benefit, people it serves, future riders, construction costs and disruption, etc.). This series of posts is my way of looking at the many alternatives.

I've only slightly reoriented the maps with Broadway pointing "north and south" rather than its actual northeast/southwest axis.

Today we're looking at what a Jackson Street alignment through Lake Merritt Station might look like. We're calling this the Snow Park alignment seeing that it goes under Snow Park near the shores of Lake Merritt. I chose this alignment, the BART alignment, in part, to show where a line parallel to BART's Broadway line might go that is in the "Goldilocks" distance from another line, which is 0.3 to 0.5 miles away. Jackson Street is in the middle of this zone being 0.36 miles away from the 12th St/Oakland City Center Station.


The BASIC ALIGNMENTS
(see map at beginning of post) 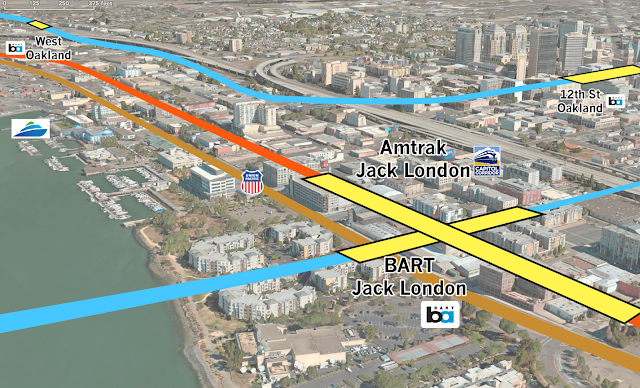 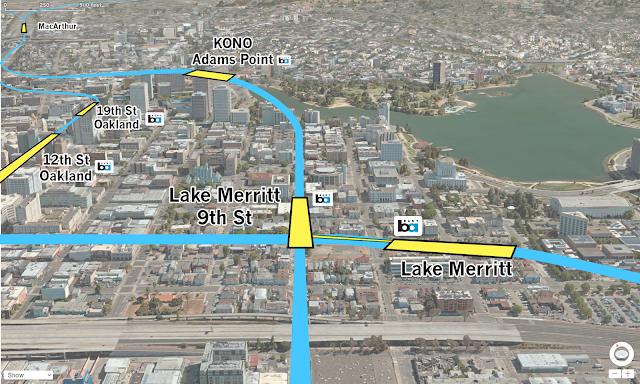 Phasing
The two main alignments could be built at separate times (First BART, second Amtrak or visa versa). Possible phasing could also have the Oakland and Alameda tunnels built before the 2nd Transbay Crossing is built. However, this would create a stub line until the transbay service began.