Back in the summer of 1846, several years before gold was discovered in California, John C. Frémont named the strait connecting the Pacific Ocean and San Francisco Bay. He titled it the "Golden Gate" or "Chrysopylae". In his memoirs he said:

"To this Gate I gave the name of "Chrysopylae", or "Golden Gate"; for the same reasons that the harbor of Byzantium was called Chrysoceras, or Golden Horn."

(See how Hong Kong and Vancouver match up over their futuristic skylines and cultural connections.)


Byzantium was really Constantinople, and is now modern day Istanbul. Although each city have very different cultures and are half a world away from each other, maybe they are not so different or hold some key similarities. Were these two great "Golden" straits and corresponding harbors really that similar, or was it simply Frémont's 19th Century boosterism to promote the barely existent town of San Francisco that links these two cities? Finally, what were the "same reasons" that these harbors were termed "Golden"?

Thankfully Fremont gave it this name. Previously, the Spanish had a mouthful of a name: “Boca del Puerto de San Francisco” or "Mouth of the Port of San Francisco".

The last question is easily answered when the full text is found to state:

"Between these points is the strait about one mile broad in its narrowest part, and five miles long from the sea to the bay. To this gate I gave the name of Chrysopylae, or Golden Gate; for the same reasons that the harbor of Byzantium (Constantinople afterwards) was called Chrysoceras, or Golden Horn. The form of the harbor and its advantages for commerce, and that before it became an entrepot of eastern commerce, suggested the name to the Greek founders of Byzantium. The form of the entrance into the bay of San Francisco, and its advantages for commerce, Asiatic inclusive, suggested to me the name which I gave to this entrance, and which I put upon the map that accompanied a geographical memoir addressed to the senate of the United States, in June, 1848."

In short, Frémont found that both harbors had narrow entrances, were great ports, and had "advantages for commerce" with links to Asia.

Over 150 years have passed since 1846 and both cities have grown considerably since 1846.  Has San Francisco had time to "catch up" with Istanbul and its long 1700 year history to become a great "entrepot of eastern commerce"?

Firstly we'll look at the geography, and then later to the cities and their built form.

Istanbul Harbor and the Golden Horn
Note the the Golden Horn is the inlet separating the central Istanbul's historic and business districts. The Bosphorus is the major strait linking the Black Sea to the Sea of Marmara. The two red bridges are the Bosphorus Bridge (to the south), and the Fatih Sultan Mehmet Bridge to the north. [A third bridge, the Sultan Selim Bridge, with for autos and trains is being built over the Bosphorus (aka Bosporus) at the top edge of the map shown below. See an image added at the end of the post. 2015 December 15] 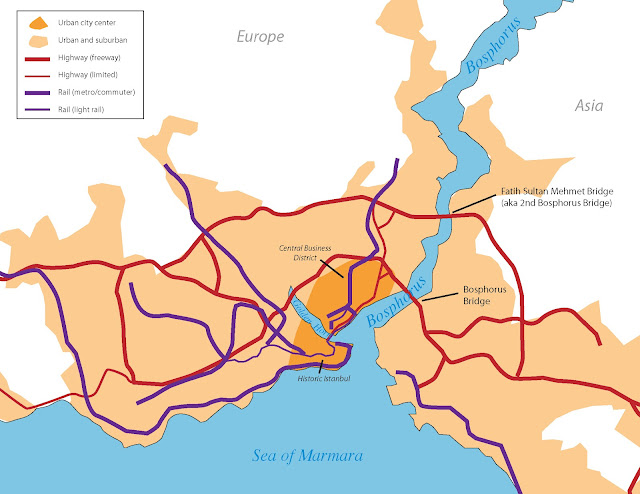 San Francisco Harbor and the Golden Gate
Note the distances between San Francisco and Marin and to the East Bay. The Golden Gate Bridge is the the left center, while the Bay Bridge in the center is split into two parts. 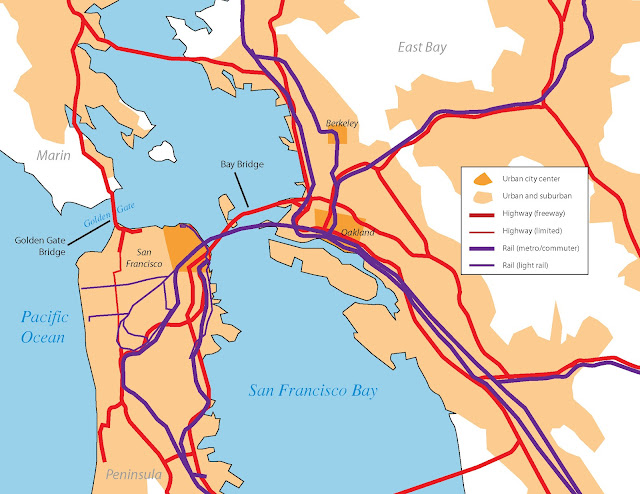 Although the cities do have similar topography, Istanbul's Bosphorus connecting two seas is actually quite a bit longer than the Golden Gate; nearly 20 miles long compared to the Golden Gate's 2 miles. In fact, the Bosphorus (also known as the Bosporus or Boğaziçi in Turkish.) in its width and length is much more like the Hudson River Valley in New York State combined with a Straits of Gibraltar. It's approximately the same width as the Hudson, with steep hills and mountains along it, but it also links the Black Sea to the Sea of Marmara.

What about the two "Goldens"? Although the Golden Horn is where the bustling port started, geographically it is a flooded estuary that is only 750 meters wide at its widest point. The Golden Gate is much more dramatic, despite wrecking more ships than harboring them.

In fact it is the Bosphorus and the Golden Gate that are more analogous to each other. Yes the Golden Gate is much shorter in length, but the two are both dramatic water passages with steep slopes and cliffs falling to their banks. In addition, the landward sides of both places have very similar topographies. When we looked across the Bosphorus from Topkapi Palace on the tip of historic Istanbul, we couldn't avoid the similarities of seeing a large container port with a hilly backdrop; very much like that of Oakland and the Oakland Hills.

The two cities, even in spite of historical and cultural differences have many similar features.


For a simple photographic comparison, they're not so very different.  They both have the following lots of water and a distinctive tower.

Apart from cultural differences, the cities are quite different sizes (7 million in the Bay Area vs. 12 million in Istanbul). In addition, Istanbul is a much denser city. That said, both cities do not have as robust a transit system as one might imagine for a city their size. Although the Bay Area has BART, Caltrain and Muni Metro, much of its region is underserved by high capacity transit. Likewise, Istanbul has little, however it's catching up and about to surpass San Francisco.  Currently Istanbul recently completed is building its first rail link across, or rather, under the Bosphorus with a high speed rail tube known as the Marmaray. In addition, they are extending their metro line into the heart of the historic part of the city, which is popular with tourists and close to the University. Due to the historic elements, some elements have been controversial including a new bridge across the iconic Golden Horn, and the massive site for the new major rail station where the original Constantine's wall was discovered and the station had to be relocated.

Lastly, the two cities have great public spaces, retail districts, and are major tourist destinations. The two areas we would call out are parks and pedestrian streets. Istanbul has a dearth of parks for such a large and dense city. There's no need to have the number of, say Paris, or London, but many more would benefit the citizens. San Francisco, with Golden Gate Park, Crissy Field, and Dolores Park, to name a few, could use a few more parks, but is in much better shape than Istanbul.

Regarding pedestrian streets, Istanbul takes the cake from San Francisco. Istiklal Caddesi is pulsating with life. The combination of shops, historic streetcar down the middle, and the immense number of shoppers past midnight has no comparison in San Francisco. If San Francisco were to pedestrianize Powell Street up to Post, or somewhere with a dense shopping district and nightlife, we would measure up.