New York City, that grand great city. One of the best harbor cities and one of the great skyline cities. New York also has one of the great urban transportation systems. To our delight, the New York City Municipal Archive has released nearly a million images from its collection. Thanks to the tip off from The Atlantic In Focus piece on the release.

We took particular notice of a 1938 shot from Brooklyn's Smith-Ninth Street subway station with the Lower Manhattan skyline in the background. The view from the highest elevated subway bridge in New York is fantastic. So much so, that many people have taken shots from it, including SF Cityscape's Steve Boland, back in April 2008.


Putting two and two together, it became obvious these two shots could be compared. Although Shanghai's comparisons were only 20 years apart, a 70 year comparison is just as fascinating and thought provoking. Below you can see the fruits of some time spent using Photoshop. Click the images to enlarge them.


The archives photos are available online, but have proved so popular the Archive web site is shut down with this notice:

Due to overwhelming demand, the New York City Municipal Archives Online Gallery is unavailable at present. Maintenance activities are underway to address this issue.


The caption of the 1938 photo reads: "A Subway Road Comes up for air in Brooklyn -- in background, a view of Manhattan from subway elevated tracks, 8th Street, Brooklyn, New York, on March 21, 1938." Boland's shot shows that after 70 years, much has an hasn't changed.  Sure there's the obvious skyline change, but subway trains run on the same tracks, and the two churches in on the left still exist. The near church, just left of the train, has lost its steeple in the intervening years.


For a more equal comparison, see the two shots in black and white. This comparison shows that, although both shots are taken around the same time of the year, one is from the morning and one from the afternoon since all of the shadows are flipped.
How about a split comparison.
Finally, the original images with less cropping. In the 1938 shot we see more tracks, while Boland's panoramic shot shows the Downtown Brooklyn skyline (right), and pieces of the newer Jersey City Skyline (left). 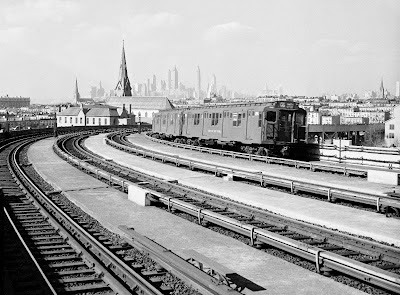