Playground with a View (and need of stroller valet)

Seeing that Saturday was rainy and overcast, we decided to check out the new Hellen Diller Playground on Sunday. Even though it wasn't opening day, it was still opening weekend, and there were a "bazillion" people there. The new playground in Dolores Park appears to be a true success, at least for now. The kids were everywhere, the parents were everywhere, and the strollers needed a parking valet. More on that later. 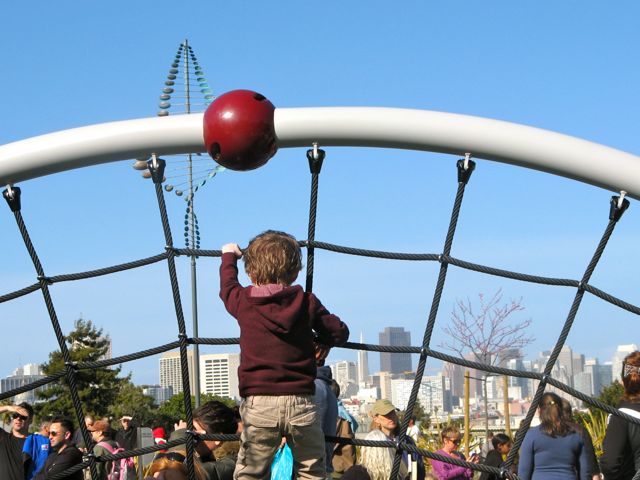 Firstly, if you approach the park climbing up Dolores Street, there is a wide and welcoming entrance walkway. The grass all along Dolores, but especially after the 19th St Liberty Bell, has been re-sodded several feet from the sidewalk into the park (see photo below). Nice touch. (was this funded by the playground?) 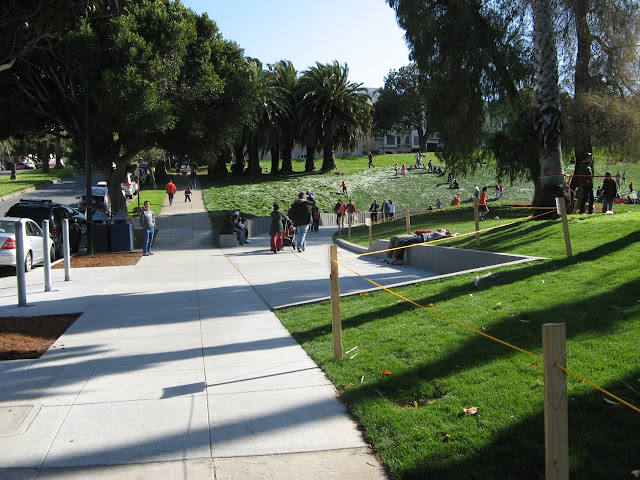 As you approach the playground, dozens of kids were rolling down the slope (in photo above behind the curving walkway). I wonder how long the grass can hold up to that. Maybe with the kids rolling on Saturdays and Sundays en masse but not much in the week, will give the grass time to recuperate.

Just before you enter the playground proper you are first greeted by a wooden bulletin board... with a no dog pooping pictogram - dead center. Maybe when notices go up, we won't notice the no pooping pictogram. Although, I hope that doesn't mean more pooping. Immediately beside this is the official playground name: "Hellen Diller Playground at Mission Dolores Park." 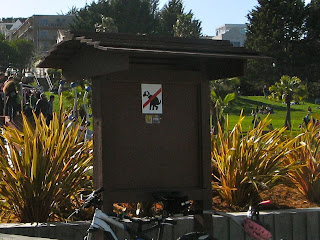 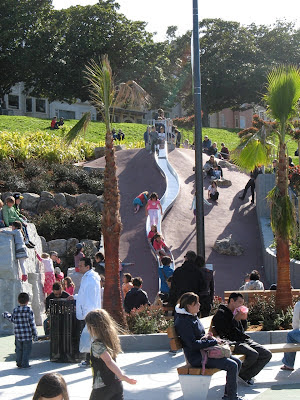 Upon entering, you are enveloped in an expansive bevy of playground equipment and joy that one is reminded of the colorful wonder, joy, and amazement when we discover Munchkinland in The Wizard of Oz.

A few elements of note are the swing set with plenty of swings. I thought swings were falling out of fashion, whether for maintenance or liability issues (I can't imagine more kids get hurt than before - we just might have more lawsuits).

A wiggling slide up above the main playground area dominates many views. With it's fantastic length and two wiggles's it's great to see. However when we snapped a photo there was a log jam on the slide, and when parents joined their children, it was a slow way down seeing that the slide is quite narrow - i.e. child size.

Sadly there were no spiral slides or monkey bars. The Yerba Buena Garden playground can have its spiral slide. Monkey Bars, sadly, may soon only be found in "old" playgrounds where cities don't have the money to create "safer - liability proof" playgrounds. 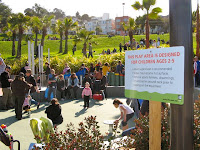 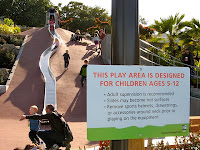 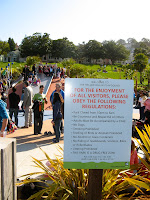 As mentioned in the San Francisco Chronicle, the playground has been designed with several "rooms": one for pre-schoolers, one for older children, and a sand play area for all ages. Something tells me the sand will be more frequented by pre-schoolers, unless sand castle equipment and a little water are available. Preschoolers get the 2-5 years area, and the "schoolers" get the 5-12 area, although I didn't see many kids over age 8 there. Is that a sign that 10 year olds don't play in playgrounds, the equipment isn't suited for them, or that all the 10-year olds have moved to other counties?

Peppered throughout the playground are several play area designations and the omnipresent "ADULTS MUST BE ACCOMPANIED BY CHILD". Sure it starts with "Welcome to the Hellen Diller Playground", but message seems a bit ironic, king of the opposite of the R ratings for movies "Under 17 requires an accompanying parent or adult guardian." The bottom of the sign refers to Park Code 3.02. Upon further investigation, the code makes no reference to children or adults, but is a catchall code of the San Francisco Park Code:

The code is basically saying that you must obey whatever is written on the sign, i.e. don't enter the playground without a kid, unless you didn't see the sign and walked in without a kid (aka not willfully disobeying).

Below it appears that the two kids are in compliance, as they are children and there is no regulation stating a child must be accompanied by adults. Kind of the opposite of the R rating for movies. The two kids in the background are actually off-roading from the playground and balancing along the bolder retaining wall. Watch out kids below, there may be 10-12 year olds here! 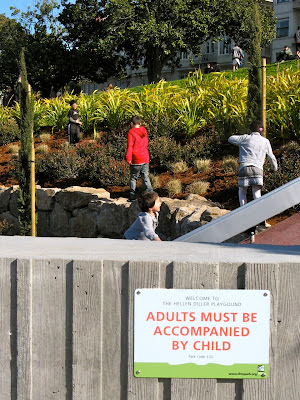 There was a great buzz and energy to the place. The views to Downtown San Francisco were amazing. So great, that the playground enhanced them by situating the big bridge so it points to the Transamerica Pyramid. We look forward to bringing our own children to the park some day. Hopefully weekdays will be a little less crowded.

We could only find one challenge with the park (apart from the onslaught of signage); the place needs parking - as in stroller parking. There were strollers everywhere! Most were empty too, without a parent nearby. The solution, a stroller valet. Yes, you heard it here first. A stroller valet would provide a great service to playground users, offer a little revenue to Recreation and Park, and provide "eyes on the playground." 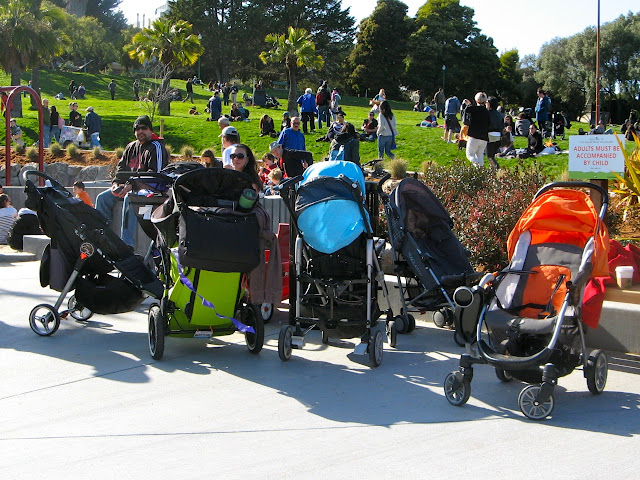