Take part in the redesign of one of the Mission's most blighted yet promising street blocks. Tomorrow the San Francisco Planning Department will be presenting its "Final Design" of Mercado Plaza at Bartlett Street. This is where the Bartlett Street Farmer's Market happens. Here's your chance to see what's happening so you don't get "surprised" by the changes that you will "love", "hate", or "don't really care either way".

First an announcement, then a review of the Mercado Plaza Plan for Bartlett Street.

Bartlett Mercado Plaza Open House
View the final design for the redesign of Bartlett Street, which includes a flexible public space to support the farmers market, other public gatherings and for its everyday design.

The Women’s Building
AUDRE LORDE ROOM
3543 18th Street (between Valencia and Guerrero)
San Francisco, CA 94110
The Mission is a vibrant, warm weathered, multi-cultural neighborhood that has a lot of nice streets and areas. However, one block in particular leaves a lot to be desired. Bartlett Street between 22nd and 21st Streets is an extra wide street with horrible street vibe, especially with the parking garages stark wall on its west side. Luckily the Mission Community Market, also known as the Bartlett Street Farmers Market has brightened up not just the street but the neighborhood every Thursday since 2010.

Building on the market's success and a real need to improve the street, the San Francisco Planning Department has embarked on the Mercado Plaza Plan to redesign the street to make it better for the market, for other new events, and on a regular day or evening.

The question is whether the new design will create a more inviting and better street on non-market and non-event days. In addition, will the curb-to-curb street width be narrowed enough to slow traffic or will other non-pedestrian oriented departments prevail with one-size fits all of the state street width (read suburban wide street designed for maximum fire department control) that could in fact increase traffic risks, especially to pedestrians.

Current State
Bartlett Street is an extra wide street anomaly with angled parking on the left side and parallel parking on the right. The Bartlett Street Parking Garage forms a virtually blank street wall to the left, with the barely visible Casa de la Raza Housing Complex above the garage. The other side of the street is mostly made up of the backs of Mission Street buildings with little life apart from the SF Buddhist Center and a janitor supply shop.

Bartlett Street south of 22nd, where homes and schools border the street is only about 30 feet wide curb-to-curb, while north of 22nd it is a whopping 44 feet wide (50% wider!). Most of the extra width is given to the angled parking on the west side. Parallel parking makes up the east side. All parking is metered. A very generous single one-way lane makes up the middle.


Since 2010, the Mission Community Market has been inviting the community to its food vendors, but also other local businesses and also after-school programs. It now runs nearly yearlong. Unfortunately most of the time, all week long, apart from Thursday evenings, the street is pretty lifeless apart from some folks drinking beer or doing drugs in the daytime and acting as a giant surface lot.


Mercado Plaza Design
The new plaza and street redesign is being made to improve the streetscape and encourage public events beyond the Mission Community Market. 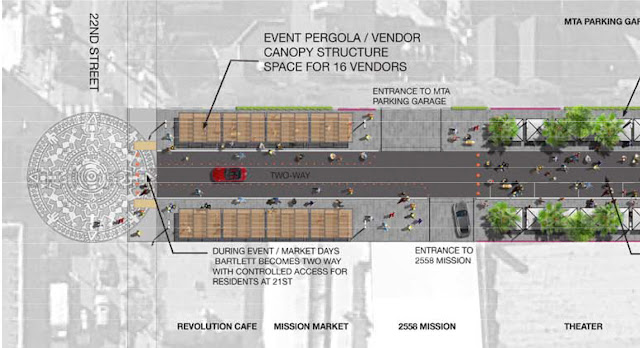 Physical Features
Sidewalks would be widened with the street correspondingly being narrowed. The additional sidewalk space would create a more inviting pedestrian experience, especially with added trees and bulbouts at corners. Several permanent canopies/pergolas would be installed near 22nd Street to help shelter some market vendors. Moveable seating is also being considered and would be stored off-site. Bike parking would also be included. Several murals are designated on the parking structure walls.


per•go•la |ˈpərgələ|
noun
an archway in a garden or park consisting of a framework covered with trained climbing or trailing plants. 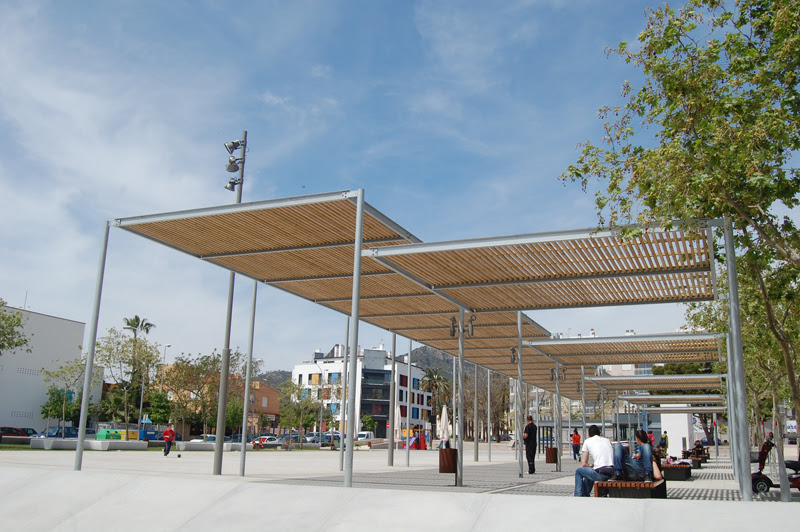 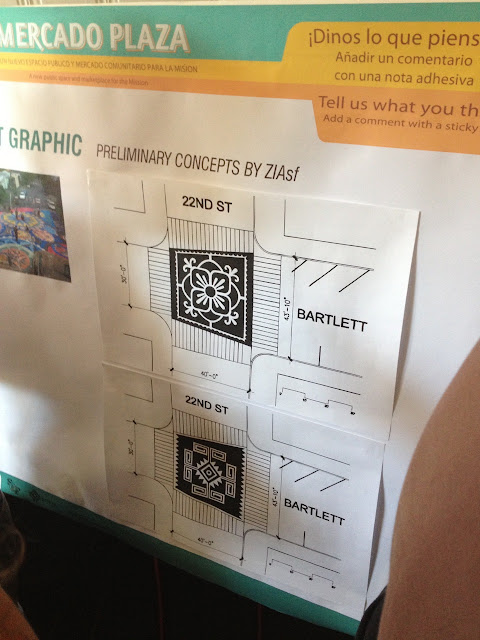 Program Features
Program features include pilot projects such as a street stage (funded by Pavement to Parks), which could hold events from groups like the Mission Cultural Center for Latino Arts, Edison Academy, the dance event "Abada Capeira", and Rock the Bike. Food access and the health benefits of the plaza were also emphasized at the meeting.

Meeting Highlights
Overall the crowded room gave a positive reception to the design and program proposals. Some comments were voice over concerns that too much parking was being removed that would detrimentally affect local residents. In addition I spoke to one person who said that the funds for the project were coming out of the voter approved funding for repaving streets. She felt that funds should go towards the many streets that still needed repaving and that if the funds went to Mercado Plaza it was going beyond what the original bond was approved for. I did mention that the street would be repaved for this project. 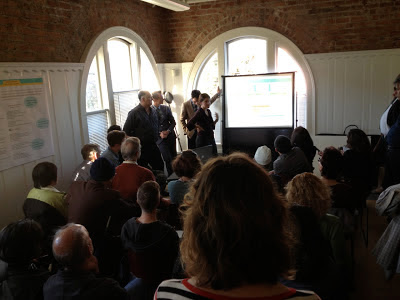 The width of the new street has not been finalized. Based on the initial design drawings (see above) a 27-foot roadway allows for parallel parking on one side, one lane of traffic, and a row of angled parking. That would leave about a 12 foot traffic lane. However, the SF Fire Department follows the California Fire Code which calls for 20 feet of clear roadway at all times.

Note though, many streets in San Francisco and across the state do not have 20 feet of clear roadway, but you don't see removal of parking or takings of property to ensure this width. The reason for this clearance is to allow two fire engines to stand side-by-side in the event of a fire, and allow for passage of fire vehicles with one parked. Although fire is a serious risk in San Francisco with its thousands of wood buildings and high winds, it has also been shown that wider streets are less safe. We need to balance the risks of a fire with other risks of pedestrian safety and community needs.

Supervisor Wiener recently succeeded in changing the requirements for the San Francisco Fire Department, and now has the definition of the "clear area" as including unobstructed sidewalk space. Fire engines can easily clear sidewalk curbs, so this makes good sense.

My primary concern is that although the new street design will be great for the market and when other events are held, I'm not so sure that the daily life experience will improve that much. This may be due to the simple fact that the street walls (parking garage wall on one side, and backs of buildings on the other) are not inviting and won't change with the new design apart from a few new murals.