Poll: Where should BART go in SoMa?

Talk of building a second Transbay Tube must have started the day BART opened the "First" Transbay Tube in 1974. Now with BART's escalating ridership and the construction of the Transbay Transit Center, talk of a second tube under the bay has begun - at least in some circles.

So where should a Second Transbay Tube go once it arrives in San Francisco? The general dialogue, from both BART (with option 1 and option 2) and SPUR, has focused on bringing it into the South of Market neighborhood. Other dialogue has focused more on connection to the Transbay Terminal, which is important, but not specifically what we're discussing in this post. But where exactly should it go? Many different needs and potential opportunities arise with aligning a new rail line. I've created a poll to get feedback from you the readers, to see where you think a new BART line should go.

Note the Poll is NOW CLOSED. To see the results, read my post, "Evenly Split..."

Please cast your votes on the ballot in the column to the right, near the top of the web page.
Note that the poll can only be accessed from a computer or by the full web page on a mobile device. It's not accessible through the mobile version of the web site. Please make your voice heard in comments. Also, please excuse the misspelling of the word "further". I've tried to edit the word, but Blogger won't let me even edit the question since people have begun to vote in the poll. If you're a fan of the 3rd Street Union Sq alignment, please say so in comments.

The map below shows the basic alignments: Essentially from San Francisco Bay (south of the existing Transbay Tube) and eventually through to Geary Street at Van Ness.

I've added a second map showing other alignments mentioned in comments or on Twitter, plus the Folsom Van Ness alignment presented by BART several years ago. You can see them in the same map form at the end of the post, after the break. 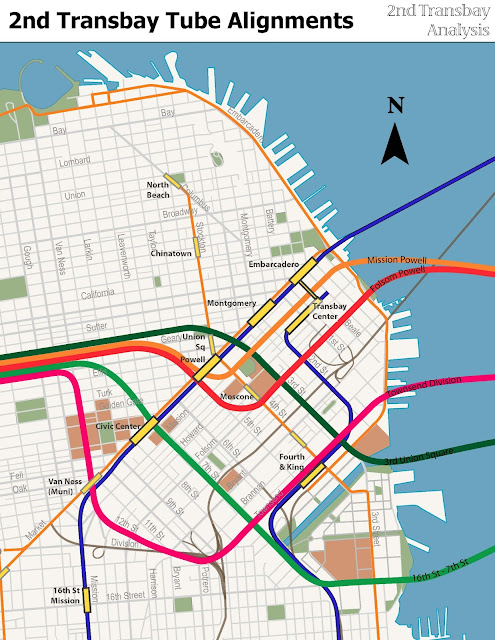 The choices are (from north to south):

Of course there are really dozens of alignments that could be considered. However, here you have five basic ones that pass through or by SoMa, and connect with existing BART, or Muni Metro, or Caltrain or some combination of the three. I make no specific designations of where stations should be located, or whether BART should have a standard gauge track or the special BART gauge track on the existing BART system. All of these routes could also have a separate set of tracks connect to the Transbay Transit Center and the Caltrain Downtown Extension.

Finally, when considering these routes, consider how well they do the following:


I'm sure there are other elements to consider but those are the primary ones that come to mind. Feel free to add your own important considerations in the comments section.

An upcoming piece will examine how we must plan for a second tube and the Caltrain Downtown Extension (DTX) in concert so that we have the best regional rail and local rail system serving Downtown San Francisco and other neighborhoods of the city. For now this poll will look primarily at how a new BART line could access SoMa and/or Mission Bay and on to Geary Street.

Below is a map showing other alignments not previously mentioned. They came up via comments. Below is a list of the lines. These are not included in the poll so your head wouldn't turn to mush from 10 choices. 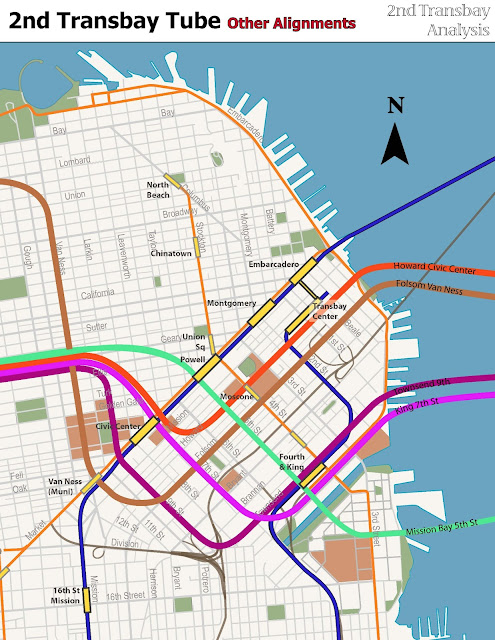