The Geography of Taksim Square

You may have heard in the news over the past few weeks that protests against the government are going on in Turkey. They began and continue at Taksim Square in Istanbul and have spread to other large cities like Ankara and Izmir. Taksim Square is the major urban square of Istanbul, much like San Francisco’s Union Square. Beside it lies Gezi Park, one of the rare pieces of green parkland in Istanbul, a city of 12 million+ citizens.
The protests began with a small group defending the park from bulldozers that would tear up the park and eventually replace it with a shopping mall and cultural center. Due to the outsized police response with tear gas and force, the protest has blossomed into more of a political revolt by Turkey’s urban secularists against the culturally conservative Prime Minister Erogan (ehr-doh-wahn).
When the protests began I knew that there was a major Taksim Project that included undergrounding the streets, enlarging the square’s plaza, but I knew less about the park being replaced with a shopping mall. In this post I want to primarily cover the geography and uses of Taksim Square today and go over the proposed under construction Taksim Project including the controversial shopping mall.
You can learn more about the reasons for the initial protest here and here, and about a previous protest to protect a historic movie theatre that was to be demolished and rebuilt as a, you guessed it, a shopping center. There is much about the blossoming of the protest which you can read about here and here. You can learn more about the Taksim Army Barracks and the history of the square at labkultur.tv.
In a later post I hope to answer some questions including: How did a basic protest to defend a public space blossom into a national protest? Why would the fight over a park and public square be the catalyst for a national protest? And what does this say about our public spaces and how people and governments communicate and decide what to do with them? But for now, let’s look at the current square and the proposed future square.

Taksim Square is best known to Western tourists for its concentration of hotels, location at the end of Istanbul’s major shopping street, Istiklal Street, and being the northern terminus of a historic streetcar that runs down Istiklal Street between Taksim Square and Tünel Square near the Golden Horn.
Taksim Square is located in central Istanbul, situated north of the Golden Horn and the historic peninsula with the Hagia Sophia, and west of the Bosphorus strait. Istanbul’s central business district lies to the north as does an upper middle class shopping and residential neighborhood. The square as a whole comprises the following as shown in the map below:

The square is a major transportation hub with its bus transfer center and an underground metro station. Before Istanbul built its small but growing metro system, the only mass transit in the city was the massive and popular ferry system and the bus system, which includes jitneys. A metro station was opened at the square in 2000 and a funicular metro was added in the 2006 to link down to Kabataş and ferries on the Bosphorus. As mentioned earlier, a historic streetcar, popular with tourists, opened along Istiklal Street (Independence Avenue) in 1990 when the street was pedestrianized.

I mention all of this geography because it can be a bit confusing when you visit the square, as I have, so I know it would be confusing reading about it if you had never visited it. The mention of Taksim Square, Gezi Park, and Istiklal Street is confusing since most folks have never heard of these places and don’t know how they interrelate, especially when the park is confusingly called Taksim Gezi Park. Is it in the square or not? The simple answer is yes, the park is part of the "greater" Taksim Square area.

Moving forward from here, we’ll call the entire public open space (plazas and park) Taksim Square, while the sub-parts will be titled Gezi Park, Ataturk Plaza, and Metro Plaza. Istiklal Street, although a public street space, is separate from Taksim Square, and simply leads to the square. Knowing the local and regional geography also point to the dynamics of the current space and the proposed changes to the space.

The Taksim Project includes much more than replacing Gezi Park with a shopping mall. A massive project, it includes over a mile of tunneling to relocate vehicular traffic and the bus station underground. With traffic and streets removed from the surface, Taksim Square’s plaza areas would become a single, much larger plaza and lie beside the new shopping center. Let’s look at the details of each element.

The transportation aspect of the Taksim Project is in many ways the most dramatic, expensive and strangely disturbing. The five streets passing through the square would be undergrounded, with vehicles passing through a complicated set of interconnected tunnels. Due to the size of the square, and its five intersections, this is no small plan. I can only fear how it might feel in those tunnels during a traffic jam or how dark and dingy the underground bus transfer center could feel. In addition, a large underground parking garage will be included, with connecting ramps and tunnels to various surrounding streets. 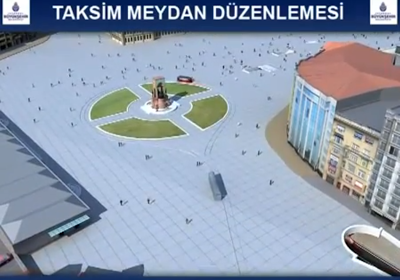 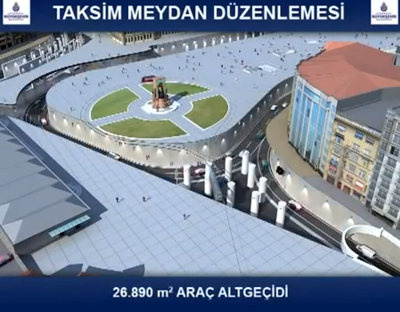 Gezi Park, which is about the size of New York City’s Washington Square Park, would be razed. A multi-use facility, built to look like the military barracks that once stood on the site, would replace the park. The Taksim Military Barracks would have a large green courtyard that would be used as a possible park space, but also an ice rink and hold concerts. The large building would include a cultural center, cafes, bookstores, an art gallery, a museum and an underground parking garage. This is the “shopping mall” that most news items refer to. By its official description it isn’t just a shopping mall, but would have many retail elements to it. I don’t know the details of the space in terms of retail vs. cultural space.

Taksim Square is already relatively large. However, being divided by a major street into two three plazas makes it somewhat less appealing and hard to navigate. The “Ataturk Plaza” links nicely to the pedestrian Istiklal Street with no streets separating the two. The historic streetcar charmingly turns around by circling the Ataturk Monument. The “Metro Station Plaza” lies to the east with the Ataturk Cultural Center beyond further east. To the north likes Gezi Park. North of Ataturk Plaza and southwest of Gezi Park is Post Office Plaza. All three plazas are separated by surface streets with 2 to 6 lanes of traffic.

With traffic undergrounded the plazas would unite into a single Taksim Square plaza. The square looks quite large – so big I sense it may be too large and feel empty. However, more recent drawings show some park like elements. In addition, with a city this size and the densities of people who visit the square, it might not be too large. It’s difficult to say. 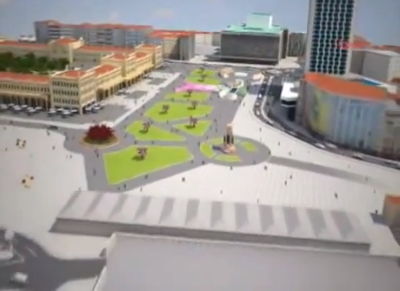 The Taksim Project is very grand. Comparitive projects exist, but most are not nearly as grand, especially regarding the plaza and the park-to-shopping mall elements. From a street and highway perspective it compares to Boston’s Big Dig, and to Paris’ subterranean street network at LesHalles. The redesign of the plaza part of the square is reminiscent of the smaller Times Square pedestrianization of Broadway, the proposals to remove traffic from Paris’ Place de la Concorde, and the smaller Picadilly Circus pedestrianization in London.
Converting a park to a shopping mall and cultural center has few comparison projects that I can think of. The only ones are pushing 5th Avenue through Washington Square Park in New York, which Jane Jacobs helped stop. We simply don’t have many examples in Europe or the Americas where a park was converted into a shopping mall. In San Francisco, Union Square was redesigned in the 1940s with the addition the world’s first underground parking structure. This raised the elevation of the square, but did not really destroy it.


Taksim Square and Gezi Park do need improvements. The square is overly criss-crossed with busy streets. An alternate solution to tunneling could have been to simplify the street layout and possibly cutting out connections to some small streets, or only allowing busses in the main east-west street corridor to the south. Some Turkish web sites and Twitter posts have acknowledged that Gezi Park is not the greatest park, but that many American parks were not so great in the past but were later improved. The same should be done for Gezi Park, just not through making it into a shopping mall that looks like a historic army barracks.
Email Post
Labels: barracks big dig bulldozers comercialization Erdogan freedom of speech Gezi Park Istanbul Istiklal mad plan park protest shopping mall Taksim Project Taksim Projesi Taksim Square urban design