Starting and finishing a project is a good thing. In the case of the Unbuilt San Francisco exhibit, the projects were never finished, or highly altered in their final design. In my case, I succeeded in my "project" of visiting all five exhibit locations earlier this month. The exhibit at UC Berkeley's College of Environmental Design ended earlier than all four others, and I caught it on its last day.

What did I learn from the exhibit in Berkeley.

The most surprising and exciting display was an audacious 1991 proposal from two architects, Byron Kuth and Liz Ranieri, to retain one single section of the Embarcadero Freeway as a "physical reminder of past planning mistakes." A detailed 3-D model is the main attraction (as seen below). The proposal called for "cutting a hole into the [section] and allowing a redwood tree to emerge." 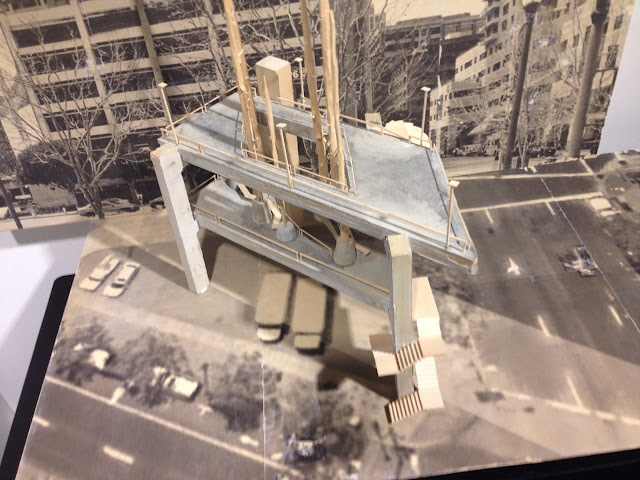 The upper deck would have had benches and allowed views of the bay. Although the couple pamphleted telephone poses and wrote a letter to The Chronicle that was never published, "We just couldn't get traction... Even our friends thought we were crazy."

I saw a piece of the Cypress Freeway structure in Oakland that was preserved for several months to perform tests. Seeing a single section of freeway alone was quite striking, both for knowing the death and physical tragedy of the collapse, but also the odd and hypnotically strange sight of a single section of freeway. If this proposal had been carried out, I believe it would have been beautiful, haunting, and a great reminder of a big planning mistake, not to mention, provide nice views of the Bay.

Too bad the Chronicle never printed their letter. The renderings would have looked more realistic with green redwood trees. All in all, I think this would have really been a great space pointing to the past, much like old city walls in European cities, and pointing to the future with the adaptive reuse of the structure. 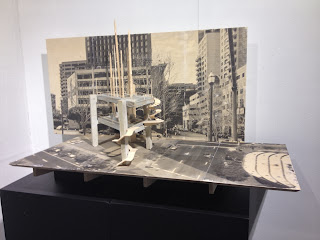 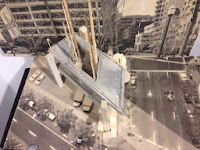 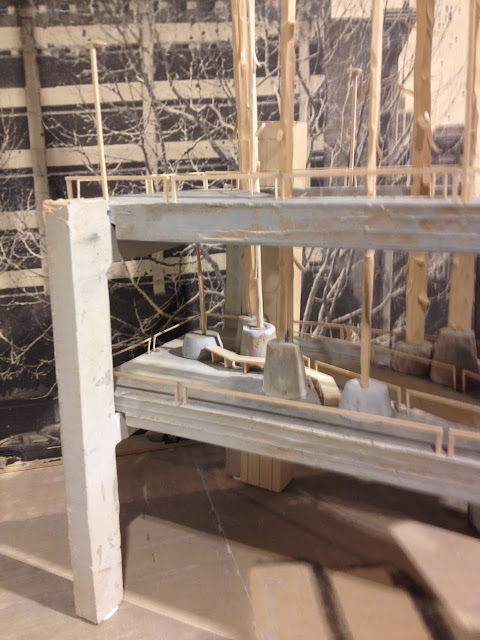 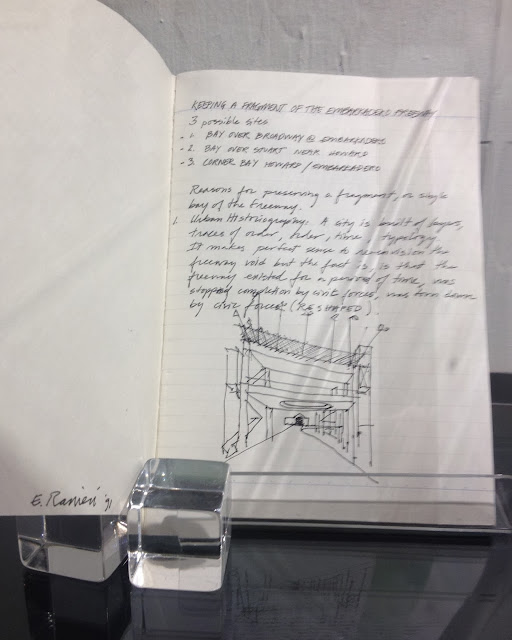 I wondered, where was this section of freeway to keep as a proto-High Line mini-park? And what's there today?

Location: The triangle lot of Embarcadero, Howard and Steuart.
Current Use: Asphalt open space.
Yes, that's right, the space that was once a freeway "wall" is nothing today, not even a green plaza. Granted, it's a small triangular lot, so it'd be harder than normal to build there, but I imagine a building or a park could fit in the space nonetheless.

I figured out where it was by noticing the parking structure looking building in the background of the model. Putting together Embarcadero and parking structure, I could only think of the one next to Gap, Inc. headquarters.

Interestingly, there is a proposal to tear down the parking structure and replace it with a residential high-rise. The proposal includes turning the triangular lot into a park space. Turning asphalt into a park, and a parking garage into more useful housing sounds good to me. At 31 stories tall (348 feet) it may seem a bit too high. Note that nearby towers Rincon Center (342 ft), The Gap Building (275 feet), Steuart Tower (364 feet), and One Embarcadero Center (569 feet) are all the same distance from the waterfront but the same height or taller apart from the Gap Building.

Talking about height. The surprise rendering on display was for the One Rincon Hill towers. One Rincon Hill is the double tower development at the foot of the Bay Bridge that sticks out dramatically. Apparently the original proposal was for two towers, 31 and 26 stories tall. Upon proposal to the Planning Department, planners suggested they build the towers much higher. So we now have 55 and 45 story towers instead. The building design was simply elongated. The height only bothers me somewhat, but you'd think a better design could have been made for such tall buildings. The design created worked better for shorter buildings, even if it was still rather plain.
Model I most wanted to see when the building was planned
The super slim Renzo Piano Towers. Very few renderings of these towers were published at the time. Although it was great to see the models and some images, they still didn't offer much detail of what they would have been like within the city's skyline. They could have looked just as they are, skinny square stacks.


Yerba Buena and the Moscone Convention Center - Cesar Pelli's Take
Pelli is getting his big building with the Transbay Tower and Transbay Center, but he once bid for another big San Francisco Project: The Yerba Buena Redevelopment including Moscone Center.  Note the gigantically wide and tall tower to have been located on Market Street where the Four Seasons now sits.

The exhibit space, including a model with a very tall Transamerica Pyramid. 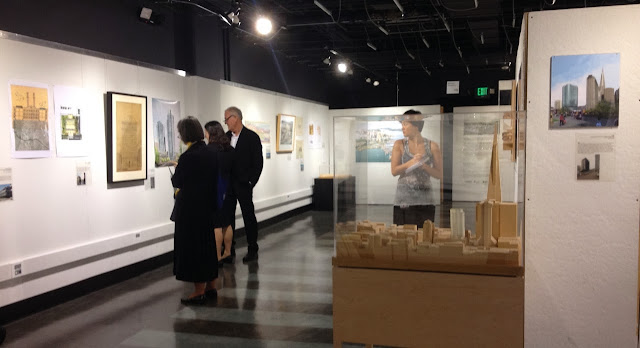 Green spaces on the bay. 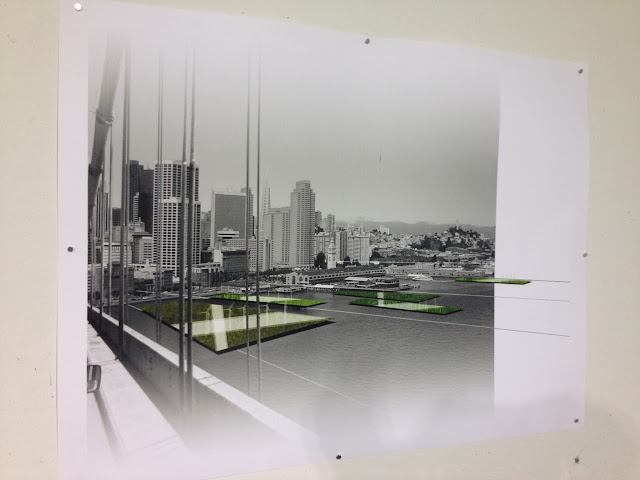 Early 1940s proposal for the Ferry Building. Not too different from what is there today. 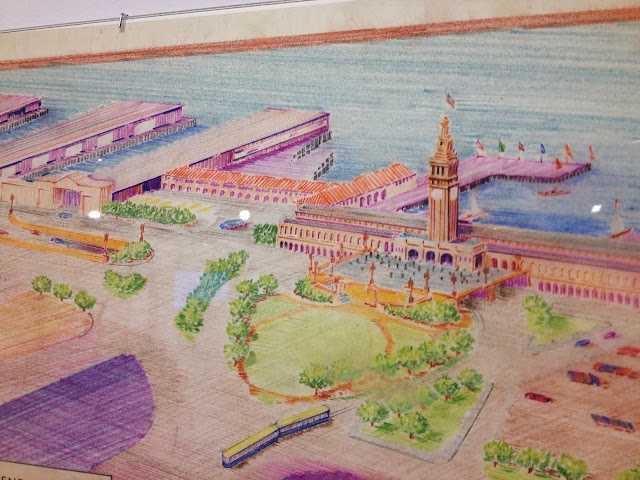 When planners considered creating a new Transbay Terminal, they needed to create a realistic vision of what could go there, especially from a use and built form point of view. These images highly informed what was presented by the three architecture firms that submitted designs. Note the green trees on the roof below, a park called "The City Eye." The covered plaza idea is shown in the second image. 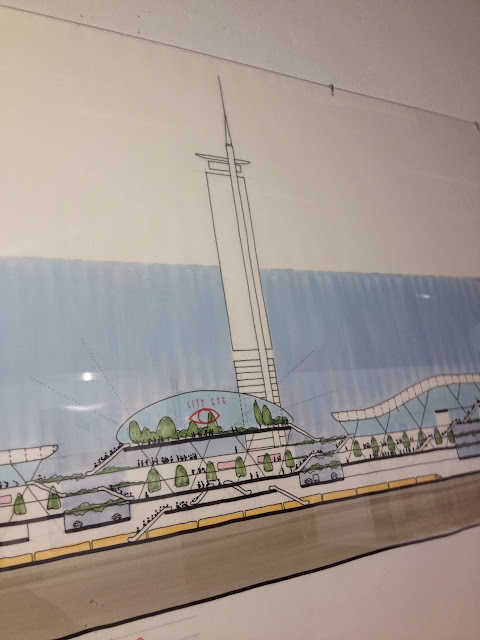 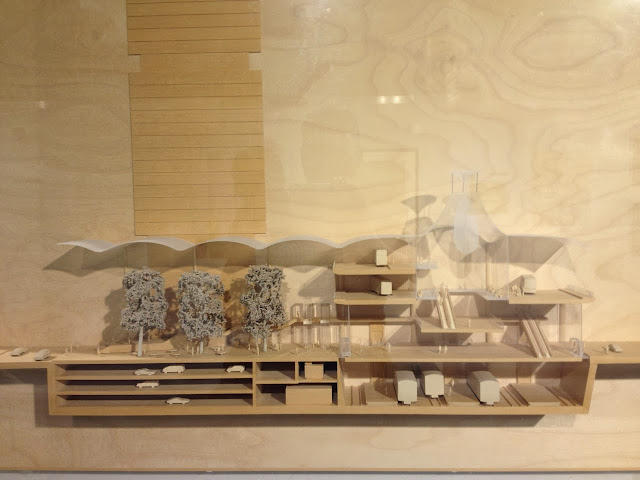