When: November 2013
What: South and north walls of the BART Level.
Comment: I went through the station today and sensed something was different or off about the station. Had new LED light been added? No the walls on the north(west) side had been cleaned, er sandblasted into bright white! The wall on the left is the south(east) side. The cleaning, although very welcome, is a reminder of how much dirt and soot from the Transbay Tube settles in the station.
The macrame artpiece get's all the negative attention at Embarcadero Station. However, the walls have a nice subtle circular theme, but until this cleaning, I didn't realize they were so incredibly dirty.
Related Posts: BART 70s Space Age Tiles 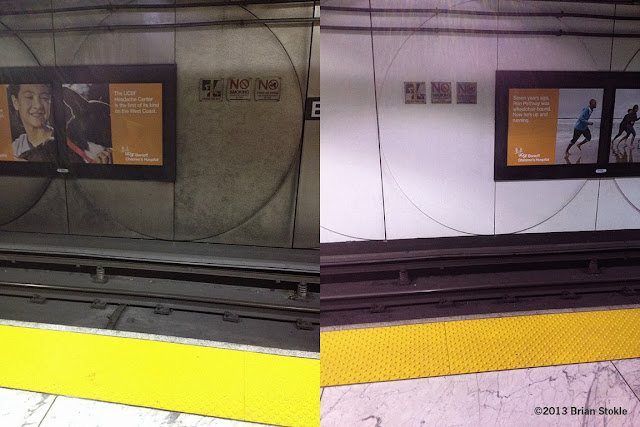 A post about cleanliness at Embarcadero Station would not be complete without reference and more info on the notorious macrame piece at the northeast end of the station. Find out more, including info on the less famous artpiece at the station, after the break.
The BART macrame....
Most of what I know about the piece is rumor. It's so heavy they couldn't water spray clean it for fear it would fall of its "mooring" due to the added weight from the water. Rats and other rodents make it home. The artist cannot be reached for attempts to relocate it.
Other art piece:
A tall blue art piece (also a bit greyer than blue in spots due to the grime) is on the southwest end of the station. I can't seem to find anything much about it. or any photos, but I'll update you when I find info. The piece is a tall blue sculpture thing called "Wall Canyon" and was done by Stephen de Staebler. Due to its form, I don't believe it has any issues with rats, however it looks like its blue hue may have significantly faded.