Talk of a 2nd Transbay Rail Crossing has gained a bit of a bump in the last few weeks due to a few new things:

So I've finally come to a very late annual edition of where a BART and Caltrain tube and tunnel (and maybe bridge) system should go. (Other editions happened in 2013, 2015, 2016) In I'll be looking at where they trains could go, the tradeoffs, the opportunities, the challenges, and the timing. In past installments, I've only looked at San Francisco, but I'll also be looking at Oakland too this time.

Rather than looking at all the alignments all at once (like I've done before I think taking a slower approach will give a chance to better look at each possibility on its own. This time around I'll be also trying a new approach - calling the alignments by unique non-geographic names. Because I'll be showing both BART and Caltrain/HSR and Muni, creating names by major streets would get really long and confusing.

I've also oriented the maps a bit differently so as to jog my mind and perspective a bit to be open to new ideas and catch weaknesses I may haven't seen before. In San Francisco the perspective looks eastward with the bay at the top of the image, and Geary running up and down to the bottom of the image.

We begin with San Francisco and the "Lindsay Boxer Discovery". You can learn about the other options here: Midge's Delight (12/30) 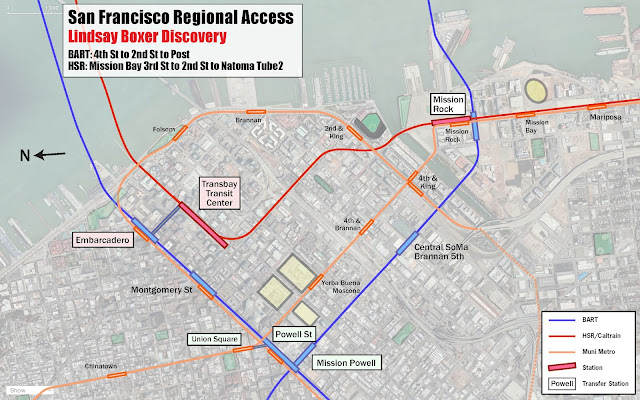 Phasing
With two new crossings, the BART or Caltrain/Crossing could come first with the other crossing added later. Building the DTX would be first followed by a new crossing. Separating crossings could be well intended, but the 3rd crossing might take decades to build, or never be built.

In Summary
This option has a lot to like. It's easy to read on a map. Connections between rail systems is quite easy, and it has stops at many new developing areas where ridership will be high. The main downside of the option is that it provides a less than seamless transfer from BART to the Transbay Center (1000' tunnel under Beale from Embarcadero). However, transfers from BART to Caltrain on the 2nd Crossing would be seamless at Mission Rock. In addition the option does not provide a Financial District station for the 2nd BART line, which could risk not reducing crowding on the existing line.

With the 3rd Rail Crossing of Caltrain/HSR from Transbay Transit Center, maybe a TB2 Transbay Center station is unnecessary. Of course having TWO new rail crossings that are separate would be significantly more costly than a single new crossing.