Moving: Rainy Day on the 33

The 33 Stanyan bus is one of the most scenic Muni bus routes. You travel through the Mission, Castro, Twin Peaks, Haight, and on to the Richmond. This includes going over a mountain, passing through three business districts streets (Mission St, 18th St at Castro, and Haight Street) while passing the Valencia and Clement corridors and ending close to Laurel Village at California Street. 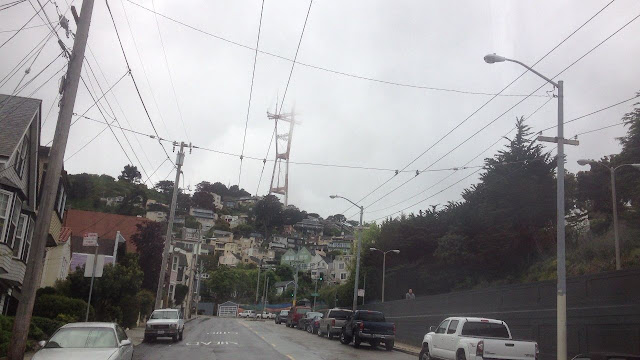 Most famously, the route includes one of the most dramatic u-turns an electric trolleybus takes in San Francisco. Whether climbing up Twin Peaks, or coming down, when the bus passes through the intersection of Market Street and Clayton Street, as shown in the image below, you always wonder if the driver will pull off the turn without the trolleys falling off. Orange arrows are going uphill towards the Haight, while yellow arrows show the path of where the 33 Stanyan bus goes downhill towards Eureka Valley and the Castro.

The video below shows the journey as viewed out of the back of the bus from Ashbury Street just above Frederik, up over the 17th Street saddle onto Clayton, loop a "u" at Market & Clayton, down to 18th Street, past Dolores Park and finally ending (rather abruptly) at Valencia Street. Note the following moments:

The music is from the film Run Lola Run. Kind of makes you believe Muni really can move fast!