Hosted by the Sklar Brothers, the show presents lots of statistics in a fun way, thanks to the brothers' comedy and lots of effective graphics and funny situations. The first episode was about living and dying. The second episode, which aired last week, describes the 7 inventions that most affected why and where we live. 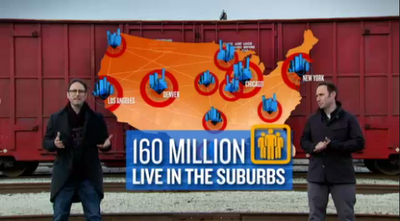 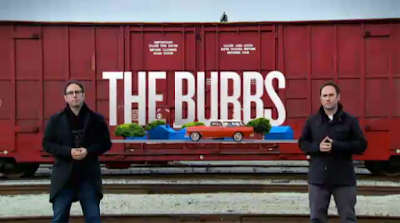 Contrary to popular visions of America, we haven't always lived in single-family home suburbs, miles away from city centers.  Before the 1920s, most people lived in rural areas, while a smaller group of us lived in dense city environments. Most cities had 2-5 story buildings. The show goes through a countdown of the inventions helped change how and where we live. 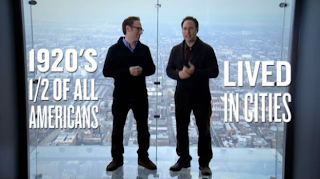 The Sklar Brothers are identical twins, and nicely introduce the show with this intro:
"Numbers are everywhere. But unless you know how to decode them, they're just numbers. That's where we come in. We're the Sklar Bros. We started life as a cool stat. We're twins. 1 egg, 2 babies, a 3 in 1,000 occurrence. Does this give us special powers? Hell yeah!"

Full disclosure, I am a twin, and my wife knew the Sklar Brothers back in their high school years.


Below is a nice video introducing the Sklar Brothers. 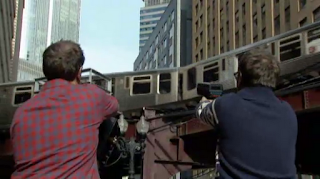 The show starts out in Chicago with the brothers using a speed gun to see how fast people walk, and ride a horse. They make references to how many days it would take to get from New York to Chicago. Suffice it to say it's in the days and weeks (the video was taken down from the web site to show the newer episode so we can't verify the times. They stumble upon an El train and make their discover that it's 4 times faster than walking and twice as fast as a horse.
The railroad, which spread rapidly in the mid-1800s, allowed folks to go great distances between cities quickly. More importantly, it allowed Americans to move West much more quickly than they had over the previous 100 years. Not mentioned in the show, but the railroad lead to urban rail transit. First the horsecar and elevated locomotive commuter rail, then the cable car, followed by the streetcar, and finally the subway.

#2 The Elevator and #3 The Steel Frame (aka Skyscrapers)

Several factors came together to allow for dense living in taller buildings. Previous to the late 1800s, height of buildings were mostly limited to how high people were willing to go up stairs. That was 5 stories in most places, although cities like Paris and Edinburgh went up to 7 and 8 stories. Even if we were willing to climb higher, buildings were either built in wood, brick or stone. Brick and stone buildings can be built higher than wood, however their bases must get thicker and thicker to bear the weight.

The invention of the elevator, and Otis' safety brakes made it easier for people to go higher. The invention of the steel frame lead to very tall buildings - lead to skyscrapers from 30 to 100 stories high. One great exercise showed how city densities changed pre-elevator/skyscraper. The Willis Tower (former Sears Tower) would take up 16 square blocks if it were 5-6 story buildings. With the elevator and the steel frame it goes up to 110 floors. That's density. 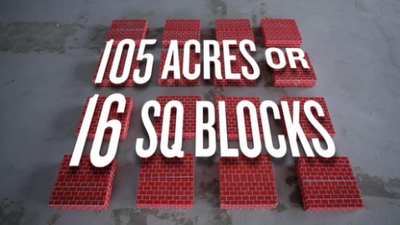 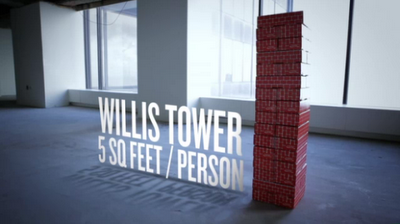 The automobile and highways (aka freeways or expressways) have most famously shaped where we live. With Ford's affordable and mass produced Model T, millions of middle class Americans could afford a car in the 1910s and 1920s. Less known is that the highway, or more jargony "grade separated highway" was in fact invented in the United States. The Bronx River Parkway opened in 1922 and is the first road in the country to use a median and the first with bridges to carry traffic from cross streets over it. Other critical refinements like ramps and interchanges came later from Europe and America, but it was the building of cross-street bridges that was the most ingenious but simple way to to address traffic congestion and allow for faster driving speeds. 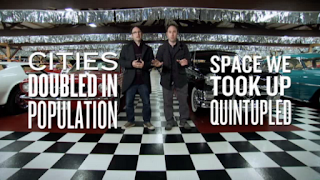 In terms of where we live, it was the Federal government's subsidizing freeways and expressway construction that allowed for their great spreading across the nation. Although funded in part by a gas tax, the federal government paid 90% of the cost, while states paid 10% and decided where the highways went (except at state and int'l borders). This lead to states asking for highways to built virtually everywhere. When you have free pizza, why orders just one, order five or ten or 20!. The same happened with highways.
The combination of highways, the automobile and some cost incentives and building construction innovations lead to 1/2 of America living in the suburbs.

Although air conditioning and airplanes have affected where we live in the country, such as moving to the Sun Belt (air conditioning), and going on business trips or moving to far away cities for a new job (airplane), these two inventions haven't really affected what type of city or rural area we live in. The automobile and highways have affected us more in moving to the suburbs than any of the other inventions on this list.

As mentioned earlier, several critical factors that aren't technically inventions have significantly shaped where we decide to live.

In the 1940s, after 15 years of Depression and World War II, America had a tremendous housing shortage. Very little housing had been built over that time and our population had continued to grow. With the war won, our industrial capacity and economy unmatched (largely due to the wars destroying their economies and industries), the US government promoted homebuying, especially into single family homes.

William Levitt proved that you could build hundreds of homes at a low cost and fill them with middle class Americans who bought them (with help of mortgage tax credit). By its final completion in 1951, Levittown, NY, was a huge success that Levitt and others reproduced throughout the country. Essentially, Levitt is the godfather of the suburb.

We are no experts on this factor, but with many cities receiving new minority residents, mostly African Americans, many White Americans felt uncomfortable, to put it diplomatically, living in the same neighborhood. Combined with rising standard of living, ability to own a car, and the ideal image of owning a single family house with a lawn, millions of White Americans left the city for new suburbs.

Finally, the fact that gasoline was so cheap during most of the 20th Century allowed people to affordably live far from work and drive everywhere rather than taking transit or walking (or driving short distances).

One has to wonder, what where would we live and what would America look like if we hadn't incentivized highway construction, house buying, and maintained cheap gas prices. We probably would look a lot like Canada or Australia. They both have highways and suburbs, but not nearly to the extent that America does. Their transit systems are more comprehensive and user friendly, and they live somewhat more densely.

Now in the 21st Century, we're seeing that less affordable gas, traffic congestion on those highways and suburban streets, and often a more expensive and less healthy living environment is making many decide to move back into the city.

(All images courtesy History Channel and United Stats of America)