Much attention, and deservedly so, has been given to Dolores Park's new Helen Diller Playground. Sure, it's got a view, amazing slides, and an amazing view. However, for many Mission residents, it's up a hill and in a park that's simply crowded much of the time. Lucky for residents, the Mission Pool and Playground Renovation will provide a playground in the flats of the Mission and possibly spread out playground use between the new playgrounds.


Although a medium sized recreation area, the Mission Pool and Playground has historically felt like multiple distinct and unrelated pieces.
1) Mission Pool, the only public outdoor pool, faces 19th Street.
2) Entry Park to the pool at Linda Street
3) the soccer field, basketball court and tennis courts are tucked behind the pool building along Linda Street.
4) a playground we never knew existed due to not facing a street
5) the entry plaza facing Valencia Street. 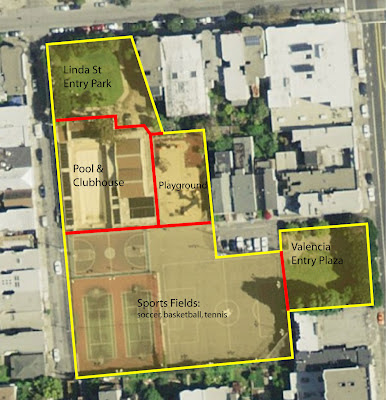 As shown in the image below, the entry plaza on Valencia Street was always problematic. Although it had a nice patch of grass, seating, and planted areas with lots of trees, it never felt open to the street, the lawn was too small to do any playing, and the seating never felt very inviting. Maybe it was the clientele, the shade or the fact that it wasn't designed that well for a 21st Century city. Situated in the denser Mission District, between Borderlands Books (a sci-fi/fantasy/mystery bookstore), and Range restaurant, it would seem to be well placed in a busy foot traffic area. However, before the renovation, the area facing Valencia Street was uninviting with a long cyclone fence and low cement wall below the cyclone fence. Consequently it was underutilized.

We don't really know, but hopefully the new design will be more inviting and beckon Valencia pedestrians into the park, whether they plan to swim, play soccer, or just relax at a bench.


The new entry plaza is open with much less fencing and is truly inviting to enter, even before it opens. Part of the draw is through a double wide sidewalk in front of the playground. Although the original plans seemed to show the standard width sidewalk and two trees, it appears the design was adapted in favor of the more open and inviting design. The two arching design objects look fun and inviting. However, as mentioned in a comment, we're not sure what they're meant for. Seeing as they're not in the blue soft zone where the climbing object and the swings are, it could be more of abstract object with no active purpose. We suspect, though, that it will have something added to it that will give it more purpose.

With the official ribbon cutting opening this Tuesday, May 22, we look forward to more use of this new playground and the other improvements to its fields and pool. 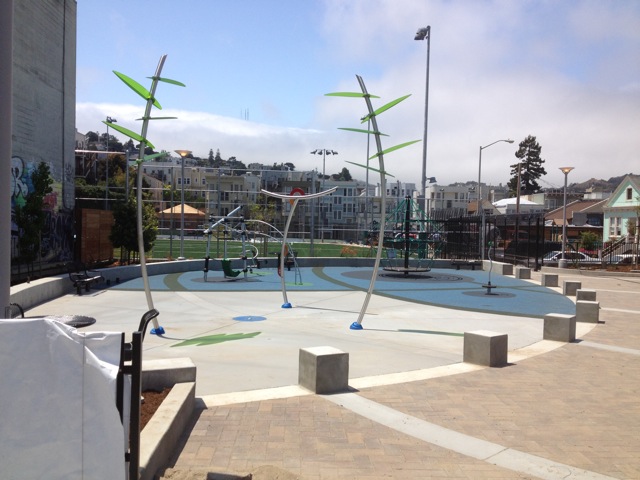